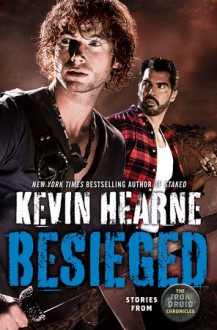 • In ancient Egypt, Atticus agrees to raid a secret chamber underneath the library of Alexandria, dodging deadly traps, only to learn that on-site security includes two members of the Egyptian pantheon.
• At a Kansas carnival, fun and games turns to murder and mayhem, thanks to soul-snatching demons and flesh-craving ghouls luring visitors into an all-too-real house of horrors.
• Verily, in olde England, striking up a friendship with William Shakespeare lands both Atticus and the Bard in boiling hot water with a trio of infamous witches.
• During the Gold Rush, the avatar of greed himself turns the streets of San Francisco red with blood and upsets the elemental Sequoia. Atticus may have to fight fire with fire if he’s going to restore balance.

3 years ago
http://irresponsiblereader.booklikes.com Irresponsible Reader 4.0 A must for Iron Druid fans
text A must for Iron Druid fans
"Tell me about the old days, Atticus, when you were wee and had to walk both ways uphill in feces because no one had toilets." Granuaile's request for a story around the campfire during her training sets the stage for this collection of stories from The Iron Druid Chronicles, primarily about events ...
See review

3 years ago
http://Twimom227.booklikes.com That's What I'm Talking About 4.0 #Audiobook Review: Besieged by Kevin Hearne
text #Audiobook Review: Besieged by Kevin Hearne
Besieged is a collection of tales all set in the Iron Druid world. All but the last few are not directly related to the current storyline. Many are fun recountings of events in the long lives of these characters. *Note: I could not find a listing of the story titles within the book, so I did my b...
See review

3 years ago
http://Elentarri.booklikes.com Elentarri's Book Blog 2.0 Besieged (The Iron Druid Chronicles) by Kevin Hearne
text Besieged (The Iron Druid Chronicles) by Kevin Hearne
This is a collection of short stories in the Iron Druid universe. I found most of the stories to be rather bland - same stuff, different day. There were one or two stories that were different, but most were of the all-powerful druid killing the bad guy variety. In short, an ok read but I know the...
See review
see community reviews