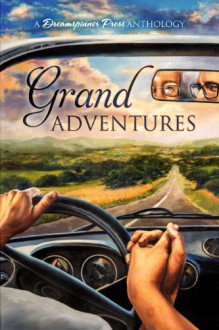 The authors in this anthology donated their talent as a way to support Eric's continued recovery, to help bring strength to TJ, and to show both of them just how much love surrounds them. Grand Adventures is a diverse range of stories about the journey of love. We’re going on some grand adventures for a great cause. Thank you for joining us.

One hundred percent of the income from this volume goes directly to TJ and Eric.

8 years ago
http://MyFictionNook.booklikes.com Sandra @ My Fiction Nook 5.0 Book Review: Grand Adventures Anthology
text Book Review: Grand Adventures Anthology
Huge kudos to all the fabulous authors who participated by writing a story in honor of TJ and Eric, to everyone at DSP involved in publishing this book, and everyone who purchased a copy. So many awesome stories inside, but what struck me most of all were the forewords each story came with. The...
See review

8 years ago
http://DebraE.booklikes.com Debra E's Never-Ending TBR 0.0 Grand Adventures
text Grand Adventures
So many great authors contributing to this one with 100% of the profits going to Eric Arvin and TJ Klune. Available for pre-order here . Out March 31, 2014.
See review
see community reviews