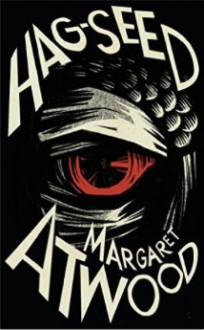 Felix is at the top of his game as Artistic Director of the Makeshiweg Theatre Festival. His productions have amazed and confounded. Now he’s staging a Tempest like no other: not only will it boost his reputation, it will heal emotional wounds.

Or that was the plan. Instead, after an act of unforeseen treachery, Felix is living in exile in a backwoods hovel, haunted by memories of his beloved lost daughter, Miranda. And also brewing revenge.

After twelve years, revenge finally arrives in the shape of a theatre course at a nearby prison. Here, Felix and his inmate actors will put on his Tempest and snare the traitors who destroyed him. It’s magic! But will it remake Felix as his enemies fall?

3 years ago
http://surreysmum.booklikes.com A Scottish-Canadian Blethering On About Books 4.0 Hag-Seed (Atwood)
text Hag-Seed (Atwood)
This is Margaret Atwood's re-telling of The Tempest, set in a Canadian prison. It's part of a series of commissioned re-tellings of Shakespeare, by a variety of authors. Damn, that woman is clever. I don't go to her if I'm looking for emotional comfort, for sure, but I love watching her the way I ...
See review

For the Love of Stories : the Rebooted Book Review Blog rated it

4 years ago
http://BostonKate.booklikes.com For the Love of Stories : the Rebooted Book Review Blog 3.5 Hag-Seed
text Hag-Seed
Hag-Seed: The Tempest Retold Margaret Atwood, 2016 Felix, the eccentric Artistic Director of the Makeshiweg Festival, is getting ready to present his interpretation of Shakespeare's The Tempest, but is removed from his position thanks to the underhanded methods of his assistant, Tony. After goin...
See review

4 years ago
http://kathyannecowie.booklikes.com Blah, Blah, Blah, Book Blog 4.0 Hag-Seed
text Hag-Seed
I am a huge Margaret Atwood fan, so when I saw a new book with her name on it I did not even bother to read what it was about. Who cares? Margaret Atwood could write a software manual and I would read it. Maybe you feel more discerning than me, I'm ok with that. I've read at least half a dozen Atwoo...
See review

4 years ago
http://edwardlorn.booklikes.com Lornographic Material 1.0 Hag-Seed DNF Review
text Hag-Seed DNF Review
The Tempest is one of my favorite works by Billy Shakes. For that reason, I thought I'd love this. This is my first Atwood book and I doth believe she's not for me. I wouldn't have bothered to review this, but it's a review copy, so here you go. A one-star DNF review. Sad panda.
See review

4 years ago
http://thursday48.booklikes.com Lindsay's Book Log 4.0 Hag-Seed
text Hag-Seed
Nothing in this book is surprising because it’s a retelling. However Atwood is skilled and it was done really well. I do think there may have been a lot of underlying commentary about Canadian Politics, based on comments Atwood made regarding the dates in the book, which I missed because I’m not Can...
See review
see community reviews