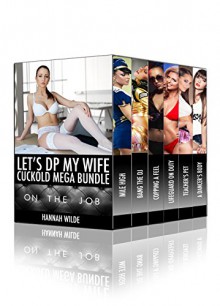 There’s a lot of perks that come with being married to a sexy flight attendant, not the least of which are free trips around the world on the weekends. Paul and his wife, Harley, are living the high-flying good life.

When Harley seems to be getting a little too friendly with her hot male co-worker, however, Paul’s life is thrown into a tailspin as he realizes how much it turns him on to see his wife with another man.

Soon the three of them are soaring above the clouds, locked in an airplane restroom where there deepest hotwife double penetration fantasies are coming to life.

Having a superstar DJ for a life partner can be surreal, as Victor quickly learns when his wife, Mason, makes a dance music album that explodes online overnight. Soon they are dealing with more flirtatious fans than they ever imagined, and testing the limits of their marital freedom.

Victor eventually discovers, however, that the sight of his beautiful wife flirting stirs up all kinds of strange feelings. As the couple drift deeper and deeper into a backstage hotwife fantasy, will they stop the music or go all the way in a hardcore double penetration?

It’s hard having a cop as your wife, but Morgan and Jasmine make it work with honesty, communication and a healthy sex life. When Jasmine reveals her attraction to her new partner, however, thing’s start to get heated.

It looks as though all is lost, until the couple is pulled over on the drive home… and thrown into a hardcore traffic stop double penetration!

It’s not hard to notice Ken’s gorgeous wife, Rachel, bouncing up and down the beach as the local lifeguard. There’s no denying that Rachel could have any man that she wanted, but the fact that she’s stuck with Ken has always made him proud.

They have the perfect marriage, or so it seems, until Rachel starts to get restless in the bedroom. Ken tries to jumpstart their sex life by allowing a little harmless flirting with other people, but soon enough things are spinning out of control and the couple find themselves in the middle of a hardcore double penetration!

As a young married couple, Hal and Rosie are ready to get their new life together started, but first Rosie just needs to graduate college. With only a few weeks left, the last thing they expect is for Rosie to fail the final in her human sexuality course.

Due to an unfortunate misunderstanding, Rosie’s professor now thinks that she’s a bigot against the swinger lifestyle, which the professor is openly a part of. he’s openly a part of. It’s up to Hal and Rosie to show her professor that they can swing with the best of them… in a hardcore double penetration!

Ian is a lucky man. Not only is his wife, Alana, funny, charming and intelligent, she’s also a dancer with the body that comes along with it. But when Alana starts to hint at feelings for her handsome new dance student, Ian soon realizes that he might need to learn to share.
show less
Format: kindle
ASIN: B00SGHJ8V6
Publish date: 2015-01-19
Pages no: 104
Edition language: English