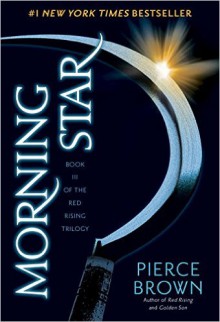 But devotion to honor and hunger for vengeance run deep on both sides. Darrow and his comrades-in-arms face powerful enemies without scruple or mercy. Among them are some Darrow once considered friends. To win, Darrow will need to inspire those shackled in darkness to break their chains, unmake the world their cruel masters have built, and claim a destiny too long denied—and too glorious to surrender.
show less
Format: Hardcover
ISBN: 9780345539847 (0345539842)
ASIN: 345539842
Pages no: 544
Edition language: English
Category:
Fantasy, Science Fiction, Action, Dystopia, New Adult
Series: Red Rising Trilogy (#3)

5 years ago
http://TinaTome.booklikes.com Paint the Town Read 5.0 Morning Star
text Morning Star
This slaggin' series has made my eyes sweat more than any other in a long (I'm talking not since Harry Potter long) time. It's so.... You connect with the characters. All of them. You feel for the bad guys, even. Everyone has their struggle. They all have something that you can connect to. Even the ...
See review

5 years ago
http://HeatherTuriello.booklikes.com Wandering through the pages... 5.0 Morning Star
text Morning Star
I'm a little late to the party in reading this series. It's been on my TBR list for a while. I'm going to review all three together, but will avoid spoilers. This is a wonderful series. At first I classified it as YA, but it's really New Adult or a Crossover genre with adult. I also think it will ap...
See review

6 years ago
http://andyluttrull.booklikes.com Turn The Page 4.0 Book #848 - 342,033 Pages Read
text Book #848 - 342,033 Pages Read
The trilogy ends on a solid note, an impressive effort by fairly new author Pierce Brown. Brown does a magnificent job of describing the conflict and pain Darrow feels as he escapes capture and reunites with his friends and colleagues to form the backbone of the Red Rising Rebellion (I made that phr...
See review