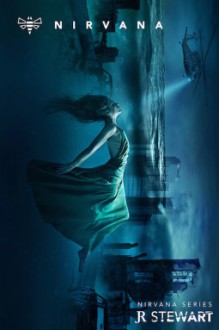 Larissa Kenders lives in a world where the real and the virtual intermingle daily. After the supposed death of her soulmate, Andrew, Larissa is able to find solace by escaping to Nirvana, a virtual world where anything is possible – even visits with Andrew. Although Larissa is told that these meetings are not real, she cannot shake her suspicion that Andrew is indeed alive. When she begins an investigation of Hexagon, the very institution that she has been taught to trust, Larissa uncovers much more than she ever expected and places herself in serious danger. Her biggest challenge, however, remains determining what is real – and what is virtual.

Nirvana is the first instalment in the three-part “Nirvana” series, a fast-paced, page-turning young adult trilogy that combines elements of the romance, mystery, and science fiction genres. This first novel introduces readers to a heroine who refuses to give up on the man she loves, even if it means taking on an entire government to do so.
show less
Format: ebook
ISBN: 9780993639777 (993639771)
ASIN: B014LLM1XW
Publish date: 2015-11-10
Publisher: Blue Moon Publishers
Pages no: 186
Edition language: English
Category:
Young Adult, Science Fiction, Science Fiction Romance
Series: Nirvana Series (#1)

4 years ago
http://anauling.booklikes.com Fallen Over Book Reviews 4.0 NetGalley Review: Nirvana
text NetGalley Review: Nirvana
I received this book via NetGalley to give an honest review. So it took me three times to start this book, I am not sure why but the first two times it just did not capture my attention right off the bat. Once I started reading it though I was interested to see where it was going to go. You see I h...
See review

4 years ago
http://UrlPhantomhive.booklikes.com Url Phantomhive 3.0 Nirvana
text Nirvana
I was confused even before I started reading, since on my Kindle I had two versions of this book. Two different versions. Before I had the chance of reading my copy I'd received a message which urged me to redownload the titles as there had been changes to the book. I thought, at that time, it were ...
See review

4 years ago
http://Almondine.booklikes.com Inked Brownies 2.0 Nirvana
text Nirvana
This is a great example of how you shouldn't judge a book by its cover. I think the cover looks fantastic. I have to admit to being a tiny bit biased because I'm really into blueish toned covers. Yet even if it wouldn't have been blue, I still would have thought: "Hey, this seems like something I'd ...
See review

4 years ago
http://maryeve.booklikes.com Lagniappe Literature 3.0 NIRVANA
text NIRVANA
Finally finished this book...again. I was just about finished when I received an email from publisher asking if I'd be interested in reading a newer version. I was promised a better story. Well, I gotta say, I was a little frustrated but I was also at that point in book where all was about to be rev...
See review
see community reviews

A Standard history of Champaign County I...