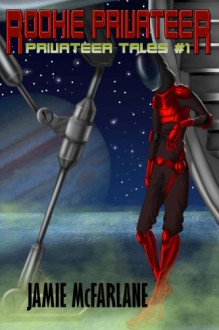 Liam dreams of sailing the stars. Whenever he gets the chance, he jets into space and floats, wishing to be free of the asteroid that has claimed him. What he doesn't realize is that fate is about to change everything.

He and Nick are about to find out what the real world has to offer and they end up meeting exciting people along the way.
show less
Format: kindle
ISBN: 9781943792009
ASIN: B00JT2LEOG
Publish date: 2014-04-19
Publisher: Fickle Dragon Publishing
Pages no: 275
Edition language: English
Category:
Science Fiction, Space Opera

4 years ago
http://mojacobs.booklikes.com Beemo's Books 0.0 Mildly Surprised
text Mildly Surprised
I received this ebook free from joining the author's mail list. Hey I like freebies and space opera so what can go wrong. I wasn't expecting much, but was happily surprised the story was good. Space operas fit a nice genre, we get a crew- usually inexperienced in some way; a space ship of some so...
See review

The Surly Dragon rated it

5 years ago
http://thesurlydragon.booklikes.com The Surly Dragon 3.0 Review
text Review
A thoroughly enjoyable pulp sci-fi novel for a young reader (not too young as there were some references to sex and prostitutes... not to mention violence, I'd say on the younger end of the young adult set). Some Gary/Mary Stus, but those are staple in pulp.
See review

5 years ago
http://FatherCraneMadeMeDoIt.booklikes.com FatherCraneMadeMeDoIt 2.0
text
I received a copy of this book from Booklikes in exchange for an honest review.In no way was this a bad book. If anything I was a bad reader for this particular book. I hate reviwing books that were well written but not my style. Here it goes.McFarlane's writing is very matter-of-fact, straight forw...
See review
see community reviews