Log in with Facebook
or
Wrong email address or username
Sign up
Already on BookLikes? Log in!
Incorrect verification code
Please, check your email, the code to access your BookLikes blog was sent to you already.
Enter code:
« Back Send
back to top
Search tags: 1001 This is a SUPER early review, but that's meant to encourage anyone who has an ARC to read and review it and pre-order along with those who don't have one, and/or spread the word. Also, there will be no spoilers. 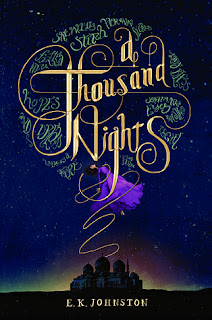 Lo-Melkhiin killed three hundred girls before he came to her village, looking for a wife. When she sees the dust cloud on the horizon, she knows he has arrived. She knows he will want the loveliest girl: her sister. She vows she will not let her be next.

And so she is taken in her sister's place, and she believes death will soon follow. Lo-Melkhiin's court is a dangerous palace filled with pretty things: intricate statues with wretched eyes, exquisite threads to weave the most beautiful garments. She sees everything as if for the last time.But the first sun rises and sets, and she is not dead. Night after night, Lo-Melkhiin comes to her and listens to the stories she tells, and day after day she is awoken by the sunrise. Exploring the palace, she begins to unlock years of fear that have tormented and silenced a kingdom. Lo-Melkhiin was not always a cruel ruler. Something went wrong.

Far away, in their village, her sister is mourning. Through her pain, she calls upon the desert winds, conjuring a subtle unseen magic, and something besides death stirs the air.

Back at the palace, the words she speaks to Lo-Melkhiin every night are given a strange life of their own. Little things, at first: a dress from home, a vision of her sister. With each tale she spins, her power grows. Soon she dreams of bigger, more terrible magic: power enough to save a king, if she can put an end to the rule of a monster.

This is the book to read if you want a Middle Eastern inspired fantasy. I confess: most of the time, Middle Eastern inspired work catches my eye, but I avoid reading it because I get overly critical. It's easier for me to feel like an American writing about the Middle East - well, while reading, I feel *that*; that, very rarely, do I get the sense that the culture is authentic and captures the Middle Eastern spirit well. I am not Middle Eastern, but all my relatives are, and I have grown up surrounded by this culture and wishing for it to be better portrayed. Also, I tend to avoid 1001 Nights retellings because if they are a romance, they often will romanticize the piece of shit king who's killing girls (often it's because of a curse, you see, the king is not a flawed douche, he only does what he does because he's forced to - a framework which not only romanticizes what happened but in blaming any flaws he might have on a "curse," also makes him a much less interesting character) and because of the inherent sexism of the framework (not only the killing girls but also feeding into the whole "Scheherazade is the *only* girl who could captivate the king;" she's not like the "other" girls who were too stupid and got killed). Another thing: most Middle Eastern mythology and folklore have a religious background. There's no avoiding references to God and the like, and yet many retellings do not get into the religious aspect (how can you be authentic to the Middle East if you don't get into the HUGE part religion has played? Yes, there are Middle Eastern atheists, but for the most part, religion is a HUGE part of every day life and has been for a LONG time) because that's a sticky issue and oh well.

This book addresses ALL OF THAT and more: stories have a power larger than life in A Thousand Nights. E.K. Johnston has written a retelling that is faithful to its original material but also something entirely of her own making.

The awesomeness of A Thousand Nights:

a.) The desert atmosphere / wonderful world building. Oh my god, if you want a book that will make you SINK into the setting, this book IS SO GOOD AT THAT. All the details make for such a lush setting and it was not at all surprising to learn that E.K. Johnston had spent time in Jordan. There are many details about the world inside the qasr and the clothing each character wears and the time period that also make it SO easy to fall into Johnston's wonderful writing. So authentic, so beautiful, so atmospheric. When I'm at home again and with my BEA ARC, I will try to remember to add a quote for y'all to see what I mean.

b.) The quiet strength of the main character. There's so much dialogue out there about what makes a female character strong, and how often times people will only perceive the "kickass sword-wielding" girl to be strong. No. The MC here is so strong, and it is an absolute treat to see her grow throughout the book, from the girl who would step in for her sister to the girl who would meet all the challenges presented to her, knowing that her death could come at any moment.

c.) The Middle Eastern feel. Point A helps, but Johnston, in her dialogue and characterization, also does well to capture Middle Eastern attitudes about family and life. One of the main points of 1001 Nights is the importance of stories, which is something Johnston also does well to highlight with her magic system, feminist themes, and inclusion of lesser known fantastical creatures from 1001 Nights. Something that has differentiated A Thousand Nights from its source material is the religious system that Johnston introduces (smallgods). This definitely helps with the themes and ME feel and desert atmosphere as well.

d.) This book is EMPOWERING. Johnston took an inherently sexist tale and gave the power back to the women who are not always mentioned. YES.

e.) Unlike most other YA out there. This book has the feel of a legend, and it is gorgeous and unlike many other things that I've read.

Not everyone will like this. It's written in a more literary style. The only name you are told for a long time is Lo-Melkhiin, which works within the framework to address the inherent sexism of 1001 Nights and the attitude in the fantasy world. Most people are thus labeled by who they are related to (e.g. "my father's father's father," "my sister," "my sister's mother"), which is also realistic to the Middle East (cc: all the men who are called "Father of -insert firstborn son's name here-;" I still don't know the name of my great aunt because they always refer to her as Imm George). It's also not very fast-paced and full of action but instead is a quieter tale, fitting within the framework and the atmosphere of the silent, cruel desert. I would recommend this to fans of CRUEL BEAUTY, but keep in mind that this has less romance and more internal focus on the setting and main character's growth. It reminded me of CRUEL BEAUTY because of the sisterly relationship, the way E.K. Johnston and Rosamund Hodge have written their retellings, and the focus on internal flaws, the monsters within.
fantasy young adult review retelling YA lit Disney Hyperion YA Books E K Johnston a thousand nights 1001 nights middle eastern
Like Reblog Comment
show activity (+) A tale of two halves. An excellent, attention-grabbing opening which gradually deteriorates into an uninteresting and contrived mess made for skimming. Check out the latest entry in my local activities blog, MSP Adventure Time, in which I visit one of the best deals for used books in the Twin Cities, the Hennepin County Library branch booksales! I checked out the Westonka book sale and was pretty lucky this year, so I decided to share a few of my favorite discoveries! All this for only $12. Quite a deal... good thing it's only twice a year.

Packing for Mars, Our Band Could Be Your Life, and Aya were all on my reading list, so it was great to snatch the up for fifty cents a piece! 1001 Albums was a great buy as well, as it is chalk full of info, and I'm always trying to increase my inadequate music knowledge, It is pretty cool to pay just a dollar for such a hefty tome, the only problem is that it threatened to rip a hole in book bag.

I got some great nostalgic value from a pile of Far Side collections in great condition, material I haven't looked at in a decade. I have been reading a lot of Margaret Atwood lately, and I have heard that the Blind Assassin may be the best of her work, so I grabbed this heavy text as well.

I have been looking out for more Scandinavian literature as well, so Scandinavian Ghost Stories and Isak Dinesen's Out of Africa were great finds as well. Finally, John Dillenger Slept Here, which I mentioned in my blog on my favorite books featuring the Twin Cities was one that was missing from my library previously, so i was a hole I was very glad to fill.

There are HCL booksales this weekend at the Edina, Southdale, Brooklyn Park, Golden Valley, and Hosmer branches this weekend, so I am itching to continue my excavations in the near future!