Log in with Facebook
or
Wrong email address or username
Sign up
Already on BookLikes? Log in!
Incorrect verification code
Please, check your email, the code to access your BookLikes blog was sent to you already.
Enter code:
« Back Send
back to top
Search tags: 16-tasks-3

Keep Up With These Crucial SEO Tasks

Making sense of something as complex as SEO and its importance for your website is best explained with an analogy–your website is like a garden and the SEO tasks are the maintenance. For increased website traffic and better conversion rates, you must maintain it with specific SEO tasks. As industry changes and businesses adapt, content needs to be updated to maintain its relevance. Fast loading websites are extremely important for maintaining a high-ranking website that provides an exceptional user experience. Websites require frequent updates. To achieve your objectives, you need to employ the SEO experts of an SEO company in Clearwater, FL. 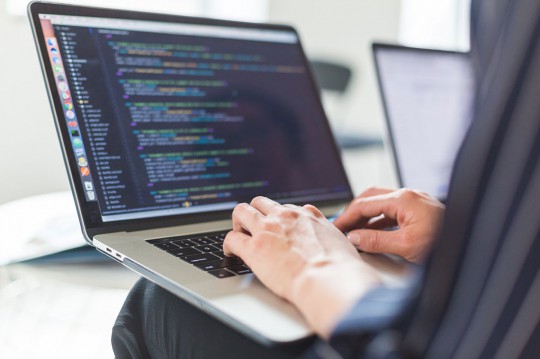 Every website development project will have its own unique challenges and peculiarities. The user experience should be a top factor for website development. Website navigation maps should be exactly the same for every page. Make absolutely certain that the website’s code is simple and clear. Making the web site mobile-friendly should be a part of the web development task list. One of the most important web development tasks is ensuring website security. Reach out to expert Web Developers in Denver, CO who can help get your website on the map. 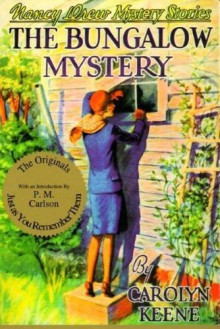 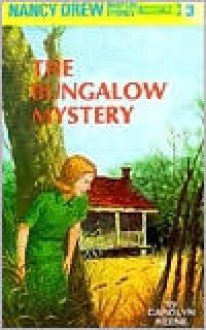 Reading the 1930 & 1959 versions of The Hidden Staircase simultaneously, comparing differences in the story and characters, and pondering dated plot points. Spoilers: full plot description below!

The changing artwork is part of my fun in collecting these books. Although there are two text versions, the illustrations were updated three times, with the quality deteriorating each time.

Russell Tandy did the first two versions, but the second revision, to save costs on the printing, only included a single frontispiece in a plain paper rather than glossy page, and for this book was an entirely new scene. The book in my collection with this illustration was printed about 1952, but based on Nancy’s hair and clothes, I’m guessing that this illustration was done in the 40’s. Here are an example of the original and revised Tandy illustrations, the first showing Nancy breaking into Jacob’s house, and the second showing Nancy and the rescued Jacob finding his house ransacked and empty: 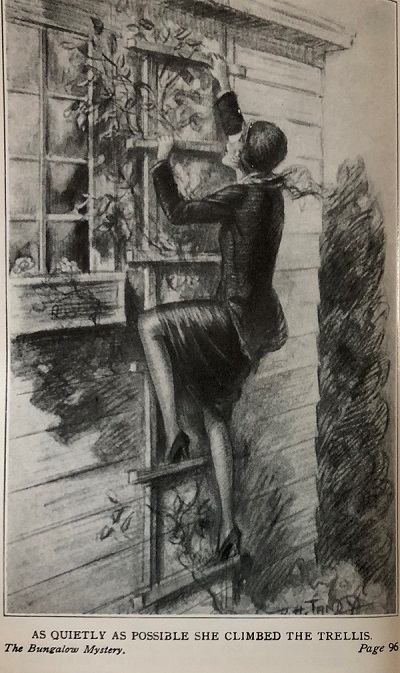 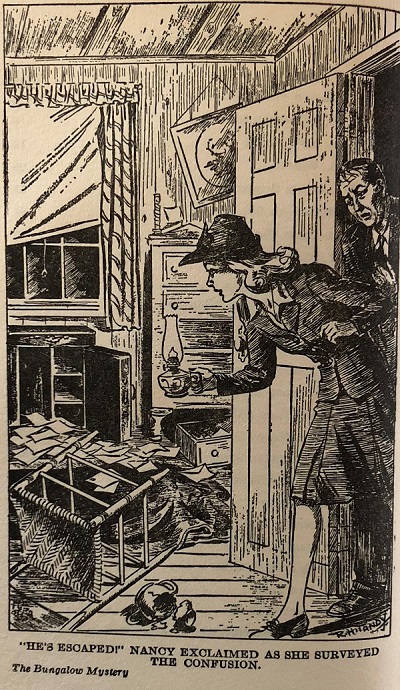 The illustrations were revised again for the 1959 revised text, but this time by an uncredited artist who had little of Tandy’s talent, and by the 1970’s (for the later volumes in the series) the illustrations look like they were pulled from a reject pile of scribblings. The revised versions all have 6 plain paper line drawings. These revised text illustrations don’t attempt to mirror Tandy’s original work, although they sometimes show a similar scene. 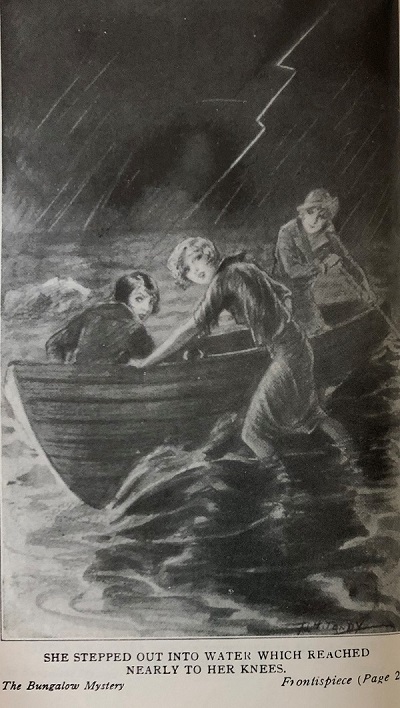 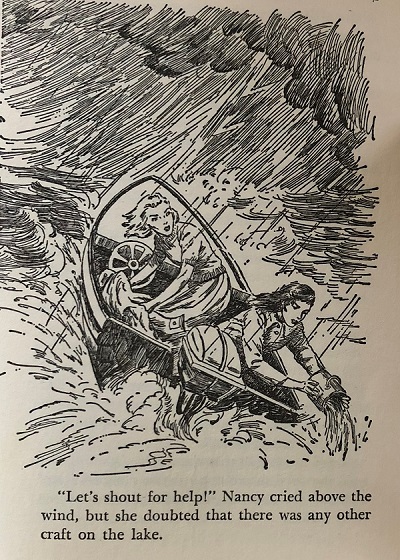 The tree blocking the road: 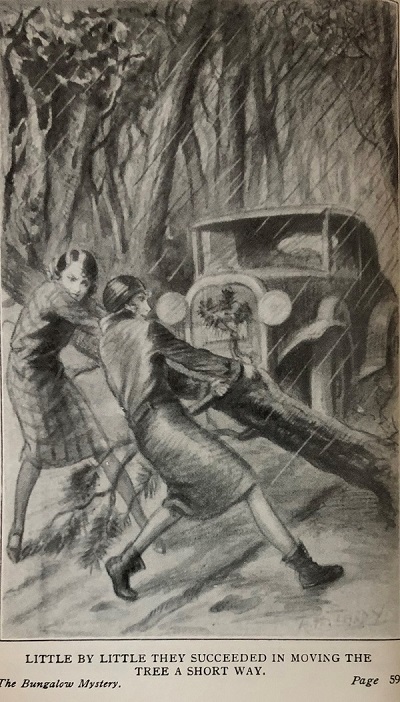 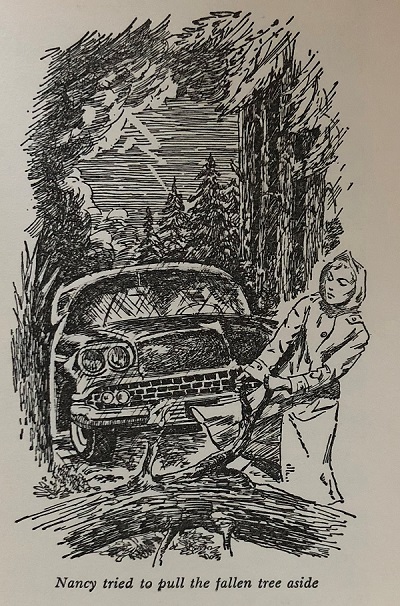 And last, here’s an illustration of my favorite scene in the original, that never would have made it into the revision, where Nancy parks illegally, rushes into a hotel lobby, snatches the phone from the desk clerk, then proceeds to give him orders to start making phone calls for her. 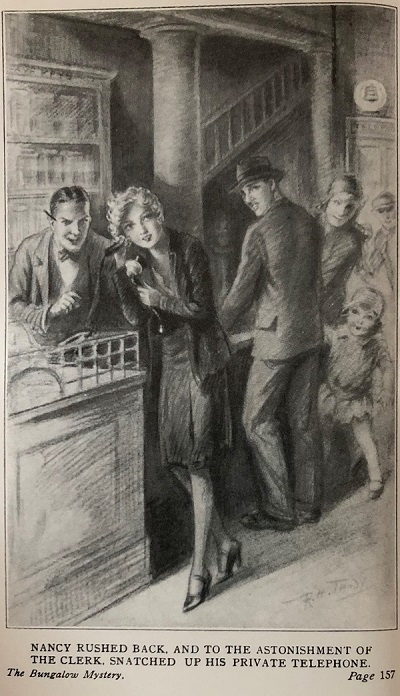 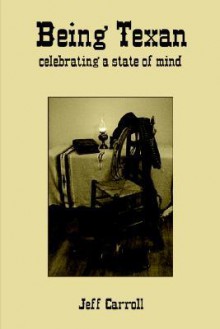 Since my father passed away a couple of years ago, I've been slowly reading through all my books that connect us, as a way of remembering him. He took me with him to pick up this book at an author signing. He became a fan after auditing Carroll's Texas History course at Blinn Jr College. I remember him telling me how, as the only old fart in a class full of teenagers, he probably got much more out of it than the kids that were simply getting their required credits out of the way. Knowing my dad, he probably stayed after every class, BSing with the professor and probably making him late for supper on the regular. My dad did love to tell tales, and he had a passion for local and family history. 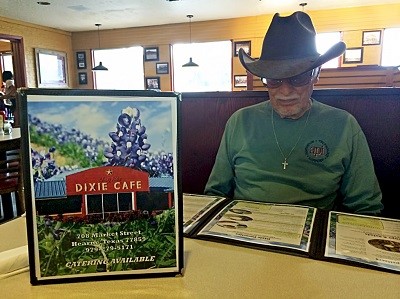 About the book: This book is intended to be used as supplemental reading for middle school Texas History classes, and it does it very well, given the constraints. It uses simple language in a direct, storytelling style, meant to both entertain and to reinforce historical facts. The scope is broad enough to satisfy diversity requirements and the prose carefully dances around the kind of scientific and historical facts that tend to annoy the bible thumpers, nationalists, and alt-righters that populate the state textbook selection committee and various schoolboards. I do wish he'd cited his sources for historical fact, or at least provided a reference list at the back, in addition to the facilitator's guide. 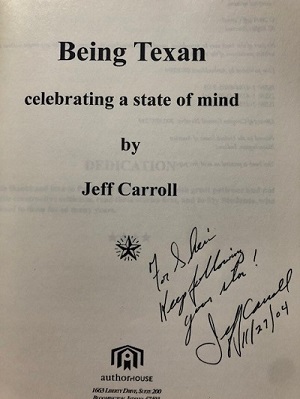 The last post on the 2019's edition of the game from me, I swear LOL. I apologize for taking so long, January was a mess.

Thanks to TA, MbD, and MR for allowing me to play hostess. As part of our duties, we were to pick a charity. I don't know if the other hostesses have chosen their charities, but I decided to choose mine today and make the donation..before I forget to do. So on behalf of the BookLikes.com community of readers, I made a US $50.00 donation to...

A grassroots organization of children’s book lovers that advocates essential changes in the publishing industry to produce and promote literature that reflects and honors the lives of all young people.

I picked this organization because I wanted to a charity that works with children's literature, as I have two elementary school kids who needed professional help (other than their main teachers) in learning to read. Also, in light of the upholding white supremacy going on in the world generally and publishing in particular (hi RWA! hi Flat Iron! hi B&N classics!), I wanted to support an organization that works to bring literature to every child by marginalized authors.

The charity uses a PayPal service to process donations, so although it is my name and email on the donation, in the notes field I dedicated the donation to the BookLikes.com community of readers in honor of our 24 Festive Tasks challenge. That might not mean anything to the person at WNDB, but I wanted this community/players to be acknowledged. You all were amazing and I enjoyed both hosting and reading all the posts you wrote.