Log in with Facebook
or
Wrong email address or username
Sign up
Already on BookLikes? Log in!
Incorrect verification code
Please, check your email, the code to access your BookLikes blog was sent to you already.
Enter code:
« Back Send
back to top
Search tags: A-Poisoned-Season 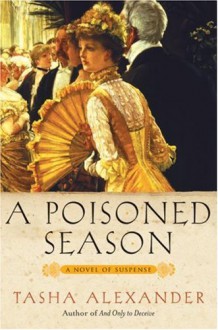 Mr Charles Berry is being feted in London as the pretender to the French Throne, a direct descendent of Louis XIV and Marie Antoinette. At the same time heirlooms of the ill-fated queen are going missing in houses around town, a cat burglar is at large and they have forged a connection with Lady Emily Ashton, who is also been plagued by malicious gossip.  In order to ease her way away from the gossip she has to investigate who is behind it, but it's all very complicated.

I enjoyed it, I like Lady Emily and how she approaches life. The complicated cat burglar was fun and how he played with her was interesting, if a chunk stalkery, but I love how Colin regards Emily as competent and smart and capable, feh and grrr to gossip mongers!

This book was...OK...I guess. It's not that I didn't enjoy it. Emily was as great a character as in the first book and the mystery was actually better. However I had trouble with two of the the sub-plots. At first we have the Emily has a stalker-subplot. And it is a stalker, not just a secret admirer who sends flowers now and then. He breaks into her house to leaver her "presents" and he sends angry notes and wilted flowers after he saw her with another man. Neither Emily nor the book itself treat that subject with the seriousness it deserves. That whole plotline and the resolution just didn't sit right with me.

Another one was just plain stupid. Ivy, one of Emily's closest friends is newly married but doesn't get pregnant. Not for any medical reasons but because Robert, her husband, never sleeps with her. He always comes home late and if Ivy is still awake by then he suggests she should take sleeping-powders because staying up so late must be bad for her health. Still he also joins the chorus of people nagging Ivy about when she will have an heir. I am not sure how Robert thinks babies are made. The resolution to that subplot also seemed far to rushed, as if a few pages before the end the author suddenly remembered that she also needed to do something about it. I have no clue what that I was supposed to think about that part. Was it a comic relief plot? It wasn't funny. Was it a commentary on Victorian sex-morals? If yes what was the author trying to say with it? Because apart from 'men are stupid' I didn't get anything out of it.

After so much complaining I feel that I have to point out again that overall I enjoyed the book. As said, the mystery was better than in the first book and not as easy to see through.
Emily's character-development also continues to be interesting. She is still trying to figure out how far she is willing to go and what consequences of her actions she is willing to accept. In that aspect the series is one of the most realistic historical mysteries I know. The research that has been done for the book and the attention to detail is also amazing. But all that can't hide that I wasn't that overwhelmed by some parts of the book.

And it's about Marie Antoinette's necklace...well at least it got mentioned and I wouldn't be surprised if it will play a bigger role.

And unrelated to Marie Antoinette: I am rather fond of Emily being fond of Greek art. (Cozy)-MCs often have pretty common hobbies or you get whole cozy-subgenres dedicated to certain hobbies: crochet, baking, candle-making etc. that usually  are especially aimed at readers who share that hobby (and often even have recipes, patterns and so on as extra). The way most of these are marketed does not make me want to pick up one about a hobby I don't share because quilting/gardening/[insert almost anything] seems to be such a huge part of them. (Also: the few knitting and baking mysteries I read were mostly crap but that's another issue).

Now: I don't care that much about Greek art. I was fascinated by Ancient Greece when I was younger and some of that stuck but mostly it's resting. I'm also not really a art-person in general. I mean I enjoy looking at nice pictures/sculptures occasionally but I'm not a frequent museum-visitor.

But: in these books it doesn't matter. Emily's love for the subject is an important part of the books and helps making her character more three-dimensional but it's not done in so much detail that it bores me or distracts from the actual plot.

I want more hero(ines) with more exotic hobbies. I actually learn some cool stuff with them.

On a side-note: I'm still alive (as proven by this entry), but I just moved and still have a really crappy internet-connection there which makes browsing most sites a chore. Basically I check my emails and am on Twitter but nothing more. I hope that will finally be resolved in the next few days.

I thoroughly enjoyed this second outing of Lady Emily; I was sucked back into her society from the first page.  No more guilt-ridden, moony angst!  But it was not without its issues and shortcomings.

A Poisoned Season picks up where the last book And Only to Deceive leaves off - Emily has returned from Greece in time for the London Season but still chafes against the rules set out for polite society.    There's a pretender to the French throne in town, a cat burglar, and a murder - all contributing to the enlivenment of the season.  In an attempt to help out her American friend Margaret, she unwittingly makes herself the focus of scandalous rumours concerning an illicit affair between herself and the Duke of Bainbridge.  Colin is trying to stop a coup d'etat.  Her best friend Ivy is having marital problems, and let's not forget the wager between Lady Emily and Colin...

I think the author tried to weave too many threads into the story.  Bainbridge is so prominent as to be considered a main character in the first half of the book - then he all but disappears without so much as a line of dialogue between himself and Emily.  Perhaps we'll see him again in a future book, but the reader isn't given any indication of that.  Also, there's a growing animosity towards Lady Emily on the part of Robert's boss, culminating with a nasty scene at Ivy's ball - but it's never explained.  What was up with that?!?

Mostly, though, I just enjoyed the story and the mystery(ies).  The murder mystery was exceptionally well done.  I was totally bamboozled; talk about Machiavellian planning.  The secondary mysteries were entertaining, but not overly impressive; the identity of one of the characters was evident from the first clue.

If I found Colin less than swoon-worthy in the first book, I was a true convert by the end of this one.  He's my idea of a romantic hero: confident enough of his own identity to be completely at ease with a strong, independent female.  His gift at the end of the book was inspired for both it's real value and its metaphorical one.  If I didn't like Lady Emily, he alone might be reason enough for me to keep reading.

One of my favorite paintings, “Marie Antoinette with the Rose,” by Louise-Elisabeth Vigée-Lebrun (female prodigy and a favorite of the queen). The rose is the symbolic flower of Austria.

★★★★ ½ Oh, I think I liked this one even more than the first in the Lady Emily Mysteries. It has plenty of intrigue, witty dialogue, and plot twists. There is a cat burglar stealing mementos of Marie Antoinette; there is a man claiming to be her heir; there is a ‘overzealous suitor’ stalking Lady Emily; and there is a murderer on the loose. Could it all be the same person?

I got a little excited doing the Discussion Questions (DQs) for my “buddy read” of A Poisoned Season, as you can see by my rambling inquiry below:

DQ#8.Lady Emily’s home is broken into twice. Was it the same person each time? Or was one home invasion by the Marie Antoinette Belongings Thief and the other by Lady Emily’s ‘overzealous suitor’? Are either of them Mr. Berry? Cécile doesn’t think he has it in him to be the thief? Could he be? If there were two different people that snuck in Lady Emily’s home, are they in league with one another? Is it a forgone conclusion that the person leaving the notes in Greek is the same one who left the rose and the note in her bed? Could two people be leaving her Greek notes? I hope this isn’t a dumb question, but are they love notes? Or something else altogether?

See what I mean? Poor Sandy, my “buddy read” partner. Her response?