Log in with Facebook
or
Wrong email address or username
Sign up
Already on BookLikes? Log in!
Incorrect verification code
Please, check your email, the code to access your BookLikes blog was sent to you already.
Enter code:
« Back Send
back to top
Search tags: Agincourt

Today I completed the second and final installment of the FutureLearn Agincourt course. The first class covered Henry V's preparation for battle and transporting his vast entourage across the Channel. This one described the actions of the English forces once they arrived in France.

Anne Curry, who has published several books that cover different aspects of the Hundred Years War, was the lead instructor for this course. This week she described the movement of the troops near Agincourt, discussing myth, reality, and details that can never be known for sure.

The use of gunpowder in the 15th century was discussed, as well as the forging of medieval guns and when and where they were used. We don't hear much about guns, more like cannons in this case, in wars of this era because their use was limited to sieges where it made sense to bring in the unwieldy weapons. They were not used on the battlefield.

The English effectively used these siege weapons at the Harfleur in Henry's first victory of the campaign. From there they followed an indirect route that would take them to their own territory at Calais. After a lengthy detour at the River Somme to avoid French resistance, the English faced a large French force near Agincourt.

Curry described the battle movements with interactive maps that enable one to envision the action. She points out issues that historians are not able to solve for, a major one being doubts regarding the exact location of the battlefield.

Many factors are attributed with credit for Henry's victory at Agincourt. Of course, there is the famous English longbow & mud, but there is also the French troops lack of organization, pay, and leadership on the field. Englishmen were fighting for their monarch, the French troops may have been on home ground but their king was not present.

After the victory, many French prisoners were executed, a move that was not unprecedented in medieval warfare but seems unnecessarily harsh to modern readers. He followed this up with a triumphant entry into London, specially designed to give the veneer of glory to a campaign that had fizzled out early despite the Agincourt victory.

And that is that. Anyone who would like to learn more was unsurprisingly directed toward Curry's books and several other resources.

I have done little besides enjoy FutureLean courses this week, but now I am all caught up. The first week of Agincourt was interesting and largely based upon the work of the main instructor, Anne Curry.

This course started with a detailed timeline of the Hundred Years War (1337-1453), which may have bored those who have already studied this era, but I thought it was a good way to set the foundation for this event. Tracing relations with France back to the intermingling of nobles when William the Conqueror invaded England, the causes of Henry V's eventual invasion were clarified.

After this overview, more detailed information was covered such as how to raise a medieval army, how much soldiers were paid, what weaponry and armour they wore, and how this was all transported across the channel. Each of these topics is covered rather lightly but with additional resources recommended for in depth research if desired.

I most enjoyed the discussion of the Southampton Plot between the Earl of Cambridge, Henry Scrope (which I learned is pronounced 'scroop'), Thomas Grey, and Edmund Mortimer, the Earl of March who had a greater claim to the throne than his cousin, Henry V. I did not have much previous knowledge of this, but see great novel potential in the personalities and motivations between these four.

Another interesting resource shared: MedievalSoldier.org where you can search a database of medieval muster rolls. First of all, Troy have you seen this book on Agincourt by Curry?   Saw it, thought of you, thought you might be interested since you've mentioned Agincourt a couple of times.

Secondly, Quirk sent me Pop Sonnets, which, yay!   I'm so glad.   Can't wait to get to this. After this batch of comics, and as I mentioned in a comment elsewhere, I have work-ish research to do first. I found the idea of writing a book centered around the events of the Battle of Agincourt to be a good one, but I just think it wasn't a particularly strongly written story. I felt little to no sympathy for the characters and the plot was rather confusing at times. If Cornwell is supposed to be the king of historical fiction I wonder if there's some pauper out there who should hold the title. Description: Young Nicholas Hook is dogged by a cursed past—haunted by what he has failed to do and banished for what he has done. A wanted man in England, he is driven to fight as a mercenary archer in France, where he finds two things he can love: his instincts as a fighting man, and a girl in trouble. Together they survive the notorious massacre at Soissons, an event that shocks all Christendom. With no options left, Hook heads home to England, where his capture means certain death. Instead he is discovered by the young King of England—Henry V himself—and by royal command he takes up the longbow again and dons the cross of Saint George. Hook returns to France as part of the superb army Henry leads in his quest to claim the French crown. But after the English campaign suffers devastating early losses, it becomes clear that Hook and his fellow archers are their king's last resort in a desperate fight against an enemy more daunting than they could ever have imagined.

One of the most dramatic victories in British history, the battle of Agincourt—immortalized by Shakespeare in Henry V—pitted undermanned and overwhelmed English forces against a French army determined to keep their crown out of Henry's hands. Here Bernard Cornwell resurrects the legend of the battle and the "band of brothers" who fought it on October 25, 1415. An epic of redemption, Agincourt follows a commoner, a king, and a nation's entire army on an improbable mission to test the will of God and reclaim what is rightfully theirs. From the disasters at the siege of Harfleur to the horrors of the field of Agincourt, this exhilarating story of survival and slaughter is at once a brilliant work of history and a triumph of imagination—Bernard Cornwell at his best. 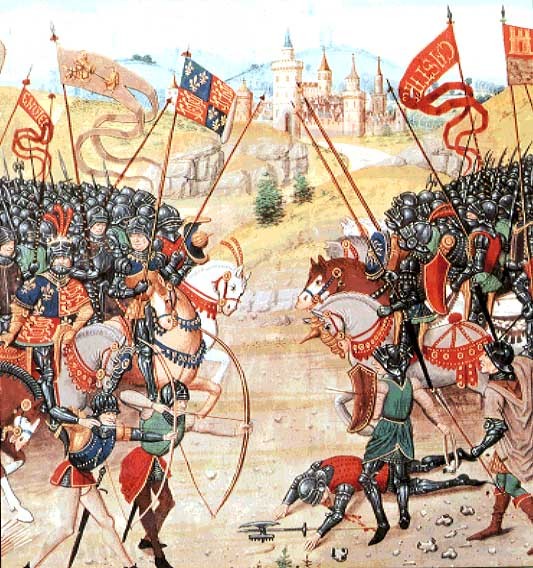 Info from wiki - The Battle of Agincourt was an English victory against a much larger French army in the Hundred Years' War. The battle occurred on Friday 25 October 1415 (Saint Crispin's Day), in northern France.

Not so sure that the use of names usually thought of as Robin Hood's men works here for readers as it annoyed me intensely; my brain kept alternating time zones because of these names. No doubt it is supposed to conjure up the 'band of brothers' theme but like I say, it was as annoying.