Log in with Facebook
or
Wrong email address or username
Sign up
Already on BookLikes? Log in!
Incorrect verification code
Please, check your email, the code to access your BookLikes blog was sent to you already.
Enter code:
« Back Send
back to top
Search tags: Archetype-Doctor 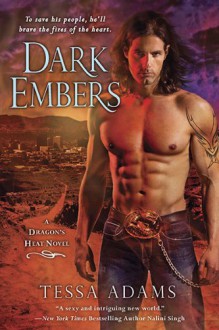 Dylan MacLeod is the leader of a clan of dragon shifters. Due to a mysterious disease, members of his clan have been dying. Desperate to save his people, Dylan decides to seek out human aid. His quest leads him to Dr. Phoebe Quillum, who is a researcher looking for a cure to Lupus.

Phoebe is on a tight time constraint to finish her research because the department pulled her budget. While in the middle of searching for additional funding, Phoebe is approached by Dylan. He's willing to pay her 3 million dollars to search for a cure to the disease killing his people. At first Phoebe is hesitant, but the exciting combination of researching a new disease and having enough money afterwards to continue her Lupus research is too much temptation to resist. So, she agrees to Dylan's terms.

Dark Embers was a really difficult book for me to get into. While the main story was interesting, the relationship between Dylan and Phoebe was boring. Those two just didn't have much personality and their background stories were hinted at, but never fleshed out. This made Dylan's reluctance at wanting to keep Phoebe frustrating. Especially, when there was nothing given to show why he was so hesitant. For her part, Phoebe was a fairly interesting character. She was smart with her actions and didn’t let people push her around. However, I didn't appreciate her being punished for having a cool head in dangerous situations. In fact, the climax of the story just pissed me off. Phoebe rationally handles a difficult situation and the characters (Dylan in particular) take it as a huge betrayal. Due to the "betrayal" Dylan punishes Phoebe by throwing a huge man-child tantrum.

This brings me to my biggest problem with the book. The last sex scene is basically a rape scene. Read the following for an explanation of the scene.

Dylan is furious at Phoebe for not telling him of her speculations that another clan was the one killing off his dragons. Her reason for not saying anything is because she first wanted proof before saying anything that might begin a war and put lives at risk. Smart, right? Instead of seeing this as a mature and level-headed thing to do, Dylan flips out. He forcibly drags her to another room, hurting her in the process. Then, upon returning later that night, he finds Phoebe asleep and decides to have sex with her. At first Phoebe is with him, but then she changes her mind because his mood is too violent for her. That’s when this happens,

“For the first time, pain pierced the haze of pleasure that surrounded her, and again Phoebe struggled to get away. But he held her to him, careful not to hurt her despite his violent emotions and the heavy thrusts that brought him fully inside her…. The need to orgasm rose again, sharp, and insistent, and she tried to fight it. She didn’t want it—not like this. Not when Dylan was so angry with her…. But he didn’t give her a choice, and eventually her body betrayed her…. When it was over, he pulled out almost instantly and rolled away from her with a groan. He was asleep within moments, but she spent the rest of the night staring at the ceiling, tears leaking slowly down her face for all that they had found and lost” (271)

Then, to really drive it home,

“When she finally climbed out of bed the next morning, Phoebe was stiff, uncoordinated. Her body felt used, and not in a good way. She turned on the shower and then stared at herself in the mirror—at the marks Dylan had made on her last night, with his passion and his rage. There was a large bruise on her right shoulder from where he’d bitten her, a scratch on her right hip… Bruises ringed her wrists from where he’d kept her hands pinned against the bed…. She closed her eyes, barely able to look at the destruction- of her body and their relationship.” (272)

And one more disturbing quote about Phoebe’s emotions afterwards,

“…last night hadn’t been about desire or need or love or even hate. It had been about rage, about a fury so deep the only way he could express it was physically.” (272)

This scene completely killed the book for me. The number one thing that I cannot stand in books is rape scenes written under the guise of angry sex. What really infuriates me is that after this, the scene is never brought up again. It happens, the story moves on. What was the point? Dylan's character was just decimated and we're supposed to shrug and move on? I don’t give a flying crap if Dylan later saves Phoebe. I don’t care if he later saves the entire world. It doesn't make up for his abhorrent actions or magically redeem his character. And what about that reaction Phoebe had in the aftermath of that scene? Did she just randomly get over those feelings we saw her expressing about what Dylan just did? She said he had just destroyed their relationship but NOTHING came from it. Honestly, if I hadn’t almost been done with this book, I would’ve put it down after that scene. But since there were about 50 pages left, I chugged on and just ended the book pissed off.

A lot of people have enjoyed Dark Embers book. I can see why, Adams has a smooth writing style and her plot is fairly well fleshed out. But that last 25 percent of the book just killed it for me. 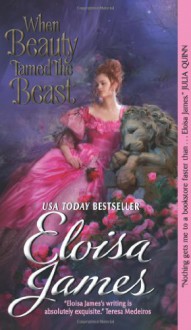 The hero in When Beauty Tamed the Beast is based off of the character Gregory House, from the TV show House M.D. This made me unsure about picking up the book. While I love House, I was afraid this would read like really awful fanfiction. Luckily, that wasn't the case. When Beauty Tamed the Beast is very light and humorous with engaging characters. There are also a few homages to the TV show casually thrown in (such as the mention of a patient with the last name Cuddy) but they weren't annoying.

The thing that really made this book enjoyable was the amount of time the two main characters spend together. It was a nice change of pace from other historical romances where the main characters are forced into a marriage and then spend half the book trying to avoid one another. Instead, Linnet and Piers get to know each other over the course of the story. So, you slowly start to see why they would be drawn together.

Also, the way Piers didn't have a sense of personal space was pretty amusing. The morning scenes when he'd come to wake Linnet up to go swimming where probably my favorite parts.

I don't think I'll read any more of the books from this series, but I would recommend fans of Historical Romance give this one a try. 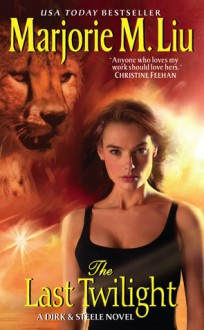 The Last Twilight was an action packed thriller that had me sitting at the edge of my seat several times.

Rikki is a virus hunter doing work in the Congo, who unknowingly becomes the target of two different men needing her expertise. Both want her alive and are willing to go to extreme measures to ensure that she's taken captive.

Rikki was a pretty kick ass character. She's emotionally and psychically scarred which has caused her to take a rather jaded outlook on life, but despite her pragmatic approach to things, you can tell she's a compassionate person. Also, despite being the only human in a cast of supernaturals, Rikki is highly resourceful and can hold her own when things start to get dangerous. I always adore the heroines in Liu's books, because they're always well rounded characters who can kick a little butt.

Because of the threat to Rikki, her boss has hired Dirke & Steele to protect her. Amiri, a cheetah shifter, and Eddie, a guy who can light things on fire with his mind, are dispatched for the job. Amiri and Rikki both have some interesting pasts and as they get to know each other, you can see exactly why a connection between them forms. They know how to relate to the other and it's wonderful to see a relationship in a romance where you completely understand why the two characters are drawn to each other.

One of the other things that made this story so compelling for me was the Congo setting. The majority of the action is our heroes running for their lives through the jungle from two different pursuers. The atmosphere of the Congo really added to the suspense, because they were isolated with no way of contacting anyone who might be able to help. The jungle also added a level of creepiness in the "forest has eyes" kind of way. I just loved it.

My only regret is that I haven't read the series in order. I was all over the place with these books, reading the ones that sounded the most interesting to me first. So, while the Dirke & Steel series can be read as stand-alones, I would recommend reading them in order because there's a story arc that runs through the whole series. Unfortunately, some of the nuances of that arc were lost on me because of the way I've been reading the books. 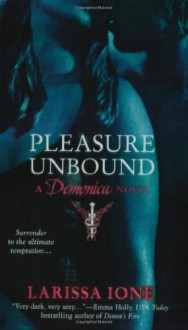 Pleasure Unbound really took me by surprise. This one had been sitting on my "to be read" pile for months and I've just been ignoring it because honestly I couldn't remember why I had picked it up. But I was pleasantly shocked at how fun of a ride this story ended-up being.

Eidolon, an incubus, runs a demon hospital where the motto is: they have to treat everything that walks through the doors in need of assistance. Even baby munching demons and members of an organization that indiscriminately kill demons. Eidolon starts kicking himself for making that motto when Tayla, a member of one of those organizations, comes in with some bad injuries. Not only does he have to fix her up but he also has to keep his staff from killing and torturing her.

Ione does incubus demons right. Eidolon was fantastic and I enjoyed how steamy the read was. The only thing that got a little annoying for me in the story was Tayla's determination to hold onto her prejudices surrounding demons. Even after her organization tried blowing her up, she was still desperately clinging to her belief that they were the good guys. But the reason behind Tayla's stubbornness was explained really well and saved her character from becoming too obnoxious.

If you're looking for a fun, fast paced paranormal romance I would recommend this book.