Log in with Facebook
or
Wrong email address or username
Sign up
Already on BookLikes? Log in!
Incorrect verification code
Please, check your email, the code to access your BookLikes blog was sent to you already.
Enter code:
« Back Send
back to top
Search tags: Carrie-Butler 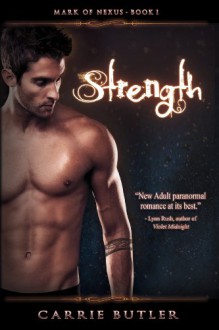 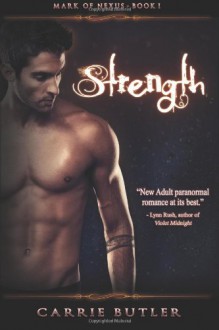 When college student Rena Collins finds herself nose-to-chest with the campus outcast, she's stunned. Wallace Blake is everything she's ever wanted in a man--except he can't touch her. His uncontrollable strength, a so-called gift from his bloodline, makes every interaction dangerous. And with a secret, supernatural war brewing among his kind, there's no time to work it out. To keep Wallace in her life, Rena will have to risk a whole lot more than her heart.

I'm sure that young adults/teenagers would loved this book.  I had a difficult time finishing this. I found it lack luster. For all the drama I still came away confused and unimpressed.

This is a very intriguing New Adult read. It can be iffy for me with this genre, I generally get annoyed at the immaturity of the characters. These characters are not so bad. They were surprisingly mature most of the time.

Rena is sassy and fun, I liked her snarky attitude. She does have a couple dumb girl moments and not so great taste in friends, but generally she is very like-able. Wallace is a great match for her, he is a bit more churchy than I like, but it is not heavy handed. He does have major angst going on, but it is warranted.

The story is very involved, there are a lot of things going on and plenty of detail. Almost too much day to day detail, the story tends to drag. A quarter of the way in I was wondering where it was headed. It just felt so long. The end is action packed, but it could have used a bit more conflict mixed throughout.

The book pretty much all comes from Rena's POV, which limits what you get to know and understand as a reader. It would have been great to have other characters in on the narrative. It would have helped to understand all the supernatural aspects and given insights into feelings.

The romance is quick, new adult has the same dramatic insta love connection as YA reads. They meet and within a week they know they are soulmates. Okay, I can accent things are sped up because of the supernatural elements. Really, they seem to have a very sweet connection and I hope to see it grow through the series. There are some hot kisses and some very heavy petting, but nothing beyond that in the steam department.

I listened to the audiobook narrated by Nellie Barnett, she adds sass to the read. She has a really great pace that keeps the story moving. Her voices were great, the guys sound really similar but other than that they are terrific. She is very well matched to the read.

Overall, I enjoyed the book and am curious about the series. I really want to know where it is all headed. I will wait for the audiobooks to release, because this is a series I would rather listen to than read. The series shows promise and kept me entertained while I worked.

Disclosure - I received a copy of this book in exchange for an honest review. All thoughts, opinions and ratings are my own.
Like Reblog Comment 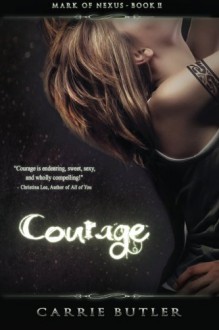 Immediately following the first book, I wasn’t no time  going to Amazon and purchasing the second. After that ending, I was hooked and wanted more.

Plot: So in this plot, things get much more difficult for Rena and Wallace. They are faced with lots of  obstacles and they really need each other if their going to beat it. This plot is also filled with so many emotions. Lots of shocks, happiness and above all heart ache. So many good things fall into their lap but not without it being a sacrifice.

Love: This part moved me so much. It hurt to read it. I mean, they are trying but many things came against them at one time that they could not see their future the way they did before. It was clouded with uncertainty and lies. Lies that in the end, destroyed a love all for power. Be assured that this love and plot contains many plot twists that you don’t want to put it down.

Ending: Once pieces of the puzzle starts to come together I began to realize that they is something bigger at play. I like how well things came together and how well the reader is pushed to such a dramatic ending. I can not wait to read the next book!!

This is a great sequel. I totally adored it and would read it again, despite the pain it cause me. I thoroughly enjoyed the emotions, the twists and turns , and not to mention all the drama that goes on. It’s non-stop entertainment that I could use more of. Sometimes life throws us unexpected circumstances. And the questions stands. Do you have courage to fight? If so, give this book a chance.

I enjoyed this book so much, that the moment I was done with it, I immediately went to Amazon and purchase the next book.

Plot: This plot really grabbed me. You have this guy who is isolated and strange. Everyone thinks he is a freak when really more is going on than what we see. I adore how the plot moved with the reader, pushing me along every bread crumb. Every chapter intrigued me more and only a quarter way through, I was ready to zoom through the book! There are plenty of plot twist and a evil struggle for power, so it kept me pretty entertained.

Love: I Love this LOVE!!! I like that this couple overcame a lot of trials. They went through social stigma, rumors and friends constantly on their case about their relationship. Yet, it blooms as at great pace starting with friendship to a love that I can bask in. Their day to day life is pretty normal except a few supernatural aspects going on...

Supernatural: I like that this is a small but big part of their life. I want to say exactly what it is but think of it this way. It's like a human but just a bit stronger. I like the back round history of where the powers come from. Anywhoo, its great! I totally read through this story super fast.

I love this story. I think it carries plenty of great elements without it being too much. Everything is balanced out well and of course has a great love interest that I could not get enough of it. An unexpected journey that I loved, Strength steps out from the pages, tantalizing the reader. The emotions are strong with supernatural elements that keep you at the edge of your seat. With the title living up to the story, do you have the strength to go on? Strength is a sharp start to an excellent series!