Log in with Facebook
or
Wrong email address or username
Sign up
Already on BookLikes? Log in!
Incorrect verification code
Please, check your email, the code to access your BookLikes blog was sent to you already.
Enter code:
« Back Send
back to top
Search tags: Catherine-Fisher Aimed at the Young Adult readership, this novel deals with time-travel, the mirror being the means to achieve this. Characters from the past, present and future inter-mingle and interact although it is difficult to know who to trust. There's also a fairy element added in, just to add to the engaging plot. The first part of a trilogy, I'm not sure that I'm interested enough to want to read what happens but, if you read this, be prepared to end on an inconclusive cliff-hanger. This sorry saga of a quartet comes to a rambling end and I just don't really care much. Fisher's total lack of planning lets her down completely in this disappointing waste of good ideas that also lacks some internal self-consistency. It should have been half as long (two volumes), taught and well thought out, but it is none of these things. Easily the worst time I've had with Fisher. 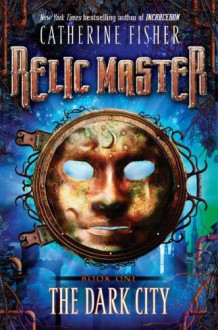 This review will be short because this book is so forgettable that the details are already slipping away. It wasn't terrible, but the writing didn't float my boat, the main characters (Raffi in particular) were almost devoid of personality, and the plot's been done before and so much better. I love the whole fantasy world rising after the fall of technology theme, but this particular version of it is just mediocre at best. I won't be bothering with the rest of the series. The third and penultimate volume of the Chronoptika saga - and here I use "saga" in it's most negative sense of long-winded dullness.

I re-read the preceding two volumes in order to remind myself what was going on, a procedure I usually adopt if I've waited a year or so for the latest installment of a series to appear. Generally this works out fine but in this case it served to highlight and re-enforce the problems that have been present from the outset; these are poor characterisation, too many protagonists and plot incoherence.

Tackling the latter-most first, I head off on an apparent name-dropping digression: I met Catherine Fisher, once, at a talk she gave about Incarceron. I was the only adult there who wasn't a host or a school kid... Still, she was kind enough to sign my vast stack of her books afterward and further discuss her writing. I was shocked to discover that she doesn't plan her novels at all. This seemed hardly thinkable to me; I couldn't see how I would be able to write a novel without some planning, considering that stories that enter my mind generally do so as a final scene followed by an initial scene, leaving me the problem of how to link the two up...

...which leads me back here, where Fisher's lack of planning seems all too believable. It feels like what really happened here is that she wrote a single text then divided it up into four more or less equal-sized volumes after the fact. She starts in Vol. 1 by introducing more and more protagonists and complications of plot with little idea of where it's all going and took the remaining three volumes to sort out the mess which, here at the end of Vol.3 is only just beginning to simplify or cohere at all. Random plot threads appear and resolve without really seeming to move the whole mess forward at all. The whole mess of shifting loyalties of the protagonists has mostly failed to intrigue me because...

...characterisation in this book seems to consist primarily of giving each character one flaw and one obsessive motivation. It isn't enough; I just don't sympathise with most of the characters.

At this point I'm inclined to read the final volume when it appears because I am intrigued by certain things that remain mysterious - primarily the relations between two characters that have remained Mysterious and how Fisher manages to untangle all the myriad plot threads and tie them up in a neat bow for an ending - if she can!

It's disappointing, because over-all I'm a Fisher fan but this series continues her recent trend of using unsympathetic characters that make it difficult to care about the story.

OK, here's the fundamental problem; I don't seem to care much about anybody.