Log in with Facebook
or
Wrong email address or username
Sign up
Already on BookLikes? Log in!
Incorrect verification code
Please, check your email, the code to access your BookLikes blog was sent to you already.
Enter code:
« Back Send
back to top
Search tags: Chinese-Zodiac I loved the first book of the series, can't wait to read this one!

Enter a secret guild of assassins…

As a member of the Lotus League, Natalie Quan is as lethal as she is invisible. Her newest mission brings her to Malaysia, and straight into the arms of the man she relinquished to her past. The only man who has ever seen through her outward façade to her soul. And the one who stands between her and her goal of hosting one of the twelve spirit animals of the Chinese Zodiac—the Snake. To keep the Snake and finally defeat the demon of her past, she’ll have to slip into one more disguise.

Some masks never hide the truth…

The last person Kassian Weld, Chosen of the Ox, expects to be named their newest member is Natalie. Years ago, she disappeared without a word. Now, she’s back with a sexy air of confidence, tempting him to end his pledge of celibacy. Despite her claims of being a capable assassin, no way in hell will Kassian allow Natalie to host the Snake—a volatile spirit. Yet, Natalie is as driven to succeed as Kassian is determined to ensure she fails.

The vows that brought them together threaten to tear them apart…

Natalie is bound to the Lotus League, Kassian is devoted to his oaths, and they are both sworn to their fates as Chosen. The forbidden spark of desire reigniting between them threatens to consume their destinies. But when Kassian unmasks Natalie’s darkest secret, they’ll risk every vow they’ve taken for one chance to seize passion together…by the horn. Fun fact: Authors Doris Lessing, Iris Murdoch, and Alice Munro were born in the year of the Goat. So were Toni Morrison and John le Carré.

It is said that the year of one’s birth sign can be unlucky. So, for those born in the Year of the Goat, 2015 might turn out to be a tough year. But don’t worry. Each Chinese Zodiac animal comes with its own set of lucky numbers, colors, directions, and months. Based on what is lucky for Goats, we have selected some books to read until the Year of the Monkey takes over in 2016.

Purple Hibiscus by Chimamanda Ngozi Adichie: Set in Nigeria, Purple Hibiscus by Chimamanda Ngozi Adichie is a novel about the life of a family in which the father rules with an iron fist in the name of religion. During the upheaval caused by a military coup, sister and brother Kambili and Jaja are sent away to live with relatives. After encountering a way of life different from their own, conflicts escalate when the family is reunited.

The Book of the Year in the Year of the Goat Amazing debut! I love paranormal/fantasy romances, well honestly I love all romances, but this is different from all the other books I've read. From the setting to their spirit animals, you will get lost in a world where the paranormal seems normal. I loved the relationship between the host and their spirit animal, as well as the way their animal's personalities and characteristics influence the hosts behavior. The chemistry between Sheng and Lucy is off the charts, and once they get together, you might need a fire extinguisher handy.

I cannot wait for the next book in the series!

eARC provided by the author in exchange for an honest review. The final volume! Curses have been broken and the eternal banquet has finally come to a close. But there are still some loose ends to be wrapped up. How will the members of the Zodiac deal with their newfound freedom? Can forgiveness come in the wake of Akito’s past actions and a new surprising revelation?

Ok, let me start by telling you that it took me forever to figure out who was on the cover of this. I was like, who the heck is that? About halfway through the volume I realized it’s Tohru’s mother. I never pictures her with red hair.

The Zodiac have gathered together for the meeting and mouths drop when Akito comes out in a woman’s kimono and a flower in her hair. We get the real story of Shigure’s “goodbye” present. By the way, there’s a lovely drawing of Shigure and Akito at the beginning of the chapter. I just love it! They’re kind of beautiful together. The Sohma housekeepers are not fond of the change in Akito. I have decided this is because they’re all bitches. They play this lame “this is how it’s always been” card, as if that kind of crap actually makes up for their heartlessness.

People are moving on with their lives. Yuki’s going away to college. He’s going to live on his own in an apartment. But don’t worry! Machi has a key and she can come over anytime. Kyo tells Tohru that he wants to go out and see the world and he wants her to come with him. Of course, she accepts. We also get a little glimpse into what was going through Kyoko’s mind as she died. Kyo misinterpreted her last words. Like, Tohru promised, they weren’t said in hatred.

Everyone talks about Tohru and prepares to go see her and Kyo off. It’s obvious how much she has touched their lives. Yuki decides she needs to know, so he tells her how they all care for her. He thanks her for the difference she made in his life, as well as the rest of the Sohmas’ lives. Finally, we’re left with a precious look into Kyo and Tohru’s future. Such a good series! 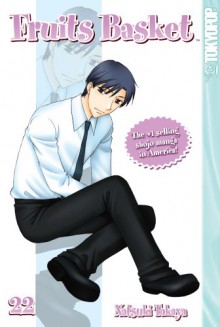 Kyo is standing up for himself! Yay! So, I’m not sure why exactly Kyo was puking in this volume, but I have a theory about it having to do with the curse breaking. This theory was never confirmed, but I’m sticking to it!

Arisa visits Kureno and cuteness ensues. Hanajima has been spending a lot of time with Shishou and it’s freaking Kyo out. What’s freaking me out are the age differences by some of the people in this series. I mean, Shishou isn’t young and Hanajimi hasn’t even graduated from high school yet. Is this just a culture difference in Japan? Do people care about ages there?

Akito calls all the Zodiac to the estate for a meeting. She’s releasing everyone and revealing the truth about herself. We see every Zodiac’s reaction as their curse is lifted. It’s emotional for all of them. Like I said before, they’re losing a part of them they’ve had their entire lives. The most emotional being Kyo’s since he only realizes it when he holds Tohru and doesn’t transform. They both burst into tears when he rips the beads from his wrist. We get to read the story of the Zodiac and God. The volume ends with Akito embracing Tohru. I’m so sad the series is ending!