Log in with Facebook
or
Wrong email address or username
Sign up
Already on BookLikes? Log in!
Incorrect verification code
Please, check your email, the code to access your BookLikes blog was sent to you already.
Enter code:
« Back Send
back to top
Search tags: Crazy-Love Caught up in rain clouds, Jackson and Shay stumble upon their rainbow. At the worst possible time. Love and heartache go hand in hand in this emotional roller coaster ride. This Crazy Love fights it's way through some serious drama to find the way into love. Heartbreak haunts her, danger stalks her and attraction fuels the fire. Jackson is no hero, but he wants to be her avenging angel. Croix knows how to break a heart. I left a piece my heart behind. Abigail and Drake make less than perfect look like so much fun. Crazy Imperfect Love tackles a serious subject with a light hearted twist. For Abigail her need for order is taking over her life. What better way is there to face your fears, than to shake up your routine? A change of direction takes her out of her comfort zone. A new city could be just the prescription for an adventure of the heart. Grayson adds spice and hint of sugar to stir up the heart.
first-reads
Like Reblog Comment
show activity (+) When I read the description of this, I really didn’t think I was going to like this book. It sounded like just another quirky romance killing Greek mythology. However, I liked Eliza right from the beginning. I soon found myself not being able to put the book down until I was done. I liked the brief chapters that were in Jake’s POV. I thought they were the perfect length and info. There was only a couple of things. when it was in Jake’s POV, it was first person but when it was Eliza, it was third  person. Also, it’s not explained up front what has to happen for the “cupids” to do their work. It makes it a little confusing as to why things that happen to her occur. It’s not until a pretty good chunk into the book when Eliza is trying to explain things to a potential client that I finally got it. I look forward to reading more from this author. 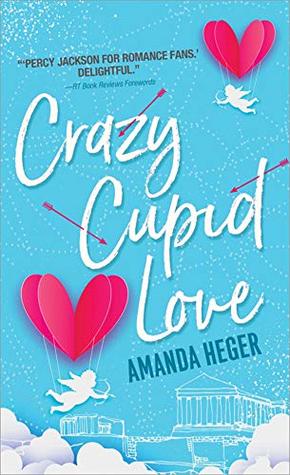 Let's Get Mythical #1, I was real excited to read this. With RT Books Review calling it "Percy Jackson for Romance Fans." I was expecting a slightly more Urban Fantasy-esk/Rom-Com rather than just a Rom-Com with Mythological tendencies. It was a nice read, the first half was a slow build up of the story, establishing characters, backstories, and setting up of the conflict. It also set up the romantic connection between Eliza and Jake.

Eliza and Jake have known eachother since they were kids but as soon as they hit puberty they became aware of each other in term of boy and girl. Eliza out of fear of rejection distanced herself from Jake and Jake not knowing what else to do let it happen. They went their separate ways until now. Eliza has always been a klutz, that wouldn't be a big deal if she wasn't a Descendant of Eros, as a cupid any minor injury she inflicts on someone causes a love charm. She gave up on being a good cupid early one especially when she failed spectacularly when trying to get her cupid license. But he father just had another major heart attack and her mother has been suspended and her brother has a conference he has to go to. That leaves Eliza to pick up the slack that means getting her provisional license and that means she needs a mentor that's where Jake comes in.

Jake has always loved Eliza, his time in the Cupid Corp gave him time away from him to get his head on straight but as soon as he got back it was like he never went away. If only she hadn't accidentally hit him with an enchantment now Eliza is confused that Jake is only acting this way because of it or if he really likes her. If falling in love with your mentor isn't troubling enough Eliza's enchantments start to backfire and pretty soon it's not just her license on the line it's her parents reputation and worse case scenario all of mythical-kind.

Overall, it had a much better finish than a start. Things started to pick up at the halfway point it has a really good climatic finish and a fun epilogue. I am curious about where she's going to go with the next book, she put in lots of fun mythological creatures to pick from. I want to thank Artsy Ally for pointing out a typo on page 15 in my new release East Van Saturday Night - Four Short Stories and a Novella (EVSN). It has since been corrected on all digital platforms and in paperback. Unfortunately, if you purchased the book in either form before September 28, 2018, you’ve got one with the error in it and maybe a few others that have yet to be discovered.

Artsy Ally, a.k.a. Ally Robertson, is content producer and social media director of Access Television, a non-profit organization that airs “community stories from Vancouver, BC, with a focus on marginalized voices. Produced by volunteers and neighbours.”

I reached out to her to see if she’d be interested in reviewing the above mentioned new release.

The response was interesting.

Robertson asked for a digital copy and said she would “hand it off to someone who may read and review it. If they decide to do a review, we will have you come into the studio for a short interview.”

That sounded encouraging, and I sent an e-pub version immediately. The following day I received her response.

She began by saying “Your stories have merit and I enjoyed the memories they stirred in me. I really enjoyed the chapters with Chris’s attempt at crossing Canada. ... I found East Van Saturday Night to be more like a one story novella with chapters, as the stories are of the same character.”

Robertson then proceeded to tell me she too was a self-published author “at the moment,” and she would “highly recommend you have people proofread your work before you publish. I am trying not to be highly critical, but as a former book publisher who published over 60 authors, I have some experienced suggestions for you. I found there were some issues with the book I just couldn’t overlook.”

Her suggestion was to have “a good proofreader go over it and you re-edit.”

I have an incredibly thick skin. I look at constructive criticism as a way to improve my writing. Accordingly, I sent the following response to Artsy.

No offence taken, in fact, thank you for your suggestions.

Scene changes can also be indicated by adding an additional blank line space, which I prefer over asterisks. However, I realize this style works better in print than in digital as the formatting may diminish it or eliminate the space altogether. I plan to take your suggestion and revise the manuscript inserting asterisks to indicate scene changes.

When errors are pointed out, I fix them and upload the corrected manuscript to all my digital and print publishing platforms. New readers will find one less mistake, though unfortunately, that doesn’t help those who have purchased my book with the typo.

When I write, I have two computer programs (Grammarly and ProWritingAid) filter the work. After a minimum of three revisions, I send the manuscript to three beta readers. Despite this rather thorough process errors are still overlooked.

Excuses and expenses aside, I will endeavour to do better.

Robertson replied saying I might be able to “find a student willing to do it (proofread) for $1.00 per page.” She was lucky enough to have her novel, Epic Crazy Love “go through 3 editors and a proofreader long before I re-published it myself.”

So now that you’ve got context let’s draw some conclusions.

More importantly, though, I’m interested in how well her novel is doing considering it went “through 3 editors and a proofreader” before it was self-published.

Epic Crazy Love was published in April 2017. Here’s the blurb accompanying the book.

To date, Epic Crazy Love has one, five-star review. Here are its rankings on Amazon.

“I did love the story (East Van Saturday Night) itself,” Robertson writes, “but reading it, it was difficult to overlook all of the little things that threw me off as a reader. Paying someone to proofread will really kick it up a notch and make your work great.”

But here’s the kicker, Artsy Ally, didn’t pass along my book to the reviewer saying, “Due to the adult content I don’t think it’s a good match for us to review for you, I don’t think it would be something Susan would enjoy reading so I won’t pass it along.” Stay calm. Be brave. Watch for the signs.