Log in with Facebook
or
Wrong email address or username
Sign up
Already on BookLikes? Log in!
Incorrect verification code
Please, check your email, the code to access your BookLikes blog was sent to you already.
Enter code:
« Back Send
back to top
Search tags: Daughter-of-Smoke-and-Bone I have come back to this series a second time (something I'm not known to do), looking to relive the majesty that was my first encounter with Laini Taylor. I listened on Audible instead of reading it this time around and I am SO glad I did because I love love LOVED it just as much as my initial read through, which is Ah-MAZING to me. The narrator was so incredible that I jumped to look her up to see what else she brought to life and a few have made their way onto my TBR because of her talent. This is most definitely one of my all time favorite series and categorically, hands down one of my all time favorite authors if not #1. Every word is suffused with passion and let me tell you... Mrs. Taylor is a master wordsmith! She will make you feel like you are captivated, entranced and 100% present in the moment. This is achieved with beautific writing, extremely complex and robust characters and majestic world building.

I ship Karou and Akiva so so very much that it hurt (at times) to hear how they would vascillate between "I love you, I can't live another second without you" and "I hate you, I wish I had let you die on that battlefield"...coming together and repelling like magnets... and just like magnets, they repel just as strongly and they unite. Another relationship I am COMPLETELY in love with is Karou + one of the absolute best secondary characters of all time... it is Karou's tiny yet mighty best friend Zuz. Zuzzana is an amazingly sassy, fiesty, loyal tiny tiger of a character. I would totally read any and all future books with her and her handsome, violin playing boyfriend in it!

This book is lyrical yet not pretentious. It is great at making you question just who are the bad guys? Who's at fault? Who started all of this and how will it end? Who will be victorious and at what cost? I can't gush enough about this series. Imho it is shear Perfection! If you are going to check this series out I wholeheartedly suggest that you go the audiobook route, the narrator gave it that little extra jun use qua. I could go on and on but I'll spare you the fangirling and just ask this... why are you still here? GO and immerse yourself...bask in the glory of Laini Taylor's unique mind!

Overall: if you haven't read any of her work then I suggest, with all of my heart, that you start here or with another of her masterpieces, Strange The Dreamer.. you'll thank me later, I promise. Wow, this book was absolutely amazing. It was one of the cutest books I read this year and I totally needed that. I loved the Daughter of Smoke and Bone trilogy and I am so happy to have had this additional story about Zuzana and Mik, it really added something to the story. Zuzana is the only “thing” that connects Karou to the real world and learning more about her was amazing.

Zuzana reminded me a lot of… myself. She is really short (like I’m) and hates the fact that people find her cute and want to pat her head because of it. There was this quote that will definitely be one of my favourite now:

“And I’ve found that since you can’t electrify yourself like a fence, the next best thing is to have murderer’s eyes.”

This is me all the time (my actual boyfriend was kind of scared of me when I was a teenager. I can’t help it, I don’t want to be called cute).

Anyway, I loved having both point of views and learning that Zuzana and Mik were already totally into each other without knowing it. What Zuzana does for him is incredibly brave and romantic.

Also, do I need to talk about the illustrations? These blew my mind! The book is absolutely beautiful, and although the story is amazing on its own, you definitely should buy the book just for those.

I had so much fun reading this and if you love the Daughter of Smoke and Bone trilogy, I recommend reading this!

Around the world, black hand prints are appearing on doorways, scorched there by winged strangers who have crept through a slit in the sky.

In a dark and dusty shop, a devil’s supply of human teeth grows dangerously low.

And in the tangled lanes of Prague, a young art student is about to be caught up in a brutal otherworldly war.

I’ve been seeing this book around all over the place and been meaning to read it for a while now. So I was happy to finally get to it. I must admit that whole I liked it a lot it was not as good as I thought it be until the last few chapters. The beginning for me was a bit slow and confusing and I had no idea what was going on for a while or where it was going. Even though we go through a couple timelines throughout the book it became less confusing the more I got into the book. The world and character building was absolutely beautiful. I really enjoyed the different worlds and times. I enjoyed the characters even more. I really liked one of our main character Karou, she sis strong can kick butt and of course fly (lol ) and has a funny side. I also really liked Zuzana and what she meant to Karou. I did have a little trouble connecting with Akiv in the beginning but it seemed to get a little better throughout the book and we get deeper into the story. I also think and sort of hope we will see more of Kaz. Overall, I really enjoyed this book and looking forward to book two, which I think will be even better. As the story seems to be just starting at the end of this book. And now that we have all the introduction into the world and people over with. I will rate it 3 ½ ★ as the beginning was a bit too slow for me. 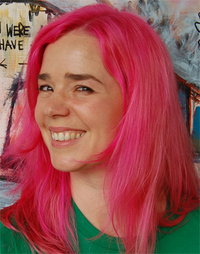 Hi! I write fantasy books. My latest is STRANGE THE DREAMER, about a young librarian, a mythic lost city, and the half-human children of murdered gods. Check it out :-) Before that I wrote the DAUGHTER OF SMOKE & BONE trilogy, which has been translated into 32 languages. It's about a blue-haired art student raised by monsters, a broken angel, and a war that has raged for 1000 years in another world. I also wrote LIPS TOUCH: THREE TIMES, which was a National Book Award finalist, and the DREAMDARK books. As well as various short stories and novellas.