Log in with Facebook
or
Wrong email address or username
Sign up
Already on BookLikes? Log in!
Incorrect verification code
Please, check your email, the code to access your BookLikes blog was sent to you already.
Enter code:
« Back Send
back to top
Search tags: Death-of-a-Chocoholic-(Hayley-Powell-Mystery) 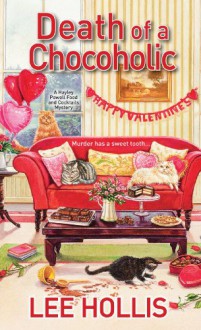 Almost never happens.  Less than 6 books have I ever put down and called it a day.  But I got a little more than halfway through (197 out of 332 pages) and just could not do it.

I've read the first three and frankly the first and third books were weak.  Really weak.  But I liked the second book quite a bit, so I thought the author had it in her and I wanted to give the series a chance to improve.  It didn't.

I'll admit I'm pretty picking about third person narrative; to me you have to write really well to make it flow and the narrative here wasn't flowing for me.  The writing felt elementary, or a bit like stage direction; I just flipped open to a random page and every single paragraph started with "Haley".  Jarring.

The other biggie for me, and the main reason I stopped reading: Haley is a mess.  I had this problem in the last book too.  I want to admire my protagonists; at a minimum, I want to be able to respect them.  Nobody respects Haley; by page 197 there were at least 3 different scenes were she did something so stupid, or so clumsily, in a crowd full of people, that everyone was laughing at her.  Not with her; at her.  If the author is aiming at humour, she's failed.  Horribly.

The book is interspersed with Haley's columns, which started out in the first book as witty and entertaining; in this book, they were just more instances of when Haley did or said something stupid and embarrassed herself with her ineptness.  Neither witty nor entertaining.

I'm sorry this series didn't improve for me; there were a lot of solid elements that could have been great:  Haley has two solid best friends she could have had some great scenes with.  I like her brother and his partner, Sergio (chief of police) too; they're entertaining when they make an appearance.  But overall, the series just doesn't resonate with me and I've added all four books to my donation bag for Friends of the Library.  I hope someone out there will give them a more appreciative home.