What a wonderful yet very powerful read. David is betrothed to Hella, he is an American living in Paris waiting for his lover to join him. A chance meeting at a Paris bar with a young attractive Italian, Giovanni, results in David questioning values that he has always believed to be true. He takes a decision that will profoundly alter the course of his life, with devastating consequences.

Giovanni's room poses the question, do we as humans follow convention and lead a life and follow a set of codes that is expected of us, or should we throw caution to the wind and by so doing be true to our self. A story that it is impossible not to be affected by and issues as important today as when the novel was first published. Highly Recomended James Mitchell Ashley is one of the many American politicians whose fame and importance are inversely related. Though a member of the United States Congress for only a decade, he served in it during one of the most important periods in its history, as he was elected on the eve of the Civil War and played a role in the impeachment of President Andrew Johnson and the implementation of Congressional Reconstruction. His greatest legacy, though, came from his efforts as a Radical Republican to end slavery, which culminated with his efforts to pilot the Thirteenth Amendment through the House of Representatives, ensuring its passage by Congress.

Part of the reason why Ashley is not better known is that most of his personal papers were destroyed prior to his death. To overcome the challenge posed by the lack of documentation, Rebecca Zietlow has written an intellectual biography of Ashley that situates his career in the political ideology of the era. As she explains, as a Democrat Ashley’s anti-slavery stance was primarily a product of his Jacksonian belief in the labor theory of value. Alienated from the increasingly proslavery Democratic Party, he found the free labor advocacy of the emerging Republicans to be far more appealing, and throughout the Civil War was among the leading advocates for using the war to end slavery. With the ratification of the Thirteenth Amendment, Ashley focused on questions of enforcement, which led to his clash with Johnson that contributed to his defeat for re-election in 1868.

Given the challenges she faced in writing a biography of Ashley, Zietlow is to be commended for producing such a valuable study of his role in one of the most important eras in America’s constitutional development. Her linkage of the anti-slavery effort to the burgeoning issues of wage labor is particularly interesting, and gives the book an added relevancy for readers. Hopefully Zietlow’s efforts will restore to Ashley some of the esteem he enjoyed among his contemporaries for his role in ending slavery in the country and a newfound appreciation for his vision of free labor in America. 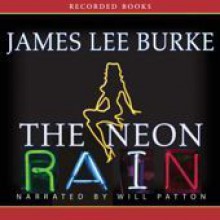 A Twitter pal talked me into starting these books and I'm glad she did.

My husband and I went on a trip to New Orleans in 1995, (so pre-Katrina), and I loved it. To this day it was the best vacation we ever had and the very best food I ever ate. We went shortly after Mardi Gras and it was warm and beautiful. We visited the zoo and botanical gardens, had lunch on the banks of the Mississippi, rode a street car through the Garden District and had dinner in the French Quarter. This book took me back there completely. Not to the touristy areas though-not at all.

The writing here is top notch, and the characters are complicated-nothing is black and white. I developed a real feeling for Dave Robicheaux and I am looking forward to reading more of the series.

I bought this audio with my hard earned cash through Audible, but I won't be buying the second one from them! (See below)

**A note to Audible-What is up with the severely abridged version of the audio for book 2? It's only 3 hours long and many reviews are complaining about that. Looks like I'll be doing some actual reading on the second book.**