Log in with Facebook
or
Wrong email address or username
Sign up
Already on BookLikes? Log in!
Incorrect verification code
Please, check your email, the code to access your BookLikes blog was sent to you already.
Enter code:
« Back Send
back to top
Search tags: Fifty-Shades “There was a lady reading this on the train back from work. I couldn't help but comment to her, "The paper version? That's a bit brazen...I thought this was secret Kindle phenomenon?" She laughed. Moments later she flirtily replied, "I couldn't find the hard back." Stressing the word 'hard'. That made me gulp and suddenly I realised she had gained all the power with that one reply. As we approached the tunnel at Rossio, I noticed I was aroused and was feeling profusely hot. Obscuring my bulge with my back pack, I made for the on-train toilet. The automatic door took an eternity to open. I stepped inside. As I turned to close the door, I drew breath as I realised I had been followed to the toilet by the lady reading the dirty book, and what's more there was another three ladies clutching their Kindles, jostling for a feel of my bulging trousers...” 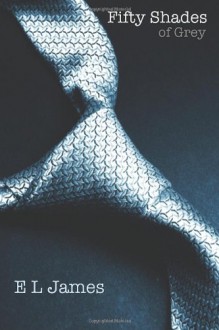 Tasks for Día de Muertos and All Saint’s Day: create a short poem, or an epitaph for your most hated book ever.

I decided these two ought to be buried in the same grave, so here we go: When literature student Anastasia Steele interviews successful entrepreneur Christian Grey, she finds him very attractive and deeply intimidating. Convinced that their meeting went badly, she tries to put him out of her mind – until he turns up at the store where she works part-time, and invites her out.

Unworldly and innocent, Ana is shocked to find she wants this man. And, when he warns her to keep her distance, it only makes her want him more.

As they embark on a passionate love affair, Ana discovers more about her own desires, as well as the dark secrets Christian keeps hidden away from public view …

This is the first book in the series by E.L. James.

Anastasia Steel is a character that found myself neither loving or hating, though I found myself rolling my eyes at her inner monologue. She is a stumbling, bumbling teen in a twenty-something young body. She is so insecure and full of angst that I wanted to strangle her. Okay, having said that, her character does grow and mature as the story progresses, which I like when reading stories. When she interviews Christian Grey on her ill roommate's behalf, she finds herself enthralled with him. When he warns her away from him, she doesn't listen to him and finds herself thrust into a world that she was woefully ill prepared for.

Let me first say that I bought this book in 2012, but due to my large reading list, and then the subsequent social media storm about this book, I decided to hold off reading it until recently. I still haven't watched the movie.

I started to read and, as many others have mentioned in their reviews, I found myself shaking my head at Ana's inner goddess monologues. However, I also knew that this was a piece of fan fiction after the author had read Twilight, so I could see some of the influence in the writing. Ana knowingly enters into a relationship with Christian. She didn't sign any contracts, apart from the secrecy one which, in my eyes meant that she went into this relationship of her own free will. Christian could have pushed her to sign the contract. In fact, if he was a complete control freak he would have. Yes, he's a controlling a-hole, but to be fair, he warned Ana on several occasions to stay away.
That contract! Goodness me! If someone handed me that contract I would run for the hills! Some of them made sense (health and safety wise) but some of the rules had me scratching my head and a red warning light flashing.

Having said all that, I actually enjoyed reading this book, even though it was like watching a train crash at times. I tried not to let anyone's opinion colour mine, so I hope those who read this review and then decide to read the book will also keep an open mind. There has been two camps saying you either love or hate this book. However, I find myself not able to definitively say which camp I fall into because I didn't love it nor did I hate it. I found it entertaining but it just didn't excite me either way. Will I continue to read the other books? Unknown at this time, but I am not ruling it out in the future. As for watching the movies, I am not sure about that either. Only time will tell.

This was E.L. James' debut novel and as such I found her writing style rather amateurish, this is not a bad thing as one has to start somewhere and improvement can always be made. The story pace was not particularly fast, but I still found myself turning the pages to find out what happened next. The story flow could have been tightened up with some scenes being shortened, but for the most part it flowed well.

Due to the nature of this book, I do not recommend it to readers under the age of 16. I do, however, recommend this book if you love contemporary romances. - Lynn Worton