Log in with Facebook
or
Wrong email address or username
Sign up
Already on BookLikes? Log in!
Incorrect verification code
Please, check your email, the code to access your BookLikes blog was sent to you already.
Enter code:
« Back Send
back to top
Search tags: Giovanni-Boccaccio 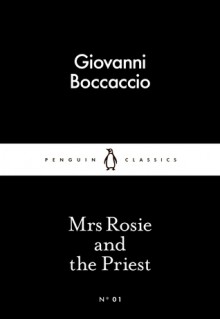 I received my box set of Little Black Classics about four years ago, in November, 2015, but hadn't really dipped into them. They survived the purging process from earlier this year, and have a place of honor in my bookshelves, taking up half of a book shelf.

I finally decided that it was time to move them up onto the "reading" list. I'm going to read one or two of them a month, on Sundays. They are nice little bite-sized bits, around 50 pages long, that I can read in an hour or so. I'm thinking that I will go in order, but I'm not fully committed to that at this point.

The first one is by Boccaccio, and are 4 excerpts from the Decameron: Andreuccio da Perugia's Neapolitian Adventures, Ricciardio da Chinzica Loses his Wife, Miss Rosie and the Priest and Patient Griselda. The back matter says "Bawdy tales of pimps, cuckolds, lovers and clever women from the 14th century Florentine masterpiece the Decameron."

Bawdy is an understatement, you guys. Certainly the second and third tales are basically medieval pornography. Not to say that they are graphic, but Boccaccio is certainly the master of the allusion - we have patches being plowed (or not) and priests using their pestles to grind in the mortars of other men's wives. They are very funny.

Patient Griselda, though? Her husband was a straight up abusive jackass and she should've stabbed him in the throat. 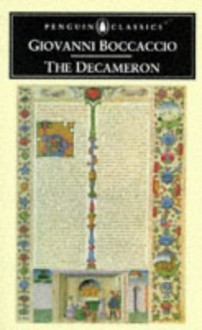 Escaping Florence for a country palace in the hopes of leaving plague behind.

The description of the Black Death is very vivid. Difficult to imagine just how terrifying it must have been: your ideas about the causes and how to protect yourself are almost entirely wrong, almost everybody who falls sick subsequently dies, law and order are breaking down and getting the necessities for survival is becoming difficult and hazardous.

1348 and the Black Death rages through Florence on its way to killing an estimated 1/3 of the human population of Europe.

Day 1 - but first, why have these ten people assembled in the first place?