Log in with Facebook
or
Wrong email address or username
Sign up
Already on BookLikes? Log in!
Incorrect verification code
Please, check your email, the code to access your BookLikes blog was sent to you already.
Enter code:
« Back Send
back to top
Search tags: Greg-Rucka 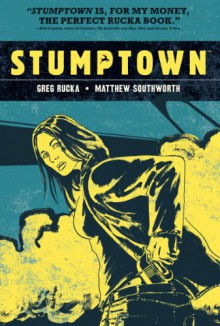 Small confession: while I'd heard of this comic, I wasn't in any rush to read it. But then I saw the trailer for the ABC adaptation and pretty much had to. Glad I did, I have to say.

Dex Parios is a P.I. in Portland, OR; apparently is the guardian for her developmentally delayed (I'm not sure, just guessing) brother; and a very poor gambler. The latter lands her in a great deal of debt to the Confederated Tribes of the Wind Coast. Thankfully(?) the woman who runs her favorite casino is willing to exchange her debt for some P.I. work -- her granddaughter is missing. Dex is a sloppy gambler, but isn't stupid.

But this is no ordinary missing teen/young adult. As soon as Dex starts looking for her, she's threatened away from the case, had the biggest gangster in the state (and probably then some) try to hire her as well (not instead of Grandma, just call him first), locked in her own trunk, shot (thankfully hitting the vest she had on under her clothes), and harassed (and lied to) by said gangster's young adult kids. The danger and the second job offer convince Dex that she need to find the girl-- and fast.

It's a great story, a pretty murky beginning gets worse due to complications and narrative time jumps. The more you learn , the more you want to understand. The solution is quickly arrived at, but it takes a long time to get things in order. Things are tricky and Dex's trying to keep everyone involved alive and maybe even (relatively speaking) honest.

I really liked it, but it felt...slim? As this collection is primarily about introducing the characters and world as well as telling the story, I'm not that annoyed by it. But I hope the next collection is more substantial (not much, but some).

Southworth's art was fitting. It's not the most gorgeous book ever, but it shouldn't be. The word "noir" is the best one I can come up with -- dark colors, lots of shadows, hard lines -- it fits. It's noir. It's also very dynamic, there's a good sense of motion to it. I can't imagine better art for Rucka's story.

Great characters, a good story, art that's a perfect complement to both. This collection nails it. I'm coming back for more Dex and Stumptown.

2
review 2018-11-20 12:02
Various stories about characters in the Lazarus saga - entertaining and enlightening 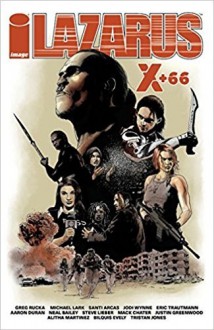 A collection of stories about the Lazari and other characters, this volume is as interesting and exciting as the reader would expect from this series. Each one contributes to the saga and the artwork is fine, detailed and enjoyable.

Recommended but only if you’ve read the rest of the series although there is some explanation before each story. I picked this up because I wanted to read The Hiketeia story.

Which was worth the price.

The Hiketeia deals with WW taking on supplicant who is wanted for murder, and who Batman is chasing. The story gets at the difference between WW and Batman. One thing that has always bugged a little about Bats (and I should not that I was not, and never will be, a regular Batman reader) is that whenever I read him, he always cared more about the bigger crimes instead of the little crimes and injustices that lead to them. In fact, he wants people to follow the rules that he doesn't follow. Bugs me. The Hiketeia addresses this, and is quite a stunning story.

The other stories are about WW's conflicting places and duties as Amazon, savior, warrior, and ambassdor. It's quite well done.
Like Reblog Comment
show activity (+) Some people are born immortal and gather together throughout the years, fighting their way against others. The plot is fairly straight-forward, including betrayal, but it's engaging and well-constructed. The illustrations are reasonably clear if not detailed but the story is easy to follow. A lot of violence and death for those who enjoy that aspect of comic-reading. Greg Rucka promises more volumes so I'm looking forward to that. Recommended as I enjoyed it.