Log in with Facebook
or
Wrong email address or username
Sign up
Already on BookLikes? Log in!
Incorrect verification code
Please, check your email, the code to access your BookLikes blog was sent to you already.
Enter code:
« Back Send
back to top
Search tags: Heir-series 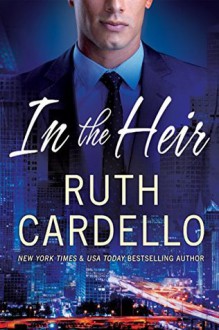 I really enjoyed this audiobook. This was my first experience with Ruth Cardello's writing and I am very happy that it turned out to be a positive one. I actually won a copy of the second book from the series but decided that I wanted to start at the beginning which turned out to be a very good choice. I ended up listening to the book in only a couple of days because I was having such a good time with it.

I went into this book expecting a romance and it did deliver on that expectation but I was surprised that the story surrounding the Westerly family would be such an important element in the story. When Delinda Westerly offers an early inheritance to the first grandchild who marries and invites the rest of the family, Spencer and his friend, Alisha, make plans to walk down the aisle. They are not in love but are great friends so they see no problem with the arrangement.

Brett meets Alisha through Spencer and can't get her out of his mind. Alisha isn't afraid to stand up to the anyone and does just that when it can protect those that she cares about. When everything falls apart, Brett is the one who is there for Alisha and I loved watching their connection to each other grow. I thought that these two characters worked really well together and I liked how they seemed to bring out the best of each other.

Terri Clark Linden did a great job with this book. I thought that she handled a pretty diverse cast of characters very well and brought a lot of emotion to the story. I have listened to her work several times and have always found her narration to be very pleasant to listen to.

I would recommend this book to romance fans. I thought that this story was really compelling and filled with wonderful characters. I plan to read much more from Ruth Cardello in the future.

Initial Thoughts
I really liked this romance. Brett and Alisha were both fantastic characters that I wanted to see work things out. They were both so giving and really cared about the people they were close to. The family drama in this one was pretty complex with a lot of side characters experiencing a lot of pain along with Brett and Alisha. I thought that the narration was very well done and added to the enjoyment of the story.

i have enjoyed most of the books in this series, this was not my favorite. Ten years, they never made the attempt, then, bing!  They meet and all the pieces fall into place. Really?  There is humor and fun, as are in all the Julia Kent books. This just lacked something. 'In the Heir' by Ruth Cardello is book One in the "Westerly Billionaire" series. This is the story of Brett Westerly and Alisha Coventry.
Alisha is trying to help her best friend's brother who both feel like family to her. Spencer Westerly asked her to marry him and she agrees to it...so that she can help him out. The Westerly Grandmother has decided that for the Grandchild that marries first and invites the family can have their inheritance.
Brett Westerly is the oldest child and one chosen to continue his father business. But this has kept in chained to his office and avoiding emotional issues of the family. There family has been divided but Brett doesn't want his younger brother marrying and have that marriage turn out like their parents. But sparks fly when Brett and Alisha meet!
This was such an good romance story...I so enjoyed. I can't wait to see more of the other family members with their stories!
"My honest review is for a special copy I voluntarily read."
https://www.amazon.com/gp/profile/A2HX0B5ELOPP5Z?ie=UTF8&ref_=sv_ys_3
https://www.facebook.com/RomanceBookReview
https://www.facebook.com/groups/1709181636033417/
https://twitter.com/soapsrus68
https://www.goodreads.com/user/show/1831318-sissy-s-romance-book-review-for-you
http://sissymaereads.blogspot.com/
https://romancebookreviewforyou.wordpress.com/
http://booklikes.com/blog
https://www.tumblr.com/blog/romancebookreviewforyoublog
https://plus.google.com/+SissyHicks
https://www.pinterest.com/u2soapsrus/

There are three lessons that my Grandmother taught me. A person is never too old to stop learning. It's not enough to crave or receive love, you must give love in return and lead by example. She was a wise woman, who was not afraid to practice what she preached. Until the day she died, she led by example in all she did. Including owning up to her mistakes. I still miss her, but carry all she taught me within my heart. The Westerly clan could have used some of her wisdom.

With In the Heir, Ms. Cardello lays the groundwork for rebuilding a broken family.
The Westerlys are far from perfect. Anger and pride has set to destroying a prominent dynasty. Can forgiveness, restore the foundation before it topples completely? In The Heir is a story of romance, friendships and family, that is written and rooted in the most powerful emotion in the world. LOVE. This had some cool setting with women Alphas who rule with cunning, strategy and strength. I was also really hopeful for the hinted love story, because you don't get a lot ot Alpha meets Alpha in M/F UF books...

Let me introduce you to the reason this sucked - and in her own words, no less:

"The bright shirt also contrasting against my alabaster skin, inherited from my Danish and Norwegian mother. I never knew my father, but I was told his heritage was Polynesian islander. Which explained my dark lashes and brows, and what some have called disconcerting turquoise eyes."

Yeah, yeah - those Polynesian islanders and their turquoise eyes! And by the way, her hair is platinum/silver blond. Impressed yet?

Which explains why she needed a person of colour as her daddy to give her dark lashes over the aquamarine eyes (she called them that later, after turquois again). The alabaster skin gets some more mentions too.

Isn't that some cool genetic mixture?

I was trying to let that kind of inner monologue run with Kate Daniel's voice in my mind and wanted to instantly burn this book.

Disappointed, you could say.