Log in with Facebook
or
Wrong email address or username
Sign up
Already on BookLikes? Log in!
Incorrect verification code
Please, check your email, the code to access your BookLikes blog was sent to you already.
Enter code:
« Back Send
back to top
Search tags: Henrietta-Clarke

Thank you, honey! That was great.

I was really looking forward to this book, but unfortunately, I didn't like it as much as I thought I would. I did enjoy the idea of the book, and some other aspects, but it the end, I was left unsatisfied. Bummer.

• The dialogue: Dialogue is fantastic when done well. This book is 90% made up of dialogue, and i have to say the author did a good job of keeping the conversations between the MCs interesting.

• Cam: This guy is utterly sweet, and he has the patience of a saint. I felt so bad for him at times, because he was very supportive and he just kept being pushed away for his efforts. Deep down a lonely guy in need of love, Cam would do anything for Riley and wait however long it took for Riley to meet him face to face.

• Riley's Italian mamma: I seriously adored this woman! She was there for her son without fail and she offered great advice. Also, I loved how she accepted Cam without a second thought and made him feel like he could have a mother, too.

• Riley: Well, how I feel about him is a little hard for me to explain. First of all, I understood why he was so insecure, and he was entitled to feel that way, after everything he went through. I got why it took him a long time to be able to come out of his shell and accept love. Still, he also frustrated me endlessly, because I–the reader–already knew Cam had liked his looks for a long time before Riley found out. So, I wanted to be as patient with him as Cam, but at times I couldn't.

• The length: This book was way too drawn out, and I think it could have benefited if 50-100 pages were cut. I mean, I liked the conversations, but some were boring. I mean the Monopoly scene, for example... That game bores me to death in real life, so I was not happy to have to read about it while it was played over the phone...

• The ending: Now this pissed me off. The whole book, I felt this sense of anticipation, of tension building up, and the end was supposed to be this big, explosive scene, y'know... Well, imagine my disappointment when it ended so abruptly that I had to do a double take... What's more, there's no sequel in sight...

I cannot get enough of this book.

This was simply beautiful.

I love it when my books have more character than plot. Make the characters interesting enough and I want to crawl inside and live in it.

Riley is so lonely he calls the number of an ad for phone sex. Cameron is the one who answers, but it turns out his number was listed as a prank from his ex.

Because Riley was scarred by a fire 3 years ago, he feels too insecure about the scars on his face to meet Cameron. Cameron keeps trying to convince Riley that he thinks Riley is beautiful no matter what he looks like. But what Riley and Cameron don’t know is that they have been seeing each other from a distance for some time now. And Cameron cannot get the cute scarred blond he keeps seeing at the coffee shop out of his mind.

Riley was incredibly sweet. So insecure about his looks, but damn, he was a funny guy! I loved the conversations between Riley and Cam. Not once was I bored.

And Cameron, I loved how patient he was with Riley. He was willing to wait forever if necessary. 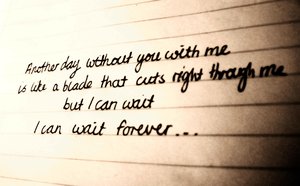 When the guys do meet it is without Cameron seeing Riley. It was so incredibly romantic.

“Do I get a goodnight kiss?” Cam asked finally, voice low and full of hope.
“Close your eyes,” Riley murmured. Their breaths were intermingling as their lips inched closer and closer, finally brushing together just barely enough to convince Cam that this was really happening. His hand went to Riley’s back, pulling his man closer, and he deepened the kiss just slightly. His cheeks were damp, and he didn’t know if the tears were his or Riley’s. Riley’s lips were moving against his again, forming words. “Don’t give up on me. Please.” A thumb brushed across his cheek, swiping at the moisture there, and then his arms were empty before his reflexes could kick in to hold Riley there forever. Their hands parted last, arms outstretched in true movie style, and when Riley let go, Cam could almost feel his heart ache with the loss.
“Never,” he whispered.

It does take some time for them to finally meet, so if you are the impatient kind, beware. Because they talked on the phone all the time, it was never a problem for me.

The end was rather abrupt and I was a bit surprised, but I was so happy to read this: