Log in with Facebook
or
Wrong email address or username
Sign up
Already on BookLikes? Log in!
Incorrect verification code
Please, check your email, the code to access your BookLikes blog was sent to you already.
Enter code:
« Back Send
back to top
Search tags: India-Black-and-the-Shadows-of-Anarchy-(A-Madam-of 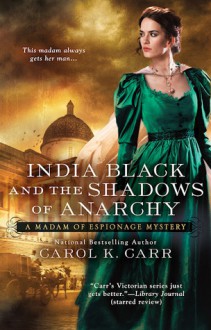 3.5
I enjoy this series but you do need to suspend disbelief somewhat.

It is no secret I love India Black. This third full length adventure with India has the elements I adored from the first book and stokes my love for this dark-haired madam slash spy. Our girl India is back in London after her stint in Scotland working undercover as a lady's maid.  Just when boredom sets in, India is enlisted by Dizzy (aka Benjamin Disraeli, Prime Minister) to infiltrate an anarchist cell in London.Her usual spy companion, French, is mysteriously assigned elsewhere (which elicited a big sigh from me -- oh, how I love that French!) and India is determined to show Dizzy and French that she can be spy extraordinaire without his help.To get in with the anarchists, India lures a prostitute from another brothel, inspiring ire from her competing madam, and she has to juggle brothel feuds with convincing a group of paranoid anarchists that she's the real deal.  Around all that, she tries to learn more about her mother and ascertain just what is going on with French.  There's the usual delicious banter, bouncing action, and hint of romance that I adore.In addition to the snark and antics I just love in Carr's novel, this book was a particular winner for me in that the story returned squarely to India and her profession. While I enjoyed the second novel, I thought that by sending India away from her brothel, it became easy to ignore her work-- and I was a little afraid India was going to be whitewashed. I shouldn't have worried: India is back in all her tawdry glory. While Carr doesn't delve into any salacious or sexy details, she also doesn't pretend India hasn't turned tricks herself. And I love that about India and Carr's articulation of her: there's no shame in India about what she does.For India Black fans, this is a welcome volume featuring all that is fabulous in Carr's series: our deliciously lovely heroine, an action-filled mystery, a little romantic intrigue with a dashing government spy, witty banter, handguns and whiskey. If you're new to India Black, immediately get yourself the first book (named after our heroine) and read on to this one!  (While Carr explains enough of books one and two for someone to follow along, you'll be happier with the twists if you've read the previous two!)As with all of Carr's novels, the moment I'm done I'm dying for more, and this one was no exception. I'm just going to sigh away in a corner and await India's next adventure with bated breath.
Like Reblog Comment 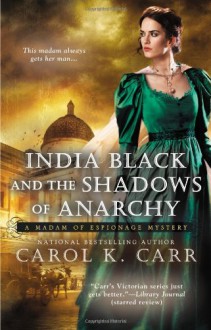 WHAT.How can you do this to me, Carol K. Carr? I just.. I can't even.... How... Why...UGH!I need book four now. This minute. I just can't take it anymore!But, I did learn French's name. Finally. That was the biggest mystery from all three novels.Review to come once I've sorted through all my feels.
Like Reblog Comment

A fun read. An interesting plot that was sort of funny at the end. Great acerbic wit from India. Each of the characters in Ms. Black's world are excellently drawn and real enough that one can picture them as they interact with one another. Indeed, as much as I like the character of Vincent, I really wish he'd embrace personal hygiene as I find my nose crinkling up every time he arrives on the scene, as if I smell something foul.

Ms. Carr does such an excellent job describing Victorian London that I find myself cringing every time anyone has to walk in the rain, or has the misfortune to get dunked in the Thames. And we're finally getting down to brass tacks about both French and India's background. Lots of obstacles for these two, aside from her being a madam!

I'm really looking forward to India and French's next adventure, and learning more about where Ms. Black's familial roots lie...