Log in with Facebook
or
Wrong email address or username
Sign up
Already on BookLikes? Log in!
Incorrect verification code
Please, check your email, the code to access your BookLikes blog was sent to you already.
Enter code:
« Back Send
back to top
Search tags: Jerome-K-Jerome 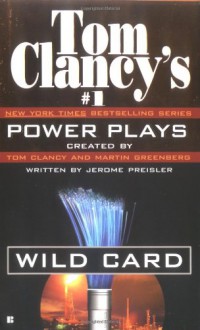 There is trouble in paradise as oil, murder, and long-lived shadowy cabals overshadow Trinidad just as UpLink is setting up an installation.  Wild Card is the eighth and final installment of the Power Plays series written by Jerome Preisler as Pete Nimec goes to Trinidad on a working vacation and steps into international intrigue while suspended Tom Ricci goes renegade to rescue a kidnapped daughter for a small-time Mexican cartel leader.

Over two centuries ago, a French nobleman living on Trinidad and an English pirate form a partnership that their descendants continue by selling oil to rogue nations that the United States have put an embargo on.  A Trinidadian Jarvis Lenard escapes from a rogue element within a high-end resort’s security force after his cousin attempted to blow the whistle and was murdered, staying for weeks in a nature preserve causing fits to the rouge security force.  Pete Nimec is sent to look at the new UpLink project in Trinidad as well as figure out about the mysterious emails they received, he sees an oil transfer not knowing at the time what he saw but later figures it out, but the rogue security teams aims to kill him and his wife while they’re enjoying the resort.  Nimec and his wife escape on a boat, making their way to the nature preserve where Lenard is hiding and swims out to them as Sword helicopters come in and scare off the rogue security team’s helicopter.  Meanwhile Tom Ricci is on leave from UpLink after saving New York City because he did so without letting local, state, and federal authorities as well as the company know what was happening.  Ricci links up with the former DEA agent that has helped him on two previous occasions, helping save a kidnapped young woman whose father is a Mexican cartel leader while starting a friendship with Julia Gordian.

Unlike the previous book in the series, the three subplots that were not only worth their print on paper but came together to create a satisfying whole.  The first and only prologue in the series that showed the creation of the centuries-old partnership between the families of a French nobleman and an English pirate that had their descendants coming up with this oil smuggling scheme that is found out.  While the character development was sparse for returning characters, one-off characters had development put into them—especially Jarvis.  If this was written to be a quick page turner it succeeded but given the scattered shot subplots not only in this book but the previous one the well of ideas had run out for the series.

Wild Card is the final book of the Power Plays series, the ending of which was written in a way so that Jerome Preisler could either continue it or not depending on the publisher.  While a drastic improvement over the previous book in the series, this book showed that the series did not have enough legs to continue. 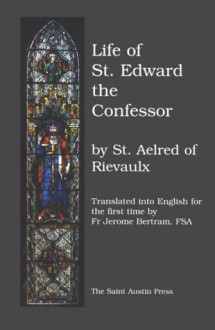 My eighteenth review is up on the Best British Biographies website! Please enjoy with my compliments. 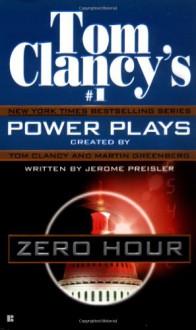 Precious stones, secret technology, and black-market deals plus New York City makes for an interesting combination that slowly finds UpLink getting involved via an unexpected source.  Zero Hour is the seventh book of Tom Clancy’s Power Plays series written by Jeremy Preisler who brings together secondary characters from previous books to join the main cast.

Patrick Sullivan leaves his mistress’ apartment to meet his buyer of artificially created sapphires as well as plans for a laser gun codenamed Dragonfly but is killed by his buyer and becomes a missing person.  Sullivan’s employer, a Pakistani national who doesn’t know Sullivan stole the plan, is planning to use the laser gun for a massive terrorist attack by releasing a deadly acid vapor cloud over New York City as well as sell the other prototype to Muslim freedom fighters in Kashmir.  Sullivan’s wife goes to an UpLink employee who was his last meeting and asked for Sword’s help—thanks to newspaper reporting on UpLink’s help to find the Russian conspirators who attacked Time’s Square—to find her husband.  The employee goes around the local Sword leader to Roger Gordian to ask for the favor forcing the new UpLink CEO to send Tom Ricci to New York to investigate the matter.  Ricci and the local Sword leader discuss her investigation into Sullivan’s employer on what to do with the Sullivan matter then Ricci goes to upstate New York to spy on Sullivan’s employer and sees men packing things into a U-Haul that he tails to a nearby motel and has a local Sword operative observe it while learning where it was rented.  Unfortunately, one of the terrorists make the lookout and arrange an escape, but Ricci meets with Sullivan’s murderer and learns about the Dragonfly that he connects with where the U-Haul was rented.  Ricci leads a Sword team that intercepts that van just before the laser gun was powered up.

Honestly the above synopsis is leaving out two subplots that at the end of the book amounted to just taking up space even though one was entertaining and had potential to add to the overall story but fizzled to nothing.  Upon ending this book it wasn’t hard to rate this the worst book of the Power Plays series as nothing really came together and Preisler focused on characters who in the end amounted to nothing in the overall scheme of things while a character study on Ricci was underwhelming.  And as one of the shortest books in the series it really tells and exposes one of the biggest weaknesses of Preisler’s writing.

Zero Hour is short and devoid of coherence in the various narrative threads while focusing on characters that in the end did not having anything to do with the endgame.  Jeremy Preisler has written some good installments of this series, but all the things he’s done wrong in the so-so installments were on display making for a disappointing book. 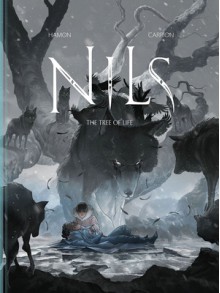 The cover was what initially pulled me towards Nils: The Tree of Life, because recently I had the feeling I was tiring a bit from the dystopian novels, having previously everything I could get my hands on. Especially within the graphic novels, I’ve often felt disappointed with the execution of the concepts.

I did not need to worry though. First of all, the artwork was splendid and even if there had been no story, I would have liked to look at it. The colors worked really well. I’ve read some reviews stating that the story felt rushed and little detailed but I don’t fully agree with them. Of course, there is a limited amount of information one can get across in the span of a 200 pages graphic novel, but still I got a good grasp (I think) of what was going on. A lot is happening at any time, and I do agree that there has not been a lot of character development, but this didn’t bother me too much.

In equatorial Africa as a small nation attempts to become a leader in the region through its offshore resources and becoming headquarters to information revolution for all of Africa, but who is in charge is suddenly up in the air.  Cutting Edge is the sixth book of Tom Clancy’s Power Plays series written by Jerome Preisler, as Roger Gordian’s UpLink International takes over a pan-African fiberoptic network he unexpectedly finds himself against Harlan DeVane who’s attacked his company and tried to kill him already.

Offshore of Gabon two divers for a French technology company die after sabotaged by Harlan DeVane’s associates which leads to the company selling their fiberoptic network to UpLink and getting government approval even though DeVane bribed numerous politicians to stop it.  Pete Nimec leads the Sword team as UpLink moves into the country as DeVane plans to strike at UpLink and Gordian himself.  DeVane begins to harass UpLink’s buildup including an assault on a convoy, but as a distraction for his main strike against Gordian.  DeVane activates his mercenary agent who activates his sleeper sell in the United States that stalks the Gordian family before finding a target, his daughter Julia.  The DeVane’s crew abducts Julia from the greyhound rescue shelter she’s been volunteering at, killing one of the owners and her infant daughter in the process.  After the police visit UpLink headquarters, Tom Ricci begins investigating her kidnapping skirting around the police to get evidence that quickly leads to the conclusion it’s the same man who he faced off in Ukraine and Ontario.  DeVane sends Gordian a ransom message to dissolve his company immediately or his daughter dies, however before Gordian decides to do so Ricci finds where Julia is being kept and leads a Sword team that rescues her and kills the mercenary that’s trouble them for years.  In the end, DeVane slinks away from Gabon.

Preisler emphasize characters and technology throughout the book, not at the expense the plot but the narrative was quickly transitioned from one time period to another until towards the end during Julia’s kidnapping.  Though Preisler does a great job at exploring DeVane’s, Nimec’s, Ricci’s, and the mercenary’s characters in this book and keeps the reader hooked; yet the departures into technological explanations bogged the book down at times.  This book was longer than the previous installment which resulted in a overall better book.

Cutting Edge is a return to the very good standard that Preisler established in this series after the substandard previous installment.  With DeVane exit at the end of the book, the best subplot of the three of the last four books is finished with a bit of satisfaction for the reader that’s invested in the reading the series.