Log in with Facebook
or
Wrong email address or username
Sign up
Already on BookLikes? Log in!
Incorrect verification code
Please, check your email, the code to access your BookLikes blog was sent to you already.
Enter code:
« Back Send
back to top
Search tags: King-Tut-references Sometime in junior high or high school I bumped into Motel of the Mysteries in a library. And while I'm not sure it changed my life, it intrigued me like crazy, because other kids that I talked to weren't sure if it was real or not. The text seemed to imply that this was all true, sort of. (I don't think any of us were reading it carefully enough.)(Also stay tuned, there will be quotes) It's as if there was a mash up of In Search Of, the story of the King Tut Excavation/Discovery, and those tv shows about Modern Well Known Cities Envisioned As Ruins. With an odd reference to ancient aliens tossed in.

The book was published in 1979, which was during the time that the King Tut exhibit/tour came to the US (1972-1981). Egypt-mania was all over the place, as were documentaries about archeology. We couldn't get tickets to the tour after traveling to the nearest city where it stopped (it sold out), but I did get a cool hologram necklace of the golden burial mask. (I no longer have it thanks to a house theft. I'm still bummed. I'm sure I could get another online if I went looking - but it was also really tacky fake gold, so, no. Plus I still have my mood ring, so I'm set for faddish jewelry of the 70s.)

The author and artist of the book is David Macaulay - and while Motel came out two years after his well received (among us kids in the library, and the Caldecott people) book Castle, he wasn't as well known then as he was after 1988's The Way Things Work. 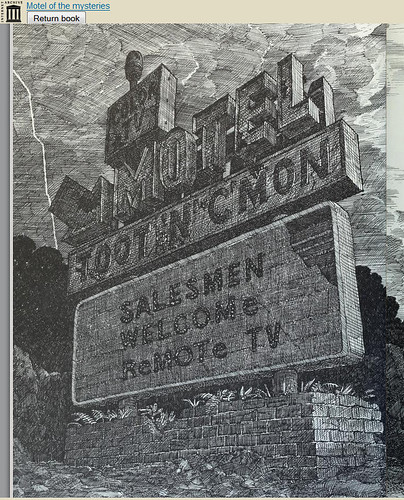 We learn the story of the discovery, work at the dig site and lab, and finally the museum exhibitions. And final "on site reenactments". The last part of the book - The Treasures - is full of the items found with a detailed descriptions - similar to what you'd see on a museum display card. And then: "Souvenirs and Quality Reproductions" - in other words, things you can buy in the gift store. (I'm still amused by the Coffee Set.)