Log in with Facebook
or
Wrong email address or username
Sign up
Already on BookLikes? Log in!
Incorrect verification code
Please, check your email, the code to access your BookLikes blog was sent to you already.
Enter code:
« Back Send
back to top
Search tags: Little-Kid-Thief Prime Green CBD Oil There is a veritable clarification behind the activities of Canzana CBDoil. Your endocannabinoid structure (ECS) is submitted for orchestrating key body works out, for example, resting, releasing up, eating, disturbance, mental cutoff centers, and incredibly more 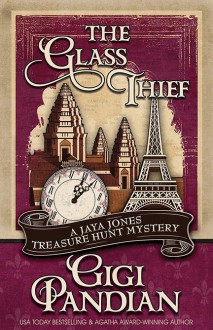 I never know what to say about these books.  They're cozy, but with an Indiana Jones/Where in the World is Carmen Santiago mash up vibe.  All the mysteries in this series are rooted in off the beaten path historical fact, usually, but not always, India's past, and always center on some type of treasure that's been looted, or being searched for in order to be looted.  It's this that keeps me coming back to these books if I'm honest.  I like the characters well enough, but I'm not as invested in them as I could be.

The Glass Thief is supposed to be an homage to Elizabeth Peters' character Vicky Bliss, but - and admittedly it's been over a decade since I've read them - I didn't see it.  The romantic relationship here is similar, but otherwise I'd have to re-read the Vicky Bliss books to see more.  The plot twist was obvious from the beginning, so the "gasp!" moment mid-way was less gasp! and more eye-roll.  But overall it was a good story that kept me entertained, which is something of an accomplishment lately, so it deserves merit for that.

suspending all sense of disbelief.

I pretty much figured that much out when I read the blurb. 'Thief In the Light' in fact has 3 MCs in it and no we're not talking about a ménage à trois with this one since the third MC that I'm referring to happens to be a house named 'Mildred' or more formally 'The Oaks'.

It's been a long time since I've read a book by this author, but I'm really glad that I was able to get to this one. I think we're all familiar with the expression that 'something has character' well in this case that something happens to be a house that has gone straight past 'having character' into she's got personality.

From the first time that Arnold Kreed (just call him Kreed because Arnold...so doesn't suit him) entered 'The Oaks' he felt like he'd come home and that was it the deal was done. He bought the beautiful old Victorian style house and turned it into a B&B and hasn't looked back.

The night that Lucky finds himself lying in a ditch on the side of the road and facing what he sure is one of the most uptight people he's ever met turns out to be the luckiest night of his life. When Mathilda insist on helping Lucky out of the ditch and into her car so she can drop him off at Kreed's B&B. When Lucky enters the B&B he's determined to sneak out and be on his way ASAP but one look at Kreed and he suddenly finds himself breaking all the rules...even rule #1 the most important rule of them all...DON'T STAY!

'Thief In the Light' is actually the second paranormal story that I've read or listened to featuring a house that's decidedly sentient. However for me that's where the similarities between 'Thief In the Light' and 'Surreal House' ends...well that and the fact that I really enjoyed both stories.

While I truly consider Mildred to be one of the MCs in this story she was definitely not central to the story and by that I mean the story could have been told without her, however, I truly don't think it would have been nearly as much fun to read. The house's presence was given to us in subtle...believable ways for lack of a better way to express it. We know how she feels about things by the slamming and/or locking of doors, people suddenly running out of hot water even though they've just turned the shower on. Bells tinkling when a someone enters even though there's not bell, groaning of pipes, squeaking floorboards...that no one's walking on and other such idiosyncratic happenings that make Mildred a consistent and fun character in the story without having her steal the center stage.

Kreed and Lucky both had issues and unfortunately people from their past that they're going to need to deal with before they can begin to find their happily ever after, but it's with the beginnings of friendship, trust and faith in each other that they're able to do this along with the support of a small but caring community. Ms Samms has filled this story out with some wonderful secondary characters whom I would happily spend more time with. From Mathilda who first brings Lucky to Kreed's B&B to Steph, Steve, & Jake the siblings who run the bookstore across the street from the B&B, to Mr. Benson the local barber just to mention a few.

While there were some things about the ending that felt a little bit glossed over for me. I also have to wonder if there had been more detail in regards to certain situations, events and outcomes if things might not have ended up being a bit less enjoyable with regards to the outcome of things from Lucky's past (I apologize for the vagueness here but I'm trying to keep it spoiler free) as for the out come of things from Kreed's past/present situation I wanted more detail as it felt like some people got away with things with impunity and seriously that was not good...not good at all. I wanted them to have to face the consequences of their actions and it just didn't feel like they did...so that's mostly why only 4 stars and not 5 for me.

"Thief In the Light" is the  first book in this newest series by Jaime Samms and I have to admit that while Kreed and Lucky's story was solid as it stands I'm so looking forward to more and finding out what and who's happening next.

An ARC of "Thief In the Light" was graciously provided by the author in exchange for an honest review.