Log in with Facebook
or
Wrong email address or username
Sign up
Already on BookLikes? Log in!
Incorrect verification code
Please, check your email, the code to access your BookLikes blog was sent to you already.
Enter code:
« Back Send
back to top
Search tags: Louise-Allen This set of Novellas starts out well with The Captain's Christmas Journey where Captain Everard is escorting Verity to her job as governess only to discover that her prospective employers are terrible people that he wouldn't let mind his coat never mind a human.

Eleanor advertises for a suitable gentleman to pose as her bethrothed over Christmas, Captain Andrew Padgett Stanton is waiting for the paperwork to declare him Lord Ravenscroft and meanwhile he's at a loose end. On half pay from the Armed Forces he's getting tired of relying on friends to help. Sparks fly and it's a fun read.

Lord Montague Pearse and Lady Juliet Sommersby are caught in a compromising position and have to find out if they compatable. An opportunity to know each other happens when they're retrieving mistletoe in the estate.

All the stories are well done and enjoyable but I really enjoyed the first story by Carla Kelly and wanted more. Gabrielle Frost has a problem, she needs an heir, but if she marries she will lose everything, including the vineyards she has tended in Portugal. When Nathaniel Graystone, Earl of Leybourne arrives to bring her back to London to satisfy his godmother and her aunt (one and the same person) Gabrielle wonders if she could get a child on him and retreat back to Portugal. But then she starts falling for him, but he has duties in England. Can they reconcile the issues?

Yeah, it all works out in the end but I was almost screaming at them about the solutions. Still I would suspect that it wouldn't have occured to them in reality. He was a bit of an ass about it initially but his respect does grow and he earns her love.

I have read One Night Under the Mistletoe so far but look forward to reading the rest of the stories. One Night Under the Mistletoe was a touching second chance/reunion story. Juliet was hurt by Monty's rejection years earlier when a mistake by Monty leads to marriage. As they worked through their fears and pain, with truth between them, they find their way back into each others hearts. This was a wonderful read, tears included. I loved both characters. I highly recommend this story, which is the second story in the Sommersby Brides series.

I received an ARC of this story through the author, and this is my unsolicited review.

There are some flaws here with his attitude and inability to talk to explain that he actually loves her. Yes he needs her help to keep his lands and she wants to find a place for herself. She doesn't realise that she has money and will lose it if she doesn't marry. Life is complicated and the two of them have known each other for a long time but there's an attraction there.

Entertaining but there are times when the petty conflicts could have been solved by more talk. 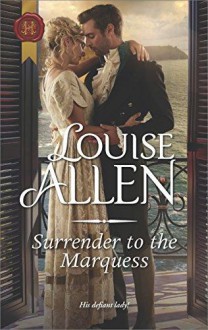 Lady Sarah Herriand's husband died in a duel and she has retired to a seaside village to run an art and tea shop and to try to decide where to go next with her life.  Into this life comes Lucian Avery, Marquess of Cannock who is going incognito in the villiage to try to get his sister to recover from a disastrous love affair where she has descended into depression.

I liked the interactions between the characters and their attitude to each other, though talking a bit more could have sorted some of their problems.  Still Lucian is a good foil for Sarah and the two of them sound like they will be a good couple long-term.