Log in with Facebook
or
Wrong email address or username
Sign up
Already on BookLikes? Log in!
Incorrect verification code
Please, check your email, the code to access your BookLikes blog was sent to you already.
Enter code:
« Back Send
back to top
Search tags: Maeve-Kerrigan 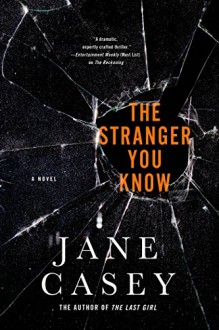 Although this suspense, mystery was a little slow to get into, it soon had me spending late nights to read more. I received this book for free and voluntarily chose to review it. I've given it a 4.5* rating. There was a lot going on in this story and the heroine had a lot of guts and stamina to handle her job working in the British police force. It had a fantastic ending as well. Lots of twists and turns in this and it certainly kept me turning the pages. Sometimes I thought I knew who did it and then sometimes not. Not for the under 18 readers. This was my fourth book by Jane Casey and as usual, she did not let me down. This one begins with a teenager coming home early from her dad's home from a weekend stay. The real reason why is given later in the book, but the beginning having you believe it was because of her stepmother. And, believe me, if I had a stepmother like that, I don't think I would ever go to my dad's house. She is just one person in a very long list of suspects in this book.

The teenager, Chloe, is a little slow and when she opens up the front door to her house, all she can see is blood everywhere. However, because Chloe is what she is, she thinks its dirt and wonders how it got everywhere like it did.

On to the investigation, Maeve Kerrigan is called in to determine what actually happened in Chloe's house and the story enfolds into a very strange case.

As usual, there is the action and suspense that is typical of any Jane Case book. Also the entertaining and enjoyable factor that I have come to expect with her books. A story that will have you guessing and guessing again and again.

Thanks to St. Martins Press and Net Galley for providing me with a free e-galley in exchange for an honest, unbiased review.

Chloe Emery returns home after a weekend away to find her mother gone. In her place is a wave of blood covering the house. Maeve Kerrigan and her colleagues are called to investigate. What secrets was Kate Emery keeping and where is she? If there are all the signs of violence, but no body, is it really murder?

This is the first Jane Casey novel I have read and I didn’t know what I had been missing out on. My first thought on finishing the book was – Brilliant.

The narrative grabs from the opening, leaving the reader intrigued to find out more. I did not have any previous reader relationship with Kerrigan and her colleagues so I was a little worried that I would find some aspects of the story passing me by. My worries were unfounded.

There is an acerbic, dark humour to the writing that I felt worked perfectly with the story and characters. I loved the interaction between Kerrigan and Derwent. The banter offset the seriousness of the case to a tee. Theirs is a great example of a fictional duo, the trust shown in the easy, yet sometimes turbulent relationship between the two. Kerrigan’s new colleague Georgia Shaw is annoying, too over confident for someone so newly part of the team, trying too hard to impress the wrong people, though that is, I think, how Jane Casey intended her to be portrayed.

The story revolves around few characters, making it easy to follow. As a result there is a closed room mystery feel to the novel. It is obvious that there was more to Kate Emery that met the eye and that the houses on Valerian Road were keeping many secrets. The story examines the fact that we never truly know someone and that the motives behind their actions aren’t always as they appear.

This is book seven in the Maeve Kerrigan series but it can easily be read without having read the rest in the series.

Cleverly constructed, engaging and gripping, the perfect combination for a crime thriller. I look forward to reading more from Jane Casey soon.

This is the seventh in the Maeve Kerrigan series of detective novels but my first. It involves the disappearance and possible murder of a single mother in Putney and the police investigation into her death. This involves many of her neighbours, her daughter, her ex-husband and his new family. Many twists and tuns along the way make this an intriguing novel although one “coincidence” didn't ring true for me.

The writing is engaging as are the characters although it's hard to warm to any of them with their flaws. Some humour is injected successfully and I enjoyed the story and would recommend it to all lovers of detective fiction.

Thanks to NetGalley and to Harper Collins for providing me with an ARC copy of this novel that I’ve voluntarily chosen to review.

This is the seventh novel in the Maeve Kerrigan series, and although it’s a standalone book that can be followed without difficulty even without having read any of the rest (as that was the case for me) I wondered about how I would have felt about the characters if I had known their background. As is the case in police-procedural series (this one set in London, UK), we have the case that is being investigated on the one side, and, on the other, those doing the investigating.

The case in this novel is quite original (although not unheard of). There is a crime scene without a body and a pretty bloody and dramatic one at that. The owner of the house has disappeared and her daughter, Chloe, who has learning difficulties (although the specific diagnosis is a matter of debate), suddenly comes back early from her stay at her father’s (her parents are divorced) and walks into a nightmarish scene. The first chapter, that follows Chloe’s return home and what she finds there, is told in the third person from her point of view, and due to her cognitive difficulties, we get to sense the confusion and chaos of her not assimilating or understanding fully what she’s seeing. It reminded me (although the effect was far less disorienting and shocking here) of the beginning of Faulkner’s The Sound and the Fury, where we also see things from the point of view of a character who has little understanding of what is happening.

Most of the rest of the story is told in the first person from the perspective of Maeve Kerrigan, now detective sergeant, who is still trying to get used to her promotion and has mixed feelings about the new detective she’s been assigned (Georgina, who doesn’t have much experience on the job but seems to know important people and has ticked the right boxes). We get some hints at previous events, like the fact that Kerrigan feels guilty for the death of one of the members of the team, that her boyfriend moved out a long time ago but she’s still hopeful he might come back and we see and experience her interesting relationship with Derwent, who is one of the most entertaining characters, although I did feel there was a lot of background information I was missing, that might have helped me enjoy the nuances of their interactions more. The last chapter is again told in the third person, from the point of view of another one of the characters in the case, Bethany, a girl of fifteen, and that creates a nice symmetry in the structure of the novel.

The case has all the elements one could wish for: complex family relationships, secrets and lies, blackmail, suspects galore, alternative religious organisations, action, chases, dead-ends, adultery, love stories, risky and dangerous situations, twists and turns, and yes, a final twist.

The book is well written, a page-turner, flows well and although it follows the requisite investigative procedures, is not heavy on terminology and offers enough details without being too gore. I only missed feeling more connected to Kerrigan and the rest of the team (perhaps because I’d missed too much of the background story up to that point).

A good read, entertaining and that will keep readers guessing. Recommended to lovers of police procedural novels set in the UK, looking for a fast read, full of action and heavier on plot than on characterisation.