Log in with Facebook
or
Wrong email address or username
Sign up
Already on BookLikes? Log in!
Incorrect verification code
Please, check your email, the code to access your BookLikes blog was sent to you already.
Enter code:
« Back Send
back to top
Search tags: Mistletoe-Cowboy I admit the reservations of both H/h about not entering into a relationship dragged on a tad too long, and the final setback was a bit too much, but I enjoyed this story. I am a big fan of Carolyn Browns books ! I have to say that I did enjoy this book and others in her Cowboy series.For me the story was a little slow going but, sometimes that is okay.I did enjoy both characters both Sage and Creed.Both characters are have commitment phobias and don't always trust there hearts.

I love strong women in stories and Sage was definitely one of those strong characters.Sage is an artist/painter and has come home to paint at her grandmothers ranch but , to also talk her grandmother out of selling the ranch she grew up on. The ranch gave Sage a sense of security and love. The ranch is more of a safety net , there she knows she is well loved and safe and does not have to put her self out there among the others where she might get her heart stomped on again.

Creed on the other hand has similar issues but, mainly because his previous relationship didn't goes so well an has the same commitment issues as Sage and also not wanting to open up to others leaving him vulnerable again. But, he is one determined Cowboy and he wants this ranch and will fight Sage to the bitter end to have it for himself as it as been a dream of his for a long time to own his own ranch.

One of the things I like about Carolyn's books are that they are the kind of books you can curl up and read anywhere . I also call her books the feel good books meaning that once you start one of her novels you find yourself smiling and grinning and laughing throughout her stories and most often have you crying. But, once opening one of her books especially if you have had a bad day she has you smiling in no time at all.

There are lots of things that I enjoyed about the story the slow budding romance between Sage and Creed. I enjoyed seeing them opening up to one another even though each may have not ave realized they were helping one another to heal there past hurts.Loved Sage's interactions with the animals even though she was never really been a lover of them.Creed was just one down home Cowboy with a big loving heart for those he cared about and especially they way he went about caring for those animals in this story.He was one sexy cowboy who makes your heart go a flutter with his good looks and good deeds.He's the kind of cowboy we all wish to bring home to momma.

You got to love the spunk of both Sages grand-mother and Sages grandmother's sister these two gals were a hoot to read about giving you quite a few laughs the interaction between these two old gals who have so much spunk had you laughing out loud many times throughout the story. Priceless...

A cute Christmas time story where a couple of loners find love perhaps even there soul mate when neither is looking .But, fate put this couple in each other paths and destiny just has to flow and in the end they will gain there hearts desire if they both can just get over there pasts and not let it hurt there future that this couple has started to forge. Both need to let go and trust there hearts. Great book and quite an enjoyable fast read ! Who doesn't love a romance story taking place in a massive snow storm ? Me ....I am a sucker for those kinds of reads there right up my alley as they say ! A recommended read to all. And be sure to read Carolyn other books in her cowboy series you won't be disappointed. 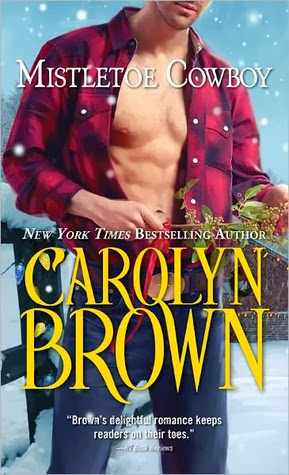 Commitment! It made Sage run the other way. It made Creed shudder. But Sage's granny, the Widow Presley, was determined to get her granddaughter a cowboy for Christmas. And who better than Creed, the man interested in purchasing the widow's Rockin' C Ranch?

The fact that a three-day blizzard was blowing in just made things all the better. A person can't run from commitment when they're snowed in, now can they?

Mistletoe Cowboy is book 5 in Brown’s Spikes and Spurs series. I was hooked from the first page to the last and didn’t want the book to end. I couldn’t put this book down.

This western romance set in Texas but parts of the story took place in Pennsylvania. There’s a hunky cowboy, a granddaughter who comes home to save their family ranch and a feisty grandma to boot. What’s not to love especially when there was immediate chemistry between the cowboy, Creed, and the granddaughter, Sage, they fought it as much as possible until they each realized what they were feeling. They were also very supportive of each other, even though they had just met, and tended to help each other whenever possible.

I loved the descriptions of everything the blizzard, the ranch, Sage’s paintings, the newly found pets and their kittens and puppies were so well described I felt like I was there. Feeling the cold and wind, sinking into the snow when having to go out to take care of the ranch animals, and feeling the warmth of the fire transported me. The plot and characters were fantastic. There was laughter, tears, angst, sorrow, happiness, fighting and then making up along with romance and love.

If you haven’t read books by Carolyn before, give her a try. You’ll be glad you did. She’s one of my favorite authors and her books will be added to my ever increasing TBR pile!

Favorite Quote: “I heard her voice again, Creed, and she’s fine.”
Creed pulled her to his chest and tipped her chin up with his fist. “Why wouldn’t she be? She’s doing exactly what she wants to do.” All the air left Sage’s lungs. She wanted her grandmother to come home and never leave again, but after only three days she didn’t want Creed to leave either. She wanted him to kiss her. She wanted to snuggle into his arms and listen to him describe her paintings to her. She couldn’t have it all and she only had until Christmas to decide what she wanted most.

Mistletoe Cowboy by Carolyn Brown
Sage Presley heads home in time for Christmas to help her grandmother out. Problem is she's left before the snow storm and in her place is a man who will take care of the cattle ranch before she returns in 3 weeks time, as per their agreement.
If he can handle the ranch she may just sell it to him. She is an artist and paints and sells most of her work in Colorado.
Creed Riley loves taking care of the ranch, they have no electricity or phone service but with propane and a wood stove they manage to prepare meals that are hearty.
They share with the chores. He always seems to arrive in the house with mistletoe in his hat and he wants a kiss.
They encounter many surprises...Loved hearing about the snowball fights, Christmas tree decorating and the baking. Hot steamy sex just adds to this book. Birthing of the snow children was wicked hilarious!
Love his version of the mistletoe and the berries. Not a typical romance book, it's so much more! This is a series but the books can be read as standalones.