Log in with Facebook
or
Wrong email address or username
Sign up
Already on BookLikes? Log in!
Incorrect verification code
Please, check your email, the code to access your BookLikes blog was sent to you already.
Enter code:
« Back Send
back to top
Search tags: Nancy-Drew-in-the-1980s 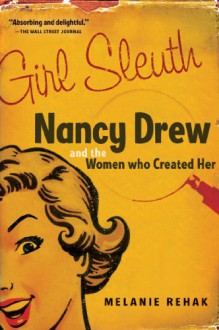 Just finishing my review post - and when I read over this quote I thought that I really wanted to share all of it. And hey, why not? So rather than use it all in the actual review I thought I'd make a separate post.

For those who haven't read any Nancy Drew, her traditional description is that of a smart, curious, and adventurous girl, more interested in solving mysteries than anything else. While other girls were fixated on boys, dances, and dresses, Nancy was hopping in her car and driving off to look for clues to whatever mystery she'd stumbled onto. Nancy's two friends Bess and George (a tomboy who'd been given a boy's name on purpose by her family, in the early stories at least) willingly followed her into these adventures. Her boyfriend Ned was also willing to follow her lead - though he was now and then known to worry over some of her plans, he always deferred to her mystery-solving abilities. Nancy was the active sort who'd explore a problem herself rather than wait around for adults to help. She was polite and ladylike - these were books from the 1930s-1950s, after all - but the mystery-solving, active role was what many readers really liked about her. (Many other female characters of that time were passive - always having to wait for help, someone to drive them somewhere, rescue them, etc. etc.)

The following is an excerpt from Girl Sleuth about bringing the series and the character into the 80s. Think of the description I've given you and compare it to the following. (69% into the ebook, first paragraph is author Rehak's summary of the book):

The first volume of the Nancy Drew Files, titled Secrets Can Kill, was published on June 1, 1986. Clocking in at 153 pages, its cover showed a distinctly eighties Nancy with feathered hair and tight jeans... ...the plot involved Nancy going undercover at Bedford High to investigate a series of crimes - it was clear that not only Nancy, but Bess and George, had arrived in the present, and that S& S had identified “the interests and concerns of today’s teens” primarily as boys and clothes and the kind of superficial issues that the Nancy of old would never have considered:

"Nancy studied herself in the mirror. She liked what she saw. The tight jeans looked great on her long, slim legs and the green sweater complemented her strawberry-blond hair. Her eyes flashed with the excitement of a new case. She was counting on solving the little mystery fairly easily. In fact, Nancy thought it would probably be fun! "Right now," she said to her two friends, "the hardest part of this case is deciding what to wear."

"That’s all she needs," George joked. "A bunch of freshmen following her around like underage puppies."

"Oh, yeah? Have you seen the captain of the Bedford football team?" Bess rolled her eyes. "They don’t call him ‘Hunk’ Hogan for nothing!"

Bess and George were Nancy’s best friends, and they were cousins, but that was about all they had in common. Blondhaired Bess was bubbly and easygoing, and always on the lookout for two things: a good diet and a great date. So far she hadn’t found either. She was constantly trying to lose five pounds, and she fell in and out of love every other month.

George, with curly dark hair and a shy smile, was quiet, with a dry sense of humor and the beautifully toned body of an athlete . George liked boys as much as Bess did, but she was more serious about love. "When I fall," she’d say, "it’s going to be for real."

S&S in the first paragraph stands for Simon and Schuster, who'd just taken over publication of the series. Even though Nancy'd been around since the 1930s, publishers still hadn't figured out what made her appealing by the 1980s - at least to judge from this sample.