Log in with Facebook
or
Wrong email address or username
Sign up
Already on BookLikes? Log in!
Incorrect verification code
Please, check your email, the code to access your BookLikes blog was sent to you already.
Enter code:
« Back Send
back to top
Search tags: Observation I would give this more than 5 stars if I could! What if Circe wasn't the witch as Greek mythology recalls? Her story is expertly crafted by Miller, who could probably write an intriguing novel about watching grass grow.

Read this for the story, love it for the writing. Bravo I know for sure that Oprah Winfrey is a spiritual life guru who has figured out more than a few passing sentiments on her journey.

A collection of articles over the years from O magazine, What I Know For Sure encompasses the wisdom of a life well-lived. I understand now why my mom and so many others follow this woman to the point of obsession. Oprah is not famous because she had a talk show - she is renowned for her observation and spirit. I highly recommend this as an audiobook, it was my daily commute for a week and I started the day much happier. First Impression: I want to fall into that cover <3

World Building: A future where losing the memory of the past will impact present reality. The idea of losing one's shadow, and the repercussions thereafter are bought to fruition in an original concept piece.

Writing Style: I'm now a fan of Shepherd, who understands how to hold suspense while satisfying curiosity. Timely and full of heart.

What I Enjoyed: The characters, their relationships, and their journey! The magic and mythology weaved with a post-apocalyptic future brought intrigue to every chapter.

Overall Rating: 5 stars - I adored everything about this book. What I Enjoyed: Townsend writes to delight, weaving a cleverly imagined world through ink on a page. My greatest admiration for such a craft. Don't be fooled that it's for children - you'll be in Wunder all the same.

Improvements: The middle gets a bit convenient and frustrating, setting up for a climax of course. I would like to see more balance as the series continues, but oh what a thrill in the last third! 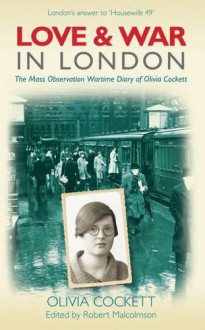 "LOVE AND WAR IN LONDON: The Mass Observation Wartime Diary of Olivia Cockett" is a fascinating story about a remarkable woman who provides an interesting view of the home front in Great Britain between 1939 and 1942.

The Mass Observation (MO) Program began in Britain in the late 1930s in which members of the general public were invited to record their experiences and thoughts in diary form and share their diaries (via regular installments sent by post) with MO. The MO program, in turn, would solicit its members during the Second World War with questionnaires, seeking their views of the war, their changing or altered lifestyles because of the war, and the kind of postwar Britain they would like to see. These diaries and questionnaires are now part of the MO archives in Sussex, England.

The format of this book gives the reader ready access into the life of Olivia Cockett - who was working for New Scotland Yard when the war began in September 1939. She had, at this point, been a government employee for about 10 years. She was almost 27 years old, living with her parents, and in a relationship with a married man who was 17 years her senior (Bill Hole). In their case, the passion Olivia and Bill had for each other began the moment they first laid eyes on each other several years earlier. It was a POWERFUL AND IMMEDIATE sexual and emotional attraction they felt towards each other. As one can well imagine, it wasn't easy for them to arrange meetings.

As someone who keeps a diary himself, I was utterly fascinated with this book. Olivia Cockett was a woman who knew her own mind and was unafraid to speak plainly and truthfully about her own feelings and beliefs. [There are photos in the book of Olivia, Bill Hole, and of her neighborhood in wartime London.]

For anyone interested in understanding the home front aspect of everyday life during the Second World War, I highly recommend "Love and War in London." Besides, when you read a book like this, the past does not seem remote or dead. But living, vital, and real, knowing that Olivia Cockett and the people with whom she worked, associated, and lived were as alive and experiencing the joys and stresses of life as we now are --- albeit in an era very different than today.