Log in with Facebook
or
Wrong email address or username
Sign up
Already on BookLikes? Log in!
Incorrect verification code
Please, check your email, the code to access your BookLikes blog was sent to you already.
Enter code:
« Back Send
back to top
Search tags: One-Snowy-Night 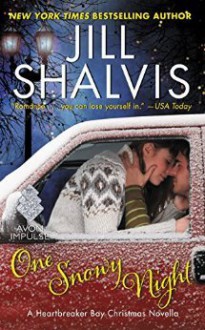 One Snowy Night is an outstanding holiday romance by Jill Shalvis. This is a fairly quick read, perfect for those with limited reading time. Ms. Shalvis has produced a book that is well-written and populated with fantastic, lovable characters. Rory has promised to be home for Christmas. Max is going to the same area and Rory's boss asked him to give Rory a ride home. Max and Rory's story is loaded with drama, laugh out loud humor and spice. I loved this book from start to finish and look forward to my next book by Jill Shalvis. One Snowy Night is book 2.5 of the Heartbreaker Bay Series but can be read as a standalone. This is a complete book, not a cliff-hanger. ~ reviewing the audio version~
Exactly what I was looking for. Cute, fun novella filled with sexual tension with a tiny, bit of spice thrown in. Rory and Max had been sort of antagonizing each other for a long time up until they are forced to share a ride back home. Trouble arises in the way and fortunately for them, that gives them time to sort things out and get things right. Everything wrapped up too fast but the ending was still satisfying. I definitely recommend if you're looking for a Christmasy, quick read.