Log in with Facebook
or
Wrong email address or username
Sign up
Already on BookLikes? Log in!
Incorrect verification code
Please, check your email, the code to access your BookLikes blog was sent to you already.
Enter code:
« Back Send
back to top
Search tags: Otherness 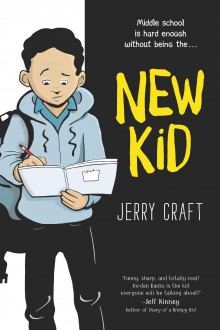 New Kid by Jerry Craft is a middle grade graphic novel that tells the story of a boy named Jordan who has (against his will) been enrolled in a prestigious private school in the upscale (and predominantly white) neighborhood of Riverdale. While he didn't necessarily feel like he fit in among his peers at his old school in Washington Heights he really feels like the outsider at this school being one of only 3 students of color. (There's a lot of mixing up of names by the teachers + bullying by peers.) In classic 'rebellious preteen' fashion he feels that the world (i.e. good ol' mom) is set on ruining his life because she won't let him go to art school instead of this place where it seems like everyone is either rich, white, or both. To help him sort through his frustrations and rage he takes to working on a sketchbook detailing his experiences. [A/N:These comics are interspersed throughout the book.] New Kid is a coming of age story about classism, racism, and finding out where you truly belong.

Honesty compels me to tell you that I didn't necessarily love this book because of its predictability and slow moving pace. However, this book wasn't written with me in mind as its audience and therefore I think for the young person who is feeling 'other' and beaten down by circumstances out of their control this could be quite an important book. I liked the illustrative style particularly how it worked so well with the sprinkling of Jordan's comics with their very different artistic approach so no complaints on that front. For me it's a 4/10 but in terms of readability for that audience I'd say 8/10.

What's Up Next: Remember? Remember? by Charles Beaumont 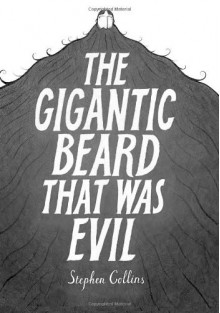 The Gigantic Beard That Was Evil by Stephen Collins is a beautifully illustrated graphic novel that I think everyone should read. It follows the story of Dave who loves drawing what's outside of his window and listening to his favorite song 'Eternal Flame' on repeat. (He's a real fun guy.) He lives on an island called Here where everyone and everything is neat, tidy, and absolutely normal. Dave may be just as clean shaven (except for that one unruly chin hair) and orderly but that all changes when his one little hair morphs into an out-of-control beard. There's one thing that unites all the citizens of Here (besides their fastidiousness) and that's their fear of There. When Dave's beard threatens the carefully arranged status quo of Here the citizens and the government decide something needs to be done. This book discusses what it means to be different, the ways in which society ostracizes and vilifies the elusive 'other', and how fear of that 'other' can shape a community. The artwork alone would make this book one of my absolute favorites but the storyline combined with it shoots it right to the top of the list. It's phenomenal. 10/10 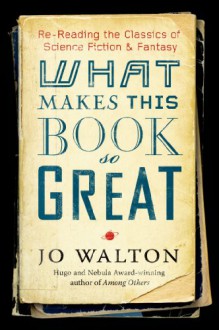 I've been reading SF for more than 30 years.

I've probably read everything worth reading in the field, and I’ve been always intrigued by the two questions:

1 - What makes a SF book a good example of its kind?

2 - Why is SF relished by practiced readers, while others hate it?

Walton's book tries to answer the above-mentioned questions. Walton is clearly a SF devotee (on top of being a SF writer as well, which I've never read in fiction mode by the way).

One crucial factor is that SF is written in a kind of code, which must be learned by apprenticeship. This necessity, of course, intensifies the skeptic's bewilderment at the bother taken by those who learn it in the first place. I learned all of the SF narrative codes when I was very young.

SF reading is like learning a language, ie, the younger we are, the better we'll be prepared to fully appreciate it. If one tries to start reading SF later in life, it's almost always a hit or miss situation. Most of the time, it's a miss. For those readers for which it’s a miss, it usually means they lack proper “tools” to able to fully engage with the text.

In this book, Walton does not try to attempt a deep and rigorous approach to SF criticism (vide her last essay in the book “Literary criticism vs talking about books”; two other essays worth reading are “Why I re-read” and “Do you skim”). What she aims to accomplish is a way to give us a particular take on some very distinct works in the SF field. Most of the time I don't agree with her (eg, her analysis of the Vorkosigan saga by Lois McMaster Bujold, which Walton elevates to Nirvana status, but that I particularly hate; that's for another occasion; on the other hand, her deep reading is spot on in some cases: eg, “Icehenge” by Kim Stanley Robinson: “He reads Cavafy, but he breathes T. S. Eliot”, making an intertextual comparison between both works).

Speaking for myself, when I embark on a SF text, what I look for is estrangement, ie, the ability to search that ethereal quality of transcendence. It goes without saying that the ability to provoke transcendence is not exclusive to SF. The function of estrangement in SF is not identical with the kinds found in certain other narrative texts (eg, mainstream/mimetic literature). For example, we can value History for its ability to give us estrangement of other ancient times and what they can tell us about the present, ie, History is interesting for its alterity. Unfortunately History, no matter how imaginatively depicted, cannot go beyond its own limits. Only SF can/may enter into the truly other (vide novel "Stars in My Pocket Like Grains of Sand" by Samuel Delany, which Walton also “analyses”, for a wonderful example of this; it's also one of her best essays in the book).

What seemed really strange in this book was the absence of negative reviews/opinions. For someone as well-read as Walton, it’s weird. Only a handful of essays contain mild and en passant “negative” opinions (eg, “The Mars trilogy” by Kim Stanley Robinson, James Tiptree Jr’s biography by Julie Phillips).

Bottom-line 1: I read SF for the meta-reading it allows me. It’s an endless journey…

Bottom-Line 2: After finishing it, I felt like (re-)reading some of the referenced novels (eg, “Tam Lin” by Pamela Dean, which I’ve never read; “Neuromancer” by William Gibson, which I’ve read multiple times, “Anathem” by Neal Stephenson, ditto, “Biting the Sun” by Tanith Lee, “Stars in My Pocket Like Grains of Sand” by Samuel Delany, “China Mountain Zhang” by Maureen F. McHugh, which I’ve read late last year, and in my opinion it’s one of the best (SF or not) novels ever written – vide review here).

Off-topic: I was thinking of doing a particular post about this, but I won’t bother. Here it goes. I’ve been receiving emails to clarify what I mean by “speculative fiction”; this was first used by Heinlein, and it’s a broader term that comprises everything an author is able to create, ie, where anything can happen. It’s a place beyond reality, a place that could have been, or might have been, if only the rules of the universe were altered. “Speculative fiction” goes beyond the mundane and takes me into a world of might-have-been, science, intertextuality, transcendence, otherness, estrangement, etc. It’s a world where I leave part of myself behind when I return to the universe as I know it. It pushes the limits of the imagination. A good SF story makes me think, and also provides a new insight into human nature or even give me a new outlook on life. It’s a tall order I know, but that’s what I always aim for in a good SF book. Even if after reading this, you still have doubts about what SF is (or isn’t), I’ll give you a clue: It’s not about magic swords, spaceships, robots, dwarfs, leprechauns, pixies, elves, and the like. SF allow us to see the world with new eyes. SF is about you and me. 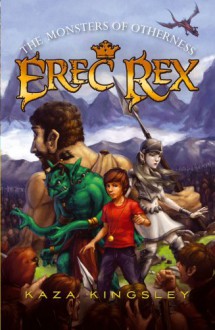 The second book about Erec Rex, and I think I might even like this a tad more than the first book. The first book tired to introduce too much of a new universe too quickly, which made the start rather cluttered. This sequel didn't suffer from that issue, meaning that the plot was a lot cleaner and got started much faster.Of course the story is rather predictable, but it's well-written and fun! I like the main characters, and loved hearing about the tasks Erec had to fulfill in order to become a king -- even if he did only manage the first 2 in this book. I'm already looking forward to reading the next!
Like Reblog Comment 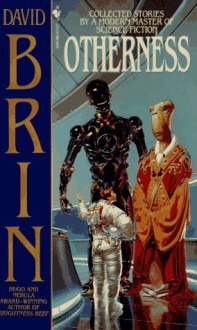