Log in with Facebook
or
Wrong email address or username
Sign up
Already on BookLikes? Log in!
Incorrect verification code
Please, check your email, the code to access your BookLikes blog was sent to you already.
Enter code:
« Back Send
back to top
Search tags: Plays-I-plan-to-attend 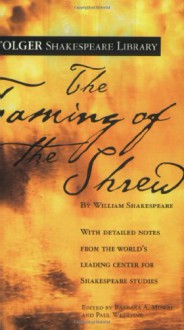 The Taming of the Shrew has to be one of the most difficult of Shakespeare’s plays for a modern woman to appreciate. I don’t know about you, but I found it difficult to watch an independent young woman being “tamed” into a Stepford wife.

I went to the cinema to see a version filmed at Stratford, Ontario (Canada’s Shakespeare capitol) and I have to say that they did it extremely well. The drunken tinker at the beginning of the play became a drunken blogger, being belligerent in the audience.  The music & humour began immediately and continued throughout the play.  I haven’t laughed out loud so many times in a theatre in a long, long time.  Plus, during the intermission, there was a “behind the scenes” tour of Stratford—all the prop and costume workshops which I’m sure the regular festival attendee doesn’t regularly get to see.  Good stuff!

This is a very physically demanding play. I really admired the energy that Ben Carlson (Petrucchio) and Deborah Hay (Kate) put into the roles.  Ms. Hay especially had a lot of roaring, flouncing, and flailing to do and seemed to be having a really good time letting it rip!  An interview (also during intermission) reveals that the two are a real-life couple and were able to bring their own chemistry to the performance.  Hay acknowledged that becoming the extremely subservient wife was a difficult part to play, but that she felt that Kate & Petrucchio have “an understanding” about how Kate will behave when they have an audience.  And she plays the “tamed Kate” role with an undertone of the possibility of the volcanic eruption of “shrewishness.”

Much of the humour came from the inflections and tone of voice of the actors, giving the archaic phrases modern meaning—and a few reworked bits of dialog that made the play more accessible for modern people. I think that Shakespeare himself would thoroughly approve of pleasing the audience and I found the changes to work well.

Although this will never be my favourite play, it was extremely well performed and a lot of fun. 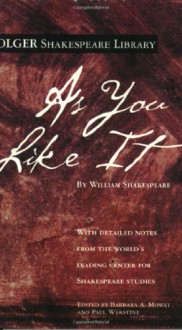 All the world's a stage,
And all the men and women merely players;
They have their exits and their entrances;
And one man in his time plays many parts,
His acts being seven ages.

I am always charmed when I go to see a Shakespearean play and hear familiar phrases. As You Like It certainly has its share of those.

A cinema chain near me offers showings of the National Theatre (London) on a regular basis and I went this week for my first experience of this play. As expected, I enjoyed it a great deal. The only issue was a slight falter in reception (and regrettably this was during the famous “All the world’s a stage” scene).

It has all the elements that say “Shakespeare” to me—mistaken identities, disguises & cross-dressing, instantaneous loves, and questions of loyalty.

The stage set for the Arden forest was extremely interesting—the forest itself was created from furniture suspended from the ceiling, which I know sounds weird but somehow it worked well. Watching the transformation of the stage to this arrangement prompted intake of breath among the audience. It was amazing to watch as things gradually swept up into place.

Also fabulous was the music and singing, which really enhanced the experience and which I wouldn’t even have realized I was missing, had I merely read the play at home. Truly, the plays are meant to be experienced, rather than simply read and this one was a great pleasure on so many levels. 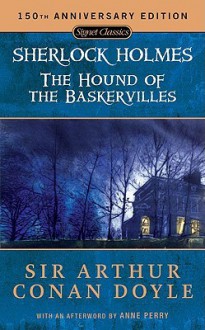 Holmes and Watson are faced with their most terrifying case yet. The legend of the devil-beast that haunts the moors around the Baskerville families home warns the descendants of that ancient clan never to venture out in those dark hours when the power of evil is exalted. Now, the most recent Baskerville, Sir Charles, is dead and the footprints of a giant hound have been found near his body. Will the new heir meet the same fate?

This was a re-read for me, but after many decades.  I had forgotten the charm of the Holmes stories and I’m glad to revisit one of my favourites.  I just attended a theatrical performance of The Hound of the Baskervilles last weekend and wanted to compare the production to the original.

The roots of the forensic mysteries that I enjoy today are on display in The Hound, as Mr. Holmes uses logic and investigative techniques to catch slippery criminals.  Conan Doyle was the great-grandfather of the genre, introducing components that we still expect in modern crime novels—an expert protagonist (medical examiner,

anthropologist, police detective), an attention to all kinds of details which can work as clues, and a side-kick or partner to create the conversations that allow the reader to know the thought processes that are crucial to solving the crime.

Because I had just seen the play, I’m not a good judge of whether there is still any sense of surprise when reading The Hound—I did enjoy the quality of the writing and the well-structured story, despite knowing the outcome.   Not as elaborate or wordy as many novels from the 19th century, The Hound also displays a more stripped-down language, showing the evolution towards the 21st century crime procedural novel.

Just saw a theatrical version of The Hound on Sunday and thought I would enjoy the book again.