Log in with Facebook
or
Wrong email address or username
Sign up
Already on BookLikes? Log in!
Incorrect verification code
Please, check your email, the code to access your BookLikes blog was sent to you already.
Enter code:
« Back Send
back to top
Search tags: Remembrance 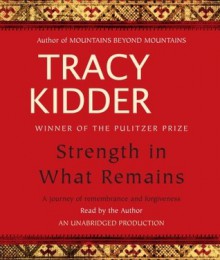 This is a readable but mediocre book that gets a lot of praise because it’s about an impressive person and a tragic topic. Deogratias grew up in rural Burundi with few advantages, but made it to medical school, until he got caught up in the genocide in Rwanda and Burundi in 1993. A friend helped him flee to New York City, where despite a job delivering groceries he found himself homeless at first, until making friends who helped him get back on his feet. He then went to college and medical school in the U.S., and returned to Burundi to set up clinics for people with no access to health care.

This book reminds me of Ashley’s War, in that both are about people and subjects that absolutely deserve a book, but their authors sell them short. Kidder’s writing feels superficial throughout. From early on I had the impression that he was drawn to Deo but never really understood him (or perhaps Deo wasn’t willing or able to open up to the extent an author would need to write a biography that appears to be based mostly on his own disclosures), and so was able to relate the facts but only on the surface level. This becomes even more apparent in the second half of the book, when Kidder accompanies Deo on one of his trips back to Burundi. They visit numerous memorials and sites from Deo’s past, and Kidder describes how Deo reacts, but in the end we get more of Kidder’s feelings about the trip than Deo’s.

Though this is primarily a biography, we do get some information about the genocide in Rwanda and Burundi as well, along with a brief overview of the countries’ history. Though, again, this feels superficial, it’s an adequate starting point and is interesting for a reader with relatively little knowledge of the area. Especially interesting is Deo’s theory that the genocide was made possible in large part by structural violence – that when everyday life is full of fatal illness and injury, hunger, violence at home and at school, and little opportunity to improve one’s lot in life, people perceive the value of their own lives as low and therefore value others’ even less. Also interesting is the fact that, although westerners reading about the genocide assume Hutu and Tutsi are clearly definable ethnic groups, the reality seems to be anything but; these are apparently social groups more than anything else, and it appears Deo isn’t alone in being unable to tell the difference.

At any rate, this is a very readable book, not a bad choice for those who are interested in the topic. (It’s also worth pointing out, for those unsure about whether they can handle a book about genocide, that only one 35-page chapter is all about that; most of the book is about Deo’s life before and after, and about Kidder spending time with Deo and the people who helped him in New York.) But I’m underwhelmed by Kidder’s writing and likely won’t recommend this to others. 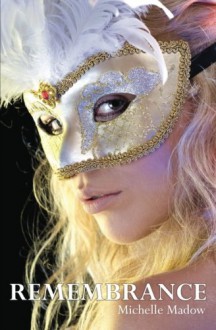 4.5 Stars
Remembrance is a story about reincarnation and true love. Elizabeth lives in a small town. She has a perfect boyfriend, Jeremy, everyone things that they are destined to be forever together. Her best friend Chelsea believes that too. Only Lizzie isn't so sure, as much as she likes Jeremy she can't imagine being with him in the long term. He is more interested in his sports than her. Lately their relationship hasn't been the same and Lizzie isn't sure how long she can be with him.

Drew is another reason why Lizzie feels like breaking up with Jeremy. Since the day she met him, she hasn't been able to stop thinking about him. For some reason it feels like she knows him. As if they have met before, and they belong with each other. At first she tries to ignore all this. Meanwhile Drew starts dating her best friend. But soon it all becomes too much to take quietly. She must find out why she is attracted to him and also if he feels the same way or not.

Drew tries his best to stay away from Lizzie. He knows nothing good will come out if they started dating. Whenever they are together things end badly. But he can't deny the fact that they belong together. May be this is their second chance, may be this time things will not end in tragedy. May be...

I liked this story and loved the characters. They're typical high school students worried about things like grades, friends, and love. Lizzie and Drew have great chemistry. I loved the romance between them. Story is very well-written. All in all it was worth the read.
Like Reblog Comment 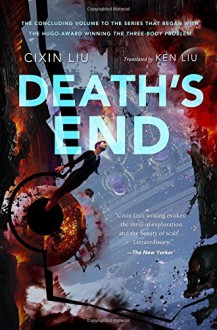 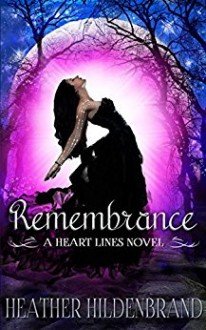 Remembrance by Heather Hildenbrand is a unique and entertaining start to the Heart Lines series.  Two years before the story began; Samantha Knight underwent a trauma that caused her to lose her memory.  She is no longer the outgoing individual she used to be.  Instead, she is paranoid and scared.  Supernatural hunter, Alex Channing, is slowly dying after being bitten by a werewolf.  His sole hope is for a cure that only Samantha could give him, if she could remember.  This contemporary PNR takes place in California.  It is suitable for New Adults.

Heather Hildenbrand did a wonderful job writing this book.  The character development was skillfully crafted.  I could sense Sam’s frustration at not remembering what happened to her.  You felt her confusion.  She discovers significant things about herself and what transpired to her throughout the story.  Alex has a secret and is harboring a lot of guilt.  He is a worthy hero who is brave, determined, and protective.  I enjoyed both main characters; they are multi-dimensional and complex.

REMEMBRANCE was mysterious and full of twists.  The plot was well-executed.  REMEMBRANCE moves quickly and is thought-provoking.  There are occurrences in the story that are eye-opening.  The ending left me anxiously awaiting the next book from the series.  I voluntarily reviewed an advance reader copy of this book.