Log in with Facebook
or
Wrong email address or username
Sign up
Already on BookLikes? Log in!
Incorrect verification code
Please, check your email, the code to access your BookLikes blog was sent to you already.
Enter code:
« Back Send
back to top
Search tags: Sarah-Benwell 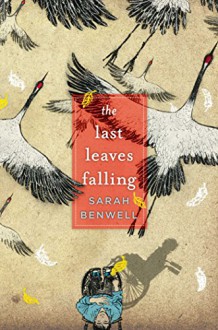 My god, this book is so beautiful and depressing, more so than most books I've read in my life. Don't read this if you're feeling down.
It's a story of a teenage boy who's been diagnosed with ALS, a degenerative disease with no cure with only 2 years to live. As the book progresses, his disease slowly progresses, and...the ending, shit it just killed me, I feel so messed up reading this and it was done so well.
There's quite a few mentions to depression and suicide and clinical illnesses. Really powerful. 5/5

A teen book about ALS and I can't help but compare this to Me Before You (while not the same topic persay but it holds a similar stance - at least to me) which I ADORED. And The Last Leaves Falling just doesn't hold any emotional beat for me. I just can't find myself to continue reading this one. It does some good things, diversity, a new topic explored for teens. So I do think it is an important novel but not for me. Will definitely keep it in mind for readers advisory.

This book is amazing. It was such a peaceful and fulfilling read. I wish I could just write my review with a blank page with floating butterflies, kind words fleeting across the page and Louis Armstrong singing What a Wonderful World (one of my favorite songs) in the background. Why? Because in the story, Abe is alone, he has nothing until he reaches out on the internet and connects to some of his peers. Hesitant to meet with these peers, they react just like he thought they would when they do meet up yet later when the initial shock wears off, they reconnect and they built a solid relationship. They see something in each other, it’s real, a real friendship where no one expects anything from each other, they just want to be with each other and enjoy their time together. What made this so story so special is that Abe has Lou Gehrig’s disease and he’s 17. Abe’s aging fast, his disease is progressing faster than the doctor’s thought. He’s still a person, a person capable of doing things; it’s just his body that is giving out on him. Appreciate life, appreciate what you’re capable of doing, appreciate your friends and family, appreciate…..appreciate….

“And I think to myself, what a wonderful world”

(I have this link on my ipad)

If you hadn't heard about Amyotrophic lateral sclerosis (ALS) before last summer, you'll probably know it now thanks to all the attention that went into the Ice Bucket Challenge. It was of course only a matter of time before there would be books about it as well. And I thoroughly believe it's a good thing that awareness is created for this terrible disease (as there should be awareness for many more terrible diseases).

I really liked the setting, in Japan. It's always nice to read about a different culture. I was not such a big fan of the chats that were included into the book, and I felt that the friendship that followed was rushed, especially in the beginning. Come to think about it, the whole book felt rushed. It wasn't a particularly long book, so I would have liked to perhaps see it a bit longer so that the events all felt better in place.

Although I thought it was an interesting story, I never truly connected with Sora or his friends. It didn't have the emotional wow-factor that I thought it would have. Perhaps my expectations were a bit too high...

Received this book from Netgalley in exchange for an honest review!

I didn't love the book, but I really liked it. This was in no way the fault of the characters or the story about ALS. It was however about other things.

For instance, the story takes place in Japan (at least I am guessing this since there are various stuff about Japan, references and all that), but I just don't feel that it is Japan. It feels like someone created a Japanese character, added some background stuff and then said, hey this should take place in Japan, but all the while it feels like this just takes place in America, or in another country that is not Japan. It was really conflicting and it dragged me away from the story quite a lot of times.

Another thing that I didn't totally like was the fact that the chapters were varying sizes. One time it would be one sentence, then a paragraph or one or two, then 5 pages. I really don't like it when this happens.

Sora was a great character and I really found him interesting. However I was also frustrated with him. I know life is tough and life sucks when you only have a few weeks? Months? Years? to live, but I wish he would open up, let people inside. And sure he does open up eventually, but he pushed away so many people, so many people who cared about him. And I wish he would just talk to people about his disease, talk about death, talk about stuff.

I did love the chat conversations and I found them really fun to read and also very interesting.

I also liked that we have a book about a teenager with ALS, it still relatively an unknown disease to younger people and I think that this book will be helping to make it more public, to make it more known. It is at least a better way to bring a disease out than by means of overhyped media attention in the form of donations and ice buckets.

And yes, it was heartbreaking, we meet with Sora when he is already far in the disease, he is already in a wheelchair. As the story progresses you see him fall apart, see his legs fail completely, see him fail with typing, it is really sad and I was just hoping for a miracle, even though I know there is no cure, no ways to help them but make sure they are happy and comfortable.

Next to the ALS part of Sora, we also have the problems that Mai is going through, Mai wants to draw, be an artist, yet her mother wants her to go to Yale and all the other fancy stuff and get high grades. Then we have Kaito who is learning to code and making websites.
Then we also have the whole Suicide mails/suicide cult thing that is running about.

His friends Mai and Kaito, I loved them, they were wonderful friends and I am happy to see Sora to have friends, friends who care about him, don't mind him being sick, instead care for him and cheering for him.

The ending? Sorry, I didn't like it at all. Actually I pretty much hated it and it is one thing I will deduce stars from. I won't say anything else, just that I am disappointed and that I wish there was more to the ending than what it was now.

All in all though it was an interesting book, not always good, sometimes boring, but most of the time very heartbreaking.