Log in with Facebook
or
Wrong email address or username
Sign up
Already on BookLikes? Log in!
Incorrect verification code
Please, check your email, the code to access your BookLikes blog was sent to you already.
Enter code:
« Back Send
back to top
Search tags: Secret-Adversary So I take it this is Christie’s second novel and her first attempt at writing an espionage-based plot, and great googly moogly, am I ever so glad she stuck mainly with murder mysteries after this. Don’t get me wrong! I really enjoyed The Secret Adversary. Tommy and Tuppence are a hoot! I loved their constant back-and-forth banter. But Christie’s ability to craft intricate, meticulously detailed murder plots doesn’t translate at all to spy adventures. The book strongly reminded me of one of my favorite Bill Murray movies, The Man Who Knew Too Little, only Tommy and Tuppence know they aren’t LARPing. It’s basically Espionage for Dummies, and it’s hilarious. I was listening to the Agatha Christie Close Up CD while adding covers to some of the books imported by MbD earlier this afternoon -- and guess what I discovered?  Penguin Random House is publishing a new series of Christie editions under the Vintage imprint!  And very pretty covers they have, as well ... 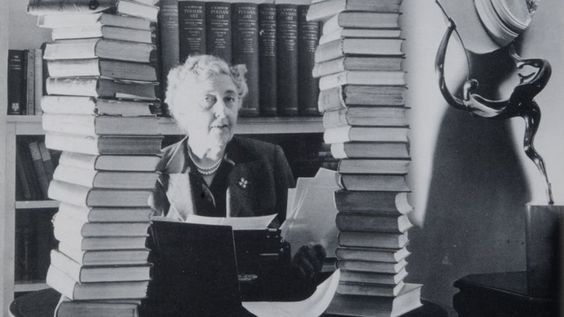 Published in 1922, The Secret Adversary was Christie’s second novel, coming directly on the heels of The Mysterious Affair At Styles, her first Poirot outing which was published in 1920. For the first decade or so of Christie’s career she dabbled heavily in the thriller/espionage genre, publishing The Man in the Brown Suit, The Secret of Chimneys, The Seven Dials Mystery and The Big Four, all of which deal with international crime gangs and conspiracies with varying levels of competence and success. After the 1929 publication of The Big Four (which is nominally a Poirot, the plot of which, however, deals less with garden variety murder than with a strange, Austin Powers-esque international crime conspiracy), her publisher must have convinced her to abandon her not wholly convincing thriller career in favor of writing whodunnits, because she doesn’t write another international spy thriller until the second Tommy and Tuppence novel was published in 1941.

I am of mixed emotions about this because I find her early thrillers (with the exception of The Big Four, which was absolutely terrible) to be weirdly charming in their innocence about the incompetence of the political criminal/international criminal mastermind. The Secret Adversary definitely falls into the category of charming and innocent. The basic plot is whisper thin (literally – it’s based on Tommy overhearing two people whispering about a woman named Jane Finn) and is generally about the possession of some government documents by a young woman (with amnesia. Yes, really) and an international crime syndicate who want to get a hold of those documents in order to foment revolution in England. If this doesn’t make any sense to you, that’s because it doesn’t actually make any sense. Tommy and Tuppence are two broke Bright Young Things who decide that the best way for them to come into possession of a few pounds is to place an ad in the newspaper, to try to hire themselves out as adventurers.

It’s preposterous and in the real world (or in modern fiction, which goes for verisimilitude) they’d have been dead within about 25 pages, and the rest of the book would’ve been spent with the professionals attempting to figure out why these two charming young people ended up murdered by terrorists. That’s not how this one goes, though. It feels like such an innocent world in The Secret Adversary (and in The Secret of Chimneys as well). I can only wonder if this was simply a reaction to the trauma that WWI inflicted on the British people, and surmise that, perhaps, what they really needed was to believe that a pair of children, with very little money, a great deal of sparkling wit and a fetching hat could, in fact, save the world. Because there is nothing even remotely convincing or realistic about this plot, but somehow, it’s impossible to care because it is all so delightful.

This was my first time reading The Secret Adversary, and I doubt that it will become one of my favorites although I thoroughly enjoyed it. I went into it convinced that Tommy and Tuppence were lifted wholesale from Dashiell Hammett’s Nick and Nora Charles – imagine my surprise when I actually looked it up and learned that T & T predated N & N by a dozen years. I should’ve known better, though – The Queen sets trends, she doesn’t follow them.

I'm sorry, but did Mr. Herscheimmer just seriously suggest re-enacting the sinking of  The Lusitania in an effort to cure someone of amnesia?

So, first of all, the edition that is attached to this post is not the edition I am reading. Mine was a freebie that I picked up on amazon, which is published by some unknown random ebook publisher. The oddest thing about it is that it bills itself as "illustrated," but the illustrations have NO RELATIONSHIP WHATSOEVER to the text. One of them is a picture of a snowy river. There is no snowy river in this book. It's freaking bizarre. Moving on, though - this is basically The Seven Dials Mystery, with the Bill Eversleigh character represented by Tommy and Bundle Brent represented by Tuppence, right down to Tommy hiding out while the members of the international crime syndicate, who are only identified by numbers (instead of times), meet in secret. It is an entertaining romp, but it is thin indeed on substance and plot.