Log in with Facebook
or
Wrong email address or username
Sign up
Already on BookLikes? Log in!
Incorrect verification code
Please, check your email, the code to access your BookLikes blog was sent to you already.
Enter code:
« Back Send
back to top
Search tags: Series-White-Hart 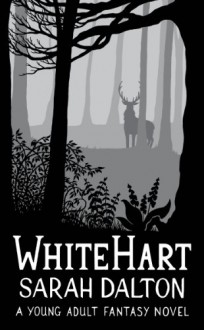 White Hart is a phenomenal story. There's magic, a prince, a haunted forest, and frightening creatures all waiting inside. I love that the hero of the story, and the one doing most of the saving, is a girl. Mae doesn't always think of herself as strong, but she's smart and resourceful when it's needed most. I loved her relationship with her stag, Anta. I'm always more attached to a character that has a good bond with a favorite animal.

Prince Casimir, on the other hand, was not what I would call your typical fantasy prince. He wasn't the amazing good hero saving the day, but he also wasn't the evil prince out to destroy the world. He just...was. The only thing he really seemed to have a strong opinion on was that he had to marry the craft-born girl - who he believes to be Ellen.

Much of this story takes place in the Waerg Woods. It's full of creatures - some I had heard of and some I hadn't, but all had a very unique twist. I absolutely loved the birds!!! They had the perfect creepy factor going for them. The groups of people they encounter in the woods are also very diverse and really help to push Mae along her emotional journey.

This story had plenty of action and was a very quick read. It does end with one heck of a cliffhanger though and I don't see a release date for book two yet.

ARC provided by the author through Netgalley
Mae and her father gather wood from the edge of the Waerg Woods. Poor, dark-skinned, and supposedly tainted by the woods' curse, they live as pariahs in Halts-Walden.
Mae is the craft-born, the one whose nature-connected magic can revive the kingdom - only Mae has to try her hardest to keep her powers secret, for the King has decreed that the craft-born shall marry his son, Prince Casimir.
It seems Mae is in luck: Ellen, the miller's daughter, pretends to be the craft-born and the Prince is coming to get her.
While venturing into the Waerg Woods with the Prince, to convince him not to hunt her white stag Anta, Wanderers from the Waerg Woods come into Halts-Walden to steal Ellen, whom they believe to be the craft-born, and end up killing Mae's father in the struggle.
This is an odd book to rate, and I struggled with it for quite some time.
As a YA book it's mediocre. However, once I chose to read it as Middle-Grade, it's quite good.
It's an entertaining fairytale-like story, but the characters' dialogue and actions, the very descriptions and world building, only work if it's read as MG. It's perfectly fine and reminiscent, in fact, of classical fairytales in its simplicity: this is the heroine, the heroine does this for straight-forward simple reason, heroine announces her thought-processes, we're told a lot because the audience is not meant to have the ability to analyse things in depth.
This may sound critical, but I'm not trying to be. I'm trying to point out how this is being marketed to the wrong audience. As a YA book it doesn't work. As a MG book it's pretty good.
So that rating is the balance of the two. If I were to rate this as YA, I would give it 2 stars, as MG I'd give it 4 stars, so here we are, at 3 stars.
There is a lot to recommend this book, chief of all the Waerg Woods. They are well written and creepy in a sort of la Motte-Fouqué way (for those of you who've read his Undine). The Waerg Woods are divided in sections, each harbouring a new evil: malevolent black birds that swoop into the sky and form clouds that pour down burning rain, a creature that attacks by preying on your fears, deadly cold fog that tries to lure you to a sleepy death, clinging vines that attempt to drain you of your blood.
This book is worth reading for the Waerg Woods alone.
However, there are also good things about the characters - if one reads them as MG, Mae goes from a whiny, arrogant, impetuous and tstl YA-type adolescent, to a young girl who doesn't know better and goes through the usual fairy tale tropes to learn valuable lessons. It's also nice that she never wanted to be Queen and wanted only to live close to nature, being true to herself.
One thing I can't help pointing out, be it YA or MG, is that if you're placing your story in a fantasy realm with a Medieval or Renaissance feel to it, do NOT use the word "okay" in dialogue! It's really, really absurd.
But quibbles aside, I really want to read the next one!
So, in conclusion, if you plan to read this as MG, I recommend it!
Sarah Dalton's official site
Buy White Hart
@ The Book Depository (with free worldwide delivery!)

I received a free copy from the publisher via Netgalley in exchange for an honest review. Thank you!

I really liked the cover, it is simple yet effective, because people do judge a book on it's cover (at least if they don't know anything else about it).

Mae is -secretly- the craftborn, the one person in the realm who has the ability to restore magic to its former glory (and will marry the crown prince). Mae is a poor girl, ignored by everyone in the village except her dad. (Her mother is -surprisingly- dead). When another girl from her tiny, tiny village is found to be the craftborn, the prince himself comes to collect her, but before that can actually happen, terrible thing happen.

To avenge her father and save the 'craftborn', Mae and the prince (please recall, she is a very poor girl who's never had the chance to train social skills) go - on their own - on a quest in the haunted magical forest 'The Waerg Woods'...

OK, I couldn't stand Mae. She is - as I mentioned before - very poor, though she acts more arrogant and spoilt than Casimir, who's the Crown prince! That doesn't make a lot of sense, especially when Mae keeps saying how spoilt Casimir is and everything. One of her better qualities is saving Casimir, because, hell, he needs a lot of saving! (Don't let him wander alone for more than two minutes).

She's also far too proud. There are multiple occasions where her being the craftborn could have easily saved the two of them, but she is too proud to use it because he laughed at her. Silly girl!

And if she hates Ellen that much, why would she not just expose her to the world? Why go and do this kind of theatre, with the blood in a bottle and all that? Why?!

Onto the world. We don't get to know too much about it. What I wondered though, it is probably changed in the final version of this book (I haven't been able to check), but there is a great inconsistency in the name of the realm. Aegunlund is most common, but there's also Agenlund and Aegunland?

The Waerg Woods are haunted and creepy. Or so we're told. No one dares enter except - of course - Mae. The woods reminded my of the clock-arena in Catching Fire. It's divided into little parts, each of which have special threats for you. (Think fog, rain, animals etc). There's also a clicking monster, who's apparently not bound by any boundaries.

The story is not that original. It's a series of getting caught, escape, getting caught, escape etc. A lot happens very fast, so there isn't really time for a lot of details, background story or real character development. Mae doesn't learn to be less arrogant, either. Some of her decisions seem so weird to me, that it was hard for me to see them as part of the story rather than being a plot device to come to the end of the story. Which isn't really an ending! It just starts to get excited from this point, I believe. I don't mind reading trilogies and I don't need full closure at the end of a book, but this seems just like it ended somewhere halfway, with an enormous cliffhanger...