Log in with Facebook
or
Wrong email address or username
Sign up
Already on BookLikes? Log in!
Incorrect verification code
Please, check your email, the code to access your BookLikes blog was sent to you already.
Enter code:
« Back Send
back to top
Search tags: Shifting-Shadows:-Stories-from-the-World-of-Mercy 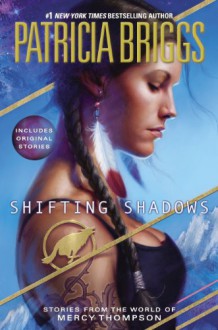 I DNF the 1st short story, SILVER and after moving to the next one, FAIRY GIFTS I can not get in the mood to listen to this audio for some reason. I'm going to set it aside for now and try it another day.

There are stories left to read, but I think it's safe to give this book a 4 star rating. My library loan has ended and it's time to get back in the queue.

"Silver" - 4 Stars
(This story can stand-alone. For Samuel & Arianna's happy ending, you must read Silver Borne.)

"She contemplated another True Name she had not let escape: Samuel Silverheart. She was named for the metal--Ariana and silver were not always the same. But she feared that the name meant what it sounded like; she could not love a wolf."

This story does not have a happy ending. It is not as sad as I thought it would be; it ends on a hopeful not. "Silver" is a little bit of an origin story (for Bran and Samuel) and a star-crossed love story.

If you have not read the series you need to know that Samuel thought Mercy, a coyote shapeshifter and heroine of the Mercy Thompson series, was the key to his happiness. Mercy's appeal is personality and her ability to have children, which Samuel craves, but female werewolves can't bear. Through many books he meddles in Mercy's life. Then, Poof! His happiness (conveniently) arrives in Silver Borne. Finally, Ariana and Samuel's history and relationship is explained. It's fitting and not as tragic as I thought it would be. "Silver" is about meeting the right person at the wrong time. You also get to see Bran as a human and what he was capable of before he became the Marrok.

[Notes to self: I may need to purchase this book for my Keeper shelf. Also, my library loan ends soon.]

The hope that she wasn't actually talking to the Marrok helped steady her. Even Leo was afraid of the Marrok. She didn't bother to answer his question--he already knew the answer. "I called to talk to the Marrok, but maybe you could help me."

There was a pause, then Bran said, a little regretfully, "I am the Marrok, child."

This short story is the beginning in the Alpha & Omega series. I made the mistake of starting with Cry Wolf and felt dropped into the book too soon; although, it was immerse myself into once I felt oriented. In "Alpha & Omega," Anna is within an abusive pack. She doesn't reach out to the Marrok to save herself, but out of concern for another. Bran sends Charles to investigate and leads into the misdeeds of one dysfunctional pack. Anna and Charles' beginning isn't pretty, but it has a sweet undertone. I especially liked Anna's inner strength and ability to stand up to Bran's "pet killer."

"Why the rolling pin and not a knife?" he asked, his voice raspy with the need for action.

She looked at him for the first time since she'd seen his face on the stairs. "A knife wouldn't even slow him down, but bones take time to heal."

He like that. Who'd have thought he'd get turned on by a woman with a rolling pin?

[Please note: I am biased about this short story, having a deep love of the Alpha & Omega series. After this short, don't forget to read Cry Wolf, [book:Hunting Ground|5292853] Fair Game and the upcoming novel Dead Heat!]

"The Star of David" - 4 stars
This story should have been titled "Redemption" in my opinion. It's the story of a man changed into a werewolf, who returned ignorant to his family with devastating consequences. It's several decades later. The daughter he once horrified needs him. Forget "redemption! "The Forgiven" works better in my head.

"Hello, hello," she said. "How is my favorite evil monster who wants to die?"

This story revolves around a thirteen year old girl, Kara, turned into a werewolf and the reasons for certain werewolf laws. Asil, a recurring character, point-of-view dominates "Roses in Winter." There is hope for him yet, along with hints of a possible HEA.

"Redemption" - 4 Stars or B+
(This story contains spoilers in the Mercy Thompson series -best read after Frost Burned.)

Ben had hung a whiteboard on the outside of the cubicle wall next to the entrance of his lair. On it he had written: I know you are here. Wait silently, and I'll get to you as soon as I am able. If you speak before then, you will not find me helpful. On the floor just inside his cubicle was a mat with a pair of black footprints and "Wait here" painted on it.

Even though it's obvious what Ben's damage is we finally given his backstory. He's a foul-mouthed Brit with obvious severe anger issues, but his care of Mercy after one traumatic episode showed his character could be redeemed. In this short story, we see Ben take another step out of his darkness. While his backstory is not pretty - sensitive readers may not feel so sympathetic - Ben's story is surprisingly funny! Who knew he was an IT nerd?

This library loan was worth the wait. Ben shines. He rallies. His character moves forward. Office cubicles, wolf hearing, an obnoxious IT company guy (Ben), and company politics are too good for any UF reader to pass! I hope we see more of Ben in future Mercy Thompson books.

This collection of short stories from the world of Mercy Thompson was a delight. Most stories feature characters that played second fiddles in Mercy’s novels. A few stories introduce new characters, like Gray, a story about a vampire. A nice, honorable vampire. And a ghost. A charming story.

Several stories I read in other anthologies before and liked. Still love them: Seeing Eye and Alpha and Omega. Actually, Alpha and Omega started its own series, and for me, it’s the favorite of all the stories and novels from Mercy’s world. Other stories were new to me but talked about characters I encountered before.

The story I liked the least was Hollow, the only story in the collection featuring Mercy, the girl-shifter-coyote who started it all. As in all Mercy stories, she gets injured in this one. I’m tired of reading about Mercy being injured. That’s why I stopped buying her books at the novel #3, Iron Kissed. I read the rest of her series from the library, while I own all Anna and Charles books.

Overall, this book is one of the best short story collections in the UF genre. The pace is fast in every story, the writing beautiful, typically Briggs, and the characters all inspire my affection or at least respect. I want more of them.

Recommended to all fans of Patricia Briggs and anyone else who enjoys UF. You don’t need to read any of Mercy novels beforehand to appreciate this book.

I'm loving these stories, this author has won me over many times,but they end as soon as I get involved in them :^(  I am not a short story girl, I am greedy with gabby hands and want more, more, more.