Log in with Facebook
or
Wrong email address or username
Sign up
Already on BookLikes? Log in!
Incorrect verification code
Please, check your email, the code to access your BookLikes blog was sent to you already.
Enter code:
« Back Send
back to top
Search tags: Sickness 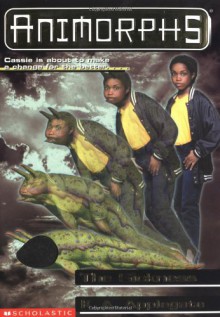 Not bad at all, especially for a ghost-written book. The real author is Melinda Metz of 'Roswell High' fame.

This book acts as a follow-up to 'The Departure'. Aftran, the Yeerk who was convinced by Cassie to seek out another path for the Yeerk species, has been accused of treason and will be interrogated by Visser Three within a few days. Cassie finds an unexpected Controller ally, but before the mission can go off there is a problem (of course!).

Ax comes down with a sickness that is in some way attached to morphing. He runs a high fever and is likely to die without brain surgery. The other Animorphs are susceptible to it, but, for reasons of convenience, the illness behaves like a normal flu virus.

Cassie has to carry out the impossible - rescue Altran or risk exposing themselves and the Yeerk Peace Movement, and save Ax's life with obviously no real surgical knowledge, let alone any Andalite physiology.

I'm not taking any points away, because I did like the book, but Erek and the Chee are also conveniently useless in times like these. They can project holograms, but they can't restrain an ill person from running out of their sick bed because of their programming?

This book also fares better when I think about what's coming.

During pregnancy special care is the utmost thing one should always keep ahead. The woman should know that these days are not that normal day it used to b earlier. Every food intake has a direct connection to the baby where the baby growth is purely dependent on the diet of the baby. Since during pregnancy, most of the food is restricted so the woman urges more towards fruits as they are the rich sources of the vitamins and essential nutrients which can be directly connected to the baby. Irrespective of some fruits she has an open gate to eat any fruit throughout her pregnancy. She used some fruits like oranges so that she can get rid of nausea and vomiting. Also, fruits can help her in curing with the strange morning sickness where she can grab some to get rid of these symptoms. Download Healtheoz HMom application and get qualified answers on diet, exercise and other points on pregnancy 24*7.

Morning sickness and insomnia are somethings which makes the pregnancy period very terrible. Morning sickness" is a misnomer. (In fact, the technical medical term is "nausea and vomiting of pregnancy.") For some pregnant women, the symptoms are worst in the morning and ease up over the course of the day, but they can strike at any time and, for most women, last all day long. The intensity of symptoms can vary from woman to woman, too.

Overall, this condition affects about three-quarters of pregnant women during the first trimester. About half of all pregnant women suffer from both nausea and vomiting, one quarter has nausea alone, and one quarter lucks out altogether. Nausea usually starts around 6 weeks of pregnancy, but it can begin as early as 4 weeks. It tends to get worse over the next month or so.

About half of the women who get nausea during pregnancy feel complete relief by about 14 weeks. For most of the rest, it takes another month or so for the queasiness to ease up, though it may return later and come and go throughout pregnancy. Unfortunately, for a small percentage of women symptoms persist continually (or nearly so) until delivery.

Of course, just because morning sickness is common – and likely to last "only" a few months – doesn't mean it's not a challenge. Even a mild case of nausea can wear you down, and bouts of round-the-clock nausea and vomiting can leave you exhausted and miserable. Talk with your caregiver about your symptoms and the possibilities for relief.

Pregnancy sickness is the most common medical condition of early pregnancy, but how bad it varies widely from woman to woman. You may get the odd bout of mild queasiness when you first wake up or find that certain smells trigger waves of nausea throughout the day. You may have to endure weeks or even months of feeling or being sick morning, noon and night.

The number of times one may vomit is dependent on one’s individual condition and health and as such, there is no such number which can be considered as normal or otherwise. The most severe form of pregnancy sickness is called hyperemesis gravidarum (literally "excessive vomiting in pregnancy"). If you are vomiting many times a day, are unable to eat and drink without vomiting, and if you are losing weight then you probably have hyperemesis. Unlike normal pregnancy sickness, hyperemesis can affect your health and that of your baby, so talk to your doctor or midwife as soon as you can help you. More than two-thirds of women will experience nausea and vomiting during the first trimester (Week 1 to week 12) of pregnancy. For the vast majority of these women, however, this nausea and vomiting, sometimes also referred to as “morning sickness,” will pass by the time the second trimester (week 13 to week 26 or months 4 to month 6) begins, never returning. However, nausea and vomiting returning during the second trimester are not entirely unheard of.

If you have had nausea and vomiting returning during the second trimester (month 4 to month 6), it is important that you try to find out what exactly is causing nausea and vomiting. Certainly, it is possible that it is just your morning sickness returning. However, morning sickness is, most experts believe, caused by the changing levels of hormones in your body that take place during pregnancy. By the time your second trimester rolls around, these hormone levels have typically begun to stabilize.

One possible cause for a return of nausea and vomiting during the second trimester is a condition known as hyperemesis gravidarum. Hyperemesis Gravidarum is a condition that sometimes afflicts pregnant women, and its symptoms include severe nausea and vomiting. Hyperemesis gravidarum is generally treated with changes in diet, rest, and sometimes antacids. In general, anti-nausea medications are to be avoided during pregnancy.

If your nausea and vomiting are not severe or prolonged, you may be able to treat them with a variety of natural methods. You might try some ginger extract supplements or ginger tea. You might make a point to avoid fatty or spicy foods. You should eat several small meals, to avoid becoming too hungry or too full during the day. Finally, you should avoid strong odors if possible, as the enhanced sense of smell that many pregnant women experience can be responsible for nausea and vomiting. Back to Solitary Summer, and to anybody who thinks this is just fluffy garden talk, I'd heartily recommend to read the section on the disastrous intersection of poverty, prejudice and ignorance in the village, particularly insofar as it concerned the children.

"There is a great wall of ignorance and prejudice dividing us from the people on our place, and in every effort to help them we knock against it and cannot move it any more than if it were actual stone. Like the parson on the subject of morals, I can talk till I am hoarse on the subject of health, without at any time producing the faintest impression. When things are very bad the doctor is brought, directions are given, medicines made up, and his orders, unless they happen to be approved of, are simply not carried out. Orders to wash a patient and open windows are never obeyed, because the whole village would rise up if, later on, the illness ended in death, and accuse the relatives of murder. "

No wonder Elizabeth's heart broke every time she went there -- especially knowing that any and all attempts at providing real help would be rejected out of deeply inbred prejudice, and being left with this conclusion:

"At least I had discovered Lotte and could help her a little, I thought, as I departed down the garden path between the rows of scarlet-runners; but the help that takes the form of jelly and iced drinks is not of a lasting nature, and I have but little sympathy with a benevolence that finds its highest expression in gifts of the kind. There have been women within my experience who went down into the grave accompanied by special pastoral encomiums, and whose claims to lady- bountifulness, on closer inquiry, rested solely on a foundation of jelly. Yet nothing in the world is easier than ordering jelly to be sent to the sick, except refraining from ordering it. What more, however, could I do for Lotte than this? I could not take her up in my arms and run away with her and nurse her back to health, for she would probably object to such a course as strongly as her mother; and later on, when she gets well again, she will go back to school, and grow coarse and bouncing and leathery like the others, affording the parson, in three or four years' time, a fresh occasion for grief over deadly sin."