Log in with Facebook
or
Wrong email address or username
Sign up
Already on BookLikes? Log in!
Incorrect verification code
Please, check your email, the code to access your BookLikes blog was sent to you already.
Enter code:
« Back Send
back to top
Search tags: Silent-Scream

There was a time I was really into detective stories. Either on television or in books. I never seemed to tire from them. Until there was a moment where I felt I wanted to diversify the reading, and found I'm not really reading a lot of them at this point.

Silent Scream was one of the few I wanted to give a try though. And it was a bit of a mixed bag. On the plus side, I didn't foresee the ending and was actually quite surprised with it. For me, this might be the single most important factor in detective stories. It is nice to be able to figure things out before the detective, but sometimes you just want to get a run for your money (even if it is a review copy and you're not actually spending money on it). However, I didn't really like the main character, D.I. Kim Stone, she was a bit the textbook troubles detective who doesn't work by the book but apparently is so good at what she does that nobody seems to care. I hope she will improve her habits, as I plan to read some more books in the series.

Dark Academia Square: The fictional Salem University only has the one accursed dorm, but it inspired 29 books of chills in the mid '90s.

The first of a teen thriller/horror series that completely missed my radar back in the day, but is a perfect fit for the season.

Jesse is excited to begin college and, as a freshman, was eligible to be a 'monitor' (RA?) of Nightingale Hall, the off-campus house where she and five other freshman will spend the year. Little does she know that it was a tragedy last spring, the suspicious death of a bright young coed, that meant only freshman who didn't know any better applied to live there.

The house is described as a three story brick house, with spacious formal rooms and a kitchen downstairs and bedrooms on the second floor. The third floor presumably housed the chaperone, who falls down the stairs early in the book and leaves our youngsters alone in the house for most of the semester.

It is not as diverse a group of students as I would have expected, but this was the '90s and only white kids were allowed into Salem University at the time apparently. Of the seven students we have our heroine Jesse who is pretty, but can't afford day-glo clothes like some people, the rich playboy with a beemer, the beautiful overachiever, the loner poet, the girl with the athletic scholarship who loves him, the almost-too-handsome Ian (no other character traits so I had to give him his name) and the nominal adult handyman who lives over the garage and takes night courses.

This had some fun nostalgic elements that reminded me a bit about college - the textbook bill though, urgh - and would have appealed to the young readers who could fantasize about their own "grown-up" college days to come.

As a bonus, 'Nightmare Hall', like early V.C. Andrews books, had die-cut covers that hinted at a cool frontispiece. Poor blonde Giselle lies face-down in her lavender bedroom, that day-glo yellow halter top couldn't save her. 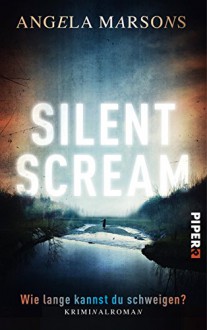 DI Kim Stone is called to a scene of a crime. A woman has been found murdered in a bathtub and the murder seems to be linked to a body that is discovered a little while later buried at a former children’s home. Kim Stone and her team must figure out who is behind the killing and why before more people die.

I had some trouble getting into the story, mostly because I felt a bit weary when the cops were introduced, they seem to be the usual bunch, a wish cracker, best friend, and the technical one (well surfing FB and finding clues in emails) and the gruff boss. Also, Kim Stone, the main character is a woman with a dark past in foster homes, she doesn't obey orders and has an attitude problem. And, Kim is one of my main problems with this book. The thing with orders and regulations is something that is there for everyone and every time she does something wrong in this book she is called in to see her boss, but she doesn't get suspended or taken off the case. I'm sorry, no matter how good you are as a cop. you have to obey orders. I'm having a hard time seeing how this would work in the real world. And then towards to end when she breaks into the former children’s home to look for something, All ALONE at night. Come on. She doesn't tell anyone and she goes by herself. There is a killer loose, but who cares, let's play recklessly.

Another thing that bothered me was how convenient everything was:

1. We have a former children’s home. Kim was a foster home child and has spent time in children's home.

2. There are two sisters in the story, they are twins. Kim was a twin.

So of course, this makes her the perfect cop to solve the crimes! Also, we have a killer that decided that Kim is the perfect adversary. That's new, never happens in books...

To the plus side. I had problems getting into the story, that's true, but it got better around 50% into the story. Things started to happen and the story got more intense. Also, I was totally blindsided when it came to the ending of the book. And, despite the fact that the cops felt a bit stereotypical. I did come to like them, including Kim. I just hope that next case hasn't any similarities with her life.

I am in awe of the central character and no doubt i am going to follow her to the end of the earth which in turn means i simply love the author and her penmanship. This book has so many things that is upholding it so elegantly.

It has a very strong, rock solid plot to begin with and then there is the fierce female character that is epitome of everything i love to see and read about, but would run thousand miles away from in real life.

That is nothing compared to how fantastically weaved the book in general is. As a warning let me tell you that the topic of the book is not very pleasant and has lots of graphics and gruesome details but then i can completely believe something of this nature happening in the very backyard of our houses.

The treatment of the thriller is so impeccable and fresh that you will enjoy reading and proceeding along with the characters in the book. Unlike other investigative thrillers, this does not go into magical solving mode but rather a practical and deduced approach and no wonder this book is currently enjoying a number best seller position in police procedural fiction category

The book is a superbly treated investigative thriller enhanced by a highly volatile and dynamic central character. This is a true thriller/investigative thriller which deals with a very gruesome case but at the same time provides you one of the best reads. Something in the book definitely draws you bad to it, that you want to finish it before getting up. The author has definitely stolen my literary heart.