Log in with Facebook
or
Wrong email address or username
Sign up
Already on BookLikes? Log in!
Incorrect verification code
Please, check your email, the code to access your BookLikes blog was sent to you already.
Enter code:
« Back Send
back to top
Search tags: Skulduggery-Pleasant I put off reading this last year because I didn't think I would like reading about a skeleton MC...Boy was I wrong! I love Skulduggery and his ragtag team of misfits! The characters are fun and surprising, action is exciting, and magic is...fun! I really enjoyed this one, and already have the next one on hold at the library! I think there were more charcter deaths in the previous book actually. But oh my god visions coming true, the Deathtouch Gauntlet, Darquesse constantly being here and there and everything just COMING TOGETHER oh my god.

The only thing is that the subplot with Danny was a bit pointless, but it was in the background.
Even Scapegrace got an important part to play!
The vampires, too! Just everyone!
Just so, so good, I mean I literally haven't loved a SP book this much since Deathbringer... Wow. Reading through this book has put me in a state of shock, and I...can't believe that a lot of things which happened, just happened. After the previous book, which was absolutely amazing with Armageddion and Darquesse and Lord Vile fighting side by side against some super-powered enemies, I couldn't see how Derek Landy could possibly get much better than that. But now I can see that Kingdom of the Wicked was just a stepping stone to tell us about the Accelerator.

For the majority of this book I thought, it was just going to be about the Sanctuary war. This made the book was very good in my eyes but not as amazing as the previous titles. Then suddenly, out of nowhere...we get that plot twist. Yeah, YOU know the one I mean...

I mean, I was in tears when that happened. I couldn't believe it.
And btw, I was actually spoilered on that twist BEFORE it happened, years ago, because I was a dumbass who went on the wiki. I...just kinda blotted it out of my memory. It didn't make sense, you know? Why would he DO that?

But he did, and...yeah, I can't really talk about it anymore.

It doesn't stop there. Warlocks. Darquesse. China. I, I just can't express how awesome that part was...In the last half hour, I was really afraid for China. She gave it her all.

In summary, this book is at least as fantastic as Kingdom of the Wicked - and it really gets good in the last part of the book. People keep dying left right and centre, until I really began to fear that ANY of my favourite characters would be left alive at all!

Just one book left to go. One. Book. I'm scared of what will happen. I don't know how it's going to turn out, because I don't think anyone's really had the advantage over Darquesse before and even the Sceptre of the Ancients might not be enough? That's what I'm thinking really. Like, even when Lord Vile fought her they were pretty evenly matched but I always got the idea that Darquesse was a lot stronger.

And what she did to...you know. Near the end. It's a spoiler if I say it. That was just brutal. I don't know if he deserved that. Yes, he did terrible things which ripped them apart but if anything then death would be better than that.

I am going to be so sad when this all ends. Probably even pick up Demon Road after this. 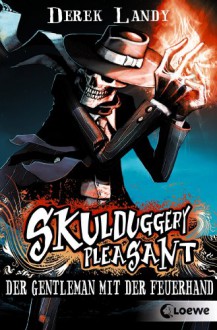 The front cover looked exciting. The name'Skulduggery Pleasant' appealed to me. The Blurb, well... it was....... short. This book was a good read and pretty short(like the blurb). Not much happened but it was a good introduction to an 8/9 book series and It wasn't exactly boring.

I began to read and found out about some characters and life- which are pretty normal. I was getting into it. as soon as Skulduggery stepped in I was gripping on to the book. I thought he was the bad guy, but turns out he's good and a detective. As soon as the action began, I was actually interested in reading the next book. I think it was a bit rushed at the end but the conversations and the characters were unique and made the book twice as better as I thought it would be.

Some things I liked about the book:
China- I don't know why, even though she's really rude, I find her character interesting. But I actually HATE her. The thing I really like was how he controlled Stephanie using JUST her name???? How crazy is that?
Stephanie's new name: Valkyrie Cain.
The action and mystery of the death of her Uncle.
It was just generally a good book and I enjoyed it.

QUESTION: WHY DID SKULDUGGERY BEING AS SKELETON NOT FREAK OUT STEPHANIE? HOW DID NO-ONE ELSE REALISE?

QUESTION: HOW DID STEPHANIE COINCIDENTALLY HAVE MAGIC?