Log in with Facebook
or
Wrong email address or username
Sign up
Already on BookLikes? Log in!
Incorrect verification code
Please, check your email, the code to access your BookLikes blog was sent to you already.
Enter code:
« Back Send
back to top
Search tags: Sweetwater 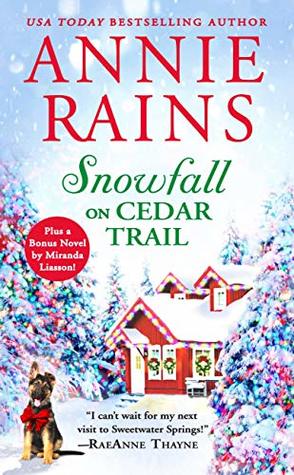 Sweetwater Springs #3, Holona and Alex have been dancing around their attraction for years, since they were both young, but because Alex was best friends with her brother he never wanted to cross that line. Holona ended up getting married and having a son, her husband was a big football star who died in a skiing accident shortly after divorcing her. Holona loved her husband but their was a side of him she never wanted anyone to know about unfortunately Alex was witness to that once but Alex still only knows half the story.

Alex thinks that Holona doesn't want anything to do with him because that one time he arrested her husband, but fate keeps putting them together and finally when Alex gets picked to be her son's mentor

they finally give in to the attraction. Holona's son, Theo, stopped talking after his father died. Holona always doing what she thinks is best for her son she enters him the new mentor program hoping he can find a good male role model.

Alex is tormented by the unsolved murder of his father. Ever year he reopens the case and questions the witness again and tries to find who killed his father. This year is different this year he was given a clue, and now he's worried that going after this person might put Holona and Theo in jeopardy.

Overall, this was a really great read. It's just over 300 pages and it goes by so quickly. The cuteness factor is really high with both Theo and Officer Chew the foster puppy Alex takes in. The romantic build up between Alex and Holona doesn't take long and their chemistry is great. Even as book three this works as a stand alone but all three books and the novella are wonderful reads. 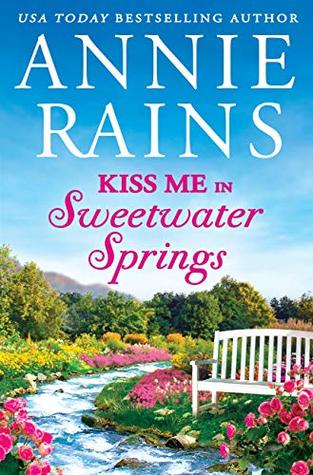 Sweetwater Springs #2.5, Paris moved to Sweetwater Springs looking for a home, he once lived there as a child and was being bounced from different foster homes every couple of months. His foster parents were stern but welcoming and loving it was the only place that felt like home and Paris was looking for that again after his nasty divorce and maybe reconnect with his former foster parents. Lacy was born and raised in Sweetwater Springs and had the worst high school experience. Despite this she still loved her hometown and moved back after college and became the towns librarian. Lacy is determined not to go to her reunion she doesn't want to relive her past but between her family and friends she halfway to changing her mind and if she could claim she was dating someone like Paris then maybe her old classmates might see her differently now. Lacy makes Paris a deal be her date for her reunion and she'll help him connect to the cantankerous old man his foster father became.

Overall, a short and sweet story I very much enjoyed. Both Lacy and Paris deal with past hurts and learn to love each other. They really are good for each other; the tattooed bad boy image Paris puts off riding his motorcycle and the shy bookish Lacy bring out the best in each other. I am glad Paris got his HEA I fell in love with his character from the first book. This can be read as a stand alone told from a third person POV. Annie Rains packs a punch with this novella, humor and romance with plenty of heartfelt emotion. Jones flexes her creative muscle with a side of her personality that we as readers don't often get to see. Always tempting this time around she proves her versatility with neverending humor and ever present emotion. The Truth About Cowboys is a tale of past regrets, present disappointments and the chance to begin again. With characters that wrap themselves around your heart and refuse to let go, how can you not love every minute of this irresistible tango of love.
first-reads
Like Reblog Comment
show activity (+) Reining In Justice is a great romantic suspense by Delores Fossen.  Ms. Fossen has delivered a well-written book that will keep you guessing who the bad guy is until the reveal.  Addison and Reed are divorced.  Without Reed's knowledge, Addison hired a surrogate to carry her and Reed's baby.  Now the surrogate is dead and strange things are happening.  Reed and Addison's story is loaded with drama, humor, spice, action, suspense and a fabulous cast of characters.  I enjoyed reading this book and look forward to reading more from Delores Fossen in the future.  Reining In Justice is book 6 of the Sweetwater Ranch Series but can be read as a standalone.  This is a complete book, not a cliff-hanger. My heart has just been touched by a rainbow. Sophie Mays turns heartbreak into sunshine with a creativity that inspires and entertains. The Sweetwater Island Ferry Collection takes two of my favorite pastimes, romance and home improvement shows, sprinkles a handful of wisdom and an abundance of heart in order to design an unforgettable finished product. Color Me addicted, because I'm hooked.