Log in with Facebook
or
Wrong email address or username
Sign up
Already on BookLikes? Log in!
Incorrect verification code
Please, check your email, the code to access your BookLikes blog was sent to you already.
Enter code:
« Back Send
back to top
Search tags: Techxorcist 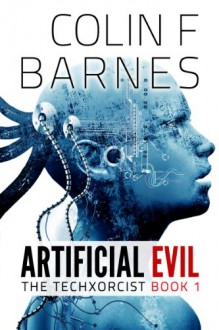 This is an excellent first book in a series and something that I think should be added to the "must read" book for anyone interested in either cyberpunk or dystopian literature, since this is a crossover into both genre.

In the future, after the world has collapsed, citizens live in a Dome with "The Family" in charge and in space, watching over them. To prevent overpopulation, there is a Death Lottery - everyone has a chance of winning! Except those who are in The Family and those who created the D Lottery algorithm itself. But something goes wrong, and Gerry, one of the highest on the exempt list as someone who helped code the D Lottery, has been chosen to be a winner. This gives him a one week left to live before dying.

And only one week to find out what went wrong and fix it.... because if he can be pulled for the Death Lottery, what would stop the President of one of The Family?

This book can currently be downloaded for free at http://www.amazon.com/dp/B00AABHSXG/?tag=shasworofboo-20

First of all, let me wholeheartedly endorse the Blade Runner, Mad Max and Exorcist mentions above. And I'm also going to throw in a heavy dose of The Matrix, a sprinkling of The Amtrak Wars and a hint of Neverwhere. If you enjoyed any of those, you should give Artificial Evil a go. And if you enjoyed all of them, you should DEFINITELY give Artificial Evil a go, right this minute, because you'll love it.

It's hard to know where to start with reviewing a title like this one. Unfortunately I don't have Gerry's skill with logic and data flow management, and having only just finished the novel my mere human brain is still processing the mass of information Barnes presented. It was a complete and utter roller-coaster ride of a read, packed with tech concepts that will merrily blow your mind when you try to unravel them. I had absolutely no idea where this was going and just sat back and let myself be led and entertained. It was such a cinematic read, the action and dialogue were outstanding, the pace was relentless and the world-building was innovative. A total Blockbuster of a read. Complete with a couple of nice shockers when it comes to twists.

The Matrix comparison is the easiest one to make here. Barnes presents a world where things aren't what they seem, where a comfortable existence comes heavily coated with deceit, and where getting to the truth is gritty, costly and completely brutal. Computer code is deep at the heart of everything within this novel, and if you're not at all familiar with coding and networking this isn't going to be your thing. That's probably a ridiculously obvious comment to make, I mean, I'm not big on trying to label something this innovative, but if I had to, I'd go for Cyberpunk. And you're not going to be picking up a Cyberpunk novel if you're not into computers at some level. At least in my experience. Whereas with The Matrix a lot of non-codey folk still enjoyed it on one level, with the visuals and general shininess of the franchise, with Artificial Evil Barnes goes pretty deep into Algorithms and programming concepts, the technology here is innovative and involved, and especially towards the latter part of the novel you'll struggle if you're not familiar with the basics ("Read up, code-monkey.") I work with computer code all day long, and malicious code at that, so I had a complete blast with the technology here.  I can also think of a couple of colleagues who are going to be adding this one to basket on Monday. I know not to recommend this to my Mum though, who loved the Matrix, but wouldn't get past the first 25% of this without getting baffled, distracted, and then disinterested ("You won't understand, and really I don't have the time to explain fully.")

The fusion of old and new was a nice touch here. I love to see 'outdated' technology being used to subvert the state of the art stuff, with a good added dose of inventiveness and intelligence ("like modern day alchemists.")  I always have, and always will. And I really enjoyed the notion of coded Evil being fought with coded 'Good' - I thought that was conceptually utter genius;

"Gabe was actually typing biblical commands to the demon: a piece of code, albeit an artificially intelligent piece of code. That idea raised its head again: had someone coded evil?"

The 'standards' of Post-Apocalyptic fiction are all here, or in this case, Post-Cataclysmic. (If it 'aint broke..) The ruling powers are all well and good provided that you're living under their roof and under their rules. Dare to be different in any way, or commit even the tiniest indiscretion, and it's Game Over. Barnes does a great job of portraying them as all-powerful and, initially, terrifying. I have to confess though, there is one aspect of their power..the ability of a patrol to swab Gerry's vomit on the street, DNA match him and convict him as a criminal without a jury...now I'd be lying if there wasn't a part of me that would love to see that implemented in Swindon of a Saturday night. Outside of the boundaries of the powers-that-be we have the standard 'world that shouldn't exist but does', in this case, The Abandoned Lands. Complete with "Hungry Natives". This is where the Mad Max comparison comes into play, and it's absolutely brilliant. The sub-cultures that exist out here, beyond the very fringes of society, are what made the novel for me. And it's where Barnes' writing really shines. His characters and his dialogue are so spot-on, it's just a pleasure to read. The subversion, the will and the innovation to survive, fantastically entertaining stuff ("This is the Wild West, Doc.")

There are so many positives to this novel. In the wonderful words of Enna "I've not been this excited since I made my first self-aware sexbot." I loved it. And my only complaint is that I want to know a lot more about the 2153 world. The only reason I've gone four stars instead of five (I'm not big on stars in general, but if I have to do it for GoodReads & Amazon I might as well explain myself) is that I thought in several places Barnes got a little too caught up in the technology, and the time and effort spent there made other parts of the novel feel a little rushed and cramped. It's so, so central to everything that other aspects were a little bit too marginalised for me. And of course a side-effect of this is that it will alienate some readers. It would've been nice if the tech element could have perhaps been diluted a bit to let others in and open the field up for some more world-building on a social and economic level. In fairness though I'm aware it's key to everything, and I'd imagine Barnes' blood would run cold at my 'dumbing down' dilution suggestion. It was, regardless, an exceptional read, and I will definitely be reading the sequel.

I totally admit I grabbed this while it was a freebie because of the spectacular cover. (I was very much reminded of an equally spectacular, if spectacularly bad '80s Australian movie called Circuitry Man - you get a cookie if you've ever even heard of that one.) The rest of this series has equally striking covers. They'd make fabulous posters actually.

No prizes for guessing the genre from the cover either, this is pure dystopian cyberpunk. A largely unexplained cataclysm has made the earth more or less unliveable, with "City Earth" the remaining safely domed city run by "The Family" via a figurehead government. At least that's what everyone thinks. Our hero Gerry discovers he's somehow been hacked, and declared winner of the "Death Lottery" and has a week to live, something he should have been exempt from as the creator of the lottery selection algorithm. Dead men have no rights, and lying beaten on the street after trying to get into his own workplace, he's picked up by a strange man who declares his code is possessed, and he needs exorcising. And it only gets weirder for Gerry after that. He discovers everything he thought he knew about his life, about his home city, and about the entire world and even humanity in general, may not be true.