Log in with Facebook
or
Wrong email address or username
Sign up
Already on BookLikes? Log in!
Incorrect verification code
Please, check your email, the code to access your BookLikes blog was sent to you already.
Enter code:
« Back Send
back to top
Search tags: The-Dining-Club Touch, the fifth installment of The Dining Club Series, begins right where we left off and ends on the biggest cliffy so far, and has Grace thinking that she wouldn't be opposed to Andrew joining in whatever is planned for later in the evening. Which. Whatever.

That's pretty much the way I felt about this novella's challenge. And the series as a whole. I still don't understand David's motivations--does he want Grace to succeed or not? He doesn't even know. He says things like this:

"Remember failure tonight means you can never return for the final test, and we'll never see each other again. Don't let me down, my darling."

But then he does his best to be sure she doesn't succeed, and thinks things like this:

...this time a part of him wondered if it would be better if he released Grace soon, by ensuring that she failed the fourth trial, rather than ruin both their lives. And that was what would happen, he knew it would, because in truth no matter how perfect she was, or how much he loved her at the start, eventually he would tire of her.

We also get a glimpse of a cockamamie plan set forth by two key players in the story, and more of Grace's friend, Fran's, whining and asking about the size of David's dick. I did like Grace slightly more in this one. Her jealousy made total sense to me, and I'm glad she recognized it.

There were still the things I didn't like, like the cringe-worthy words ("urethra" and "love juices" come to mind) and the douche-baggery in general. I also forgot to mention this in a previous review, but there is a "special lubricant" that's imported from the far East that makes me giggle every time it's mentioned. It's powerful stuff. Maybe I need some of that.
Like Reblog Comment Even though what happens in this novella is not my cup of tea, I'm glad that Grace seems to come to terms with exactly why she's trying to be successful at The Dining Club--it's all to make David happy.

She wondered how she'd ever let it come to this. How she, Grace, a well-respected theater director who'd been in the Sunday Times list of most promising new directors the year before, had allowed herself to be in this position. Tears of humiliation and disbelief filled her eyes.

"What's the matter?" asked David quietly. "If you want this to stop now, all you have to do is say so. That one word will end it all. Say 'stop' and it's over, Grace. You must choose to do this yourself."

"For us," she replied, struggling to regain her composure. "This is for us."

"But the choice is yours. Now do you want to stop?"

Her tongue moved over her dry lips. She hadn't come this far to be defeated now. "I don't want to stop," she said clearly.

I was pretty shocked by Grace's words at the end, and I can't really say what else happens here without giving everything away. I'm pretty sure this was my favorite of all of the novellas, even though I didn't like anything that happened in it. One more to go.
Like Reblog Comment The novella starts off with Andrew letting Grace know what he wants her to hear. Grace questions him as to his reasoning for coming to warn her:

"Because I care for you and don't want to see you hurt by him. Believe me he will hurt you eventually. He doesn't know the meaning of love."

"And you don't seem to know the meaning of loyalty," she pointed out.

Score one for Grace. Fucking finally. Then she says stuff like this, and I'm ready to smack her again:

"David's very complex, and I don't pretend to understand him all the time, but I love him and I want him to love me too. The Dining Club is my only chance of making that happen. He's made that very clear."

Despite Grace and Andrew's very enlightening conversation, this was definitely my least favorite of the novellas. Some really gross stuff happens here, and we get to see even more of David's manipulative bastard side. Does he have any other sides? Oh yeah, the douchebag side.

"Just remember, if you succeed this weekend I'll be happier than I've ever been in my life before. That's all you need to think about over the next two days."

We also get a little more of Fran's sparkling personality.

Is it some kind of posh gym that you have to be invited to join? If so, and if it's expensive, you're being robbed because you don't look any different from the days when your idea of exercise was stumbling to the tube station early in the morning!"

She also asks--yet again--how David is in bed, and outright tells Grace that she'd "have him" if Grace didn't want him. Yes, after she's gone on and on about how much of a ladies' man he is and how he can never commit to Grace for real. I might hate Fran the most of all the other characters, which is really saying something.

Caress ends on a cliffie, but with a more-determined-than-ever Grace. Thank rob it's almost over.
Like Reblog Comment The fourth novella in the Dining Club series has David questioning if what happens if Grace successfully completes all the trials--will he be able to give her his heart and allow himself to become with her heart? For the record, he's still a douchebag.

I like that Grace stands up for herself a little more this time and explains to him:

"Yes, because I love and trust you. This is totally different."

After the trial, which of course I hated, Grace finds that David went to a charity function with a beautiful woman, which I don't even know what to say about that besides I wish Grace would dump him and go for someone who can really appreciate her.

Like maybe Andrew, who seems to have taken an interest in Grace as well. But we find out in this installment that he's a manipulative bastard, too, so I don't know.

This novella seemed to have more substance to it than the previous three, but still not enough. And there was one tiny hot part:

"Don't you enjoy giving me pleasure, Gracie?" he asked quietly. 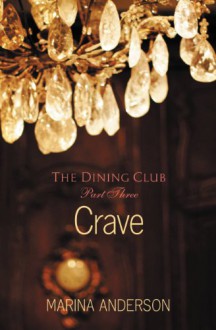 Crave, the third installment in the Dining Club series picks up right where Bound ended. This one has Grace's friend, Fran, warning her that even though David is a rich financier, he's got a reputation for being a ladies' man and never having any intention of settling down. I thought Fran was a total bitch to Grace, and I was surprised that she was giving her all these warnings six months after Grace started dating David. Fran asked Grace repeatedly if David was good in bed, and that was kind of weird to me.

We also see Amber, the girl that runs the Dining Club, explaining to Andrew that she's going to do her best to be sure that Grace fails so that David doesn't fall in love with Grace. David goes to the Dining Club to be sure everything is set up for Grace's weekend and is tempted by Amber, but decides to go home instead of having sex with her, which I liked. The fact that he kisses Amber before he leaves just proves how manipulative he truly is, though.

When it's finally time for Grace's next trial, she expresses fear to which Amber lets her know:

As always, should you wish to quit the trial at any point you only need to say the word and you'll be released from this room. Naturally you would then have to leave the Dining Club immediately. No one can attempt the trial twice, meaning this is your only opportunity to learn if you can take pleasure from something that your respective partners enjoy.

Which. I'm not even going to say it again.

I liked Grace the best in this novella so far. She actually asks what we've been wondering all along:

Yes. I don't understand how, if you truly feel anything for me, you can take pleasure in seeing me hurt. It doesn't make any sense. That's not what a loving relationship is meant to be about."

"I don't want to see you hurt," he said softly, one hand stroking her long, dark hair. "I want you to learn that immense pleasure can come through just a little pain."

"I don't believe that's true. It's cruel and you're being unkind," she retorted, on the edge of tears.

He bent lower, until his mouth was against her ear. "It is true, my darling. If you really loved me, then you'd trust me."

This one ended pretty abruptly, moreso than the other novellas, and didn't seem to end in a place that made sense. Pretty much like the rest of this series doesn't make much sense.
More posts
Your Dashboard view:
All Reviews Text Photo Quote Video URL Activities
Liked posts Top Tags
Press About Terms of Services Privacy Policy Contact Us Blog FAQ Patronaty medialne BookLikes for Authors Partners panel more...
Team Themes Docs API Blogs
Copyright © 2020 BookLikes