Log in with Facebook
or
Wrong email address or username
Sign up
Already on BookLikes? Log in!
Incorrect verification code
Please, check your email, the code to access your BookLikes blog was sent to you already.
Enter code:
« Back Send
back to top
Search tags: The-Flame-in-the-Mist 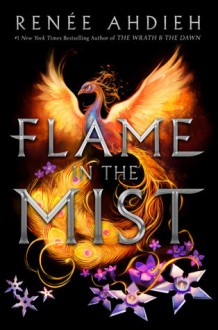 I really quite liked this one. Flame in the Mist was the first book I read by this author and it was a pleasant surprise. It was set in feudal Japan, so it immediately had this mysterious feel about it. Mariko as the main character was a strong young girl who sets out on an interesting quest.

I would like to see where this story is going from here.

I had already written a review for this book but my computer decided not to cooperate and I lost it...

So here we go again!

I really enjoyed this story. I think that Mariko is a great main character. She is so strong and so delicate at the same time; I liked the fact that she still has her feminine side while being a warrior. I agree this is something really typical in most YA books, but I never get tired of it. It is, I think, something important that girls need to be reminded of.

The setting was what appealed to me the most in this book. It takes place in feudal Japan and it is definitely something I’m not used to in YA books! It was amazing to see how Mariko could easily pass as a boy and that nobody noticed. It emphasizes the place of women in this society; they don’t realize she is a girl because a girl would not be capable of what she does. The fact that her brother don’t even recognize her (or thinks he does, but then he knows it can’t be her) is even more reveling.

The plot was interesting but was not what I preferred in the book. It felt a bit too long at certain moments then a bit rushed at the end. But in general, I enjoyed the story.

However, I have one major disappointment: the love interest. I would have preferred it not to happen like that, but then again, it is only my personal opinion.

Also, I thought it was a standalone while reading it and I was frustrated at the end, so I’m really glad there will be other books in the series because I definitely want more of this world.

Hello everyone! I've been away for a long time dealing with my personal life. I normally only post book reviews and musings here, which is why even though I've been blogging on my main blog for a few weeks now, nothing's been posted here, because I've only been doing memes and tags for that, and I'm still not reading anything. But here's a musing I feel pretty strongly about and I wonder if anyone else cares as much as I do?

I wound up with two review copies of this one. I first put in a Netgalley request which I figured was a long shot, and when I didn’t hear anything back in months, I used some of my Penguin First to Read points to secure a copy when it popped up on their read to review site. And then when I’m half way through the book my Netgalley request was approved. Oh well.

I don’t really know what to make of the novel in the end. I gave it a generous 3 stars, but it’s more like two and a half. While I can appreciate the journey of inner strength from the main character, Mariko, I didn’t actually like her all that much. I found the first 100 pages or so incredibly boring. The novel is beautifully written, the scenery is fantastic and the descriptions are vivid and lyrical. The fantasy setting in a Japanese world is fascinating. All marks of a fantasy I should love.

But personally, I just could not get into the plot. I found Mariko almost aloof, I didn’t get much of a sense of personality from her at all. I couldn’t connect with her character in a way that would make me as a reader care about what happened to her.

That being said, as the novel progressed, the plot did get better and Mariko did show some pretty impressive growth and strength. She’s definitely intelligent and determined, you have to give her that. On the way to her politically arranged marriage her carriage party is attacked by a notorious mercenary group the Black Clan. Mariko survives the attack and doesn’t cower in fear. She’s furious and decides she wants to know the reasons behind. Disguising herself as a boy, she follows the Black Clan and worms her way in.

Back in her home province, Mariko’s twin brother Kenshin, is convinced she survived the assassination attempt. Other plots include devious goings on between the Emperor and his Mistress who seems to have some hint at dark dangerous magic and her own political agenda. The Empress who seems quite passive but there’s more to her than meets the eye. The Emperor’s legitimate son (Mariko’s intended) and the illegitimate son with their own squabbles. And while all this is going on Mariko in the guise of a boy is uncovering the inner secrets of the Black Clan.

Of course there are lots of plot twists and everyone has secrets of their own. Mariko uncovers some shocking truths about the lands she came from and how her lord father runs them, and must decide where her true loyalties lie. There’s a romance agenda as well for Mariko when the truth about her identity is revealed. There are secrets within the Black Clan itself.

The plot did improve as the novel goes on and starts getting more into the twisty secrets, there’s a barest hint of some sort of magic involved, but very little of it is explained. Though it’s enough to make the reader want to know more (or it certainly worked that way for me). While Mariko was a difficult character to warm to, her journey throughout the novel is impressive, even with a kind of predictable romance, I want to know what happens next.

Thank you to Penguin First to Read.

I really enjoyed this book. I went into it not really knowing what to expect. I hadn't read anything by Renée Ahdieh before this book but had heard great things about her work. I saw so many comparisons of this book to Mulan that I was a little fearful that this would just be a rehashing of a very familiar story. I had no reason to worry since this was really a very original story. This was one of those books that I found myself thinking about during the times that I couldn't read.

Mariko is on her way to be married when her entourage is attacked. She is able to escape to safety but she has no idea how long she will be able to remain safe. She decides to dress as a boy and find the group that tried to kill her. She does find them and is eventually taken back to their camp. Things start out hard at the camp and she is treated as a prisoner. Eventually, she earns some trust and gets to know some of the members of the group.

The way this story was written really just pulled me in. Everything flowed so perfectly and the pacing was well done. I liked this author's voice a lot. It seemed that the words all came together almost magically to create a story that was beautiful and entertaining. There are a lot of really exciting scenes that are offset by others that are more thoughtful.

The characters were amazing. Mariko is smart and determined. She learns a lot of really hard truths over the course of this story and is able to accept them and decide how to proceed with her life. Okami was a bit of a mystery which I really liked. He was obviously drawn to Mariko almost immediately and I liked the tension between them. They had some really great banter that was a lot of fun.

I would highly recommend this book to others. This is a really great start to a new and exciting series. I seriously did not want it to end and can't wait to find out what happens next!

I received an advance reader edition of this book from G.P. Putnam's Sons Books for Young Readers via First to Read.

Initial Thoughts
I liked this one a lot. I really wasn't ready to end. What happens next? I need to know!