Log in with Facebook
or
Wrong email address or username
Sign up
Already on BookLikes? Log in!
Incorrect verification code
Please, check your email, the code to access your BookLikes blog was sent to you already.
Enter code:
« Back Send
back to top
Search tags: The-Outlaw-Women 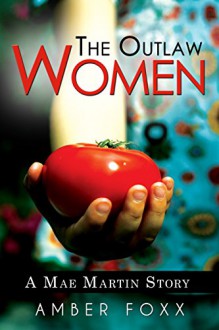 I read the first book in the Mae Martin series last year but it wasn't really something for me. (You can read my review of The Calling here)

But since I already downloaded this free short story that was set before the series, I decide to read this short story featuring Mae's grandmother who's still imported in (at least the first book of) the series.

And I enjoyed this story more than the actual book (for as far as I can remember). The writing was good and there for once actually was some kind of a mystery was going on. For anyone who likes the series, I'd definitely recommend it. It used to be available to read on GoodReads but I can't find it any more.

The Outlaw Women is a short story set before the rest of the series. The Calling is the first book in the Mae Martin Mysteries. 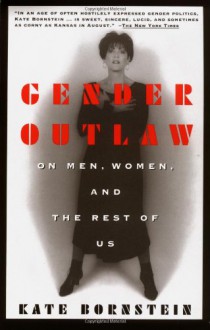 OK, I'm not getting sleep any time soon, so I am going to go ahead and write this review.

I loved this book. I love it a lot. I already knew I was going to, as Bornstein left a hugely positive impression on me during her key-note speech at Gender Odyssey '15. The book is pretty dated, but the message on the gender binary is something that speaks across the years of shifting cultural landscapes of the LGBT community. Her points on the concept of androgyny simply reaffirming the binary by implicating male and female as two natural bases and everything else as an in-between of those bases, were especially nice to see put into words.

While I agree with basically all of the meat of Bornstein's theorizing and critiques regarding the binary gender system, the issue of its enforcement particularly on transgender people, and some criticisms of the cisgender LGB populations, there were a few things I have to criticize.

(ETA: I forgot to include this in the review:)

The big one I disagree with is Bornstein saying that when it comes to homophobia, it is all based on gender nonconformance, and sexual practice has nothing to do with it. As a gender nonconforming gay trans man, I extremely disagree. Yes, when you are noticeably GNC, noticeably read as 'gay', you are opened up to so much more scrutiny, debasement and violence from homophobes. But that doesn't mean gender-conforming, "straight-passing" gay people are in the clear. How many times has a gay person gotten along in life without anyone realizing they were gay, because they don't "look or sound gay", and then ended up dead as soon as they think it's safe to come out?

Hetero perceptions of "gay sex" are absolutely a huge part of homophobia. The very basis for homophobia in Western society comes down to Leviticus 18:22: "Thou shalt not lie with mankind, as with womankind: it is abomination." How much homophobic rhetoric and insults from straight men directly target sex between men? How many straight men flip out when learning a friend or acquaintance is gay, because "what if he tries to fuck me?" How much of the disgust straight men voice for gay men comes down to the idea of bottoming for anal sex or sucking another man's dick, because it's "the woman's role" and debasing, that to be the receptive partner is a sign of weakness?

"Gay sex" in itself could be seen as transgressing SEXUAL gender roles (gay/bi men taking the "woman's role" and vice verse for lesbians/bi women), which could then fit into Bornstein's theory, but she went out of her way to assert her belief that gender roles are separate from anything sexual in the instance of homophobia. It is just beyond naive to me.

Another issue is the insinuation that BDSM subculture and by association other alternative sexuality/kink subcultures are inherently "queer" and thus face the same issues as LGBT people. Very untrue. I don't know what it was like in the 80s/90s, and I don't know what it was like in Bornstein's particular S/M scene, which she describes as lesbian S/M, but overall kink scenes are definitely dominated (no pun intended) by cisgender-straight kinksters. The sides of these subcultures where cis-straight people make up the bulk of enthusiasts is usually homophobic and transphobic, either overtly or in a fetishistic way spun into a positive light. This isn't even touching on the sexism/misogyny perpetuated by cis-straight male doms. Also I just hate this assumption that overly sexual subcultures all have to do with LGBT people, a group that has been demonized on the basis of our sexual intimacy, which is usually greatly distorted to OVERsexualize us to better be painted as morally depraved by Christian puritans.

Basically, at the end of the day, cis-straight kinksters are still cisgender and straight, and beyond their sexual tastes they are no different than non-kink cisgender straight people, and they get all the same societal and cultural benefits. I don't see why they should ever be grouped with LGBT people.

Other than that I love this book more than I can properly convey in writing at 6am on no sleep.

I really recommend this to all transgender people, especially if you identify as nonbinary, genderqueer, or are gender-non-conforming.

A reader asked if I find it hard to write outside the mystery genre. Actually, I feel as if I’m always both in and out of it. I’m a genre nonconformist. My series not only blends genres within books, but shifts genre to some extent as it moves along.

My decision to write this way came after I tried to write about crime, death, and violence and realized I couldn’t do it. I wasn’t going to be a happy writer, and my protagonist was going to be damaged by repeated exposure to things like that.  I read murder mysteries but that’s a different level of involvement than creating them. There are more ways in which life presents mystery than murder, and some periods of life are more romantic, others more suspenseful, others full of family difficulties and personal growth, and there’s often something going on that we don’t understand—a mystery, but if we’re lucky, not a murder. Human behavior is often bewildering. And those phenomena we can’t explain—shared thoughts, psychic experiences—those are their own kind of mystery. My protagonist is psychic.

In The Outlaw Women, the free short story that’s a prequel the series, there’s precognition and a psychic connection, but no mystery to solve. The story is classified as literary fiction and contemporary fiction, which may be a good way for readers who enjoy what I write to find my series.

The Calling has been reviewed as literary fiction, or realistic fiction with paranormal elements, and as mystery in the sense of finding out secrets, but not a whodunit. All true. I put a tag line on my series, No Murder, Just Mystery, so readers won’t be waiting for the body, the shot, the explosion, the kidnapping, the more violent elements of a standard mystery. In The Calling the only things that blow up are people’s relationships and hopes and plans—and ideas of about the nature of reality. Shaman’s Blues gets closer to a conventional mystery. There are missing people, and a puzzling death in the past, but still no violence. The real mystery in this book is a person, in a twist on romance that turns most of the elements of that genre upside down. The third book, Snake Face, coming out in the fall, gets close to being a suspense novel.

Why all these genre shifts? Different things are asked of Mae Martin as she develops as a person, and as a psychic and healer. In the fourth book, Soul Loss, now in progress, the mystery surrounds events happening to other healers and psychics, and Mae’s role is that of a professional in those fields, asked to help in a realm only such a person can access. The fifth book (working title, Haunted) is looking like it will have a streak of horror in it (spiritual and psychological, not gory) when woman studying a healing tradition find herself entangled in its shadow side. The sixth book—no working title yet and only a few chapters written—revolves around a mystery in art authentication, art theft, and a stolen parrot. Detective work, but no murder. Rolling through genre according the pattern of my protagonist’s development, I still see a foundation of mystery under it all. Sometimes the question is, “who are you, really?” or what someone has done, rather than “whodunit,” and when Mae is finding out who did something, it’s not who killed someone. No murder, just mystery.

I do have a horror short story and fantasy novella on the back burner. It wasn’t harder to write them in terms of plot, but I love my series so much it’s been harder to make revision and publication of these other works a priority.

Recommended to ☯Bettie☯ by: Amber Foxx
Recommended for: Laura, Wanda et al
Read on June 13, 2014
Opening: The Sight had shown Rhoda-Sue Outlaw Jackson many things over the years, but not the future. Not until a Friday afternoon in September shortly after her seventieth birthday, when Sue heard her late husband speak as clearly as if he stood right next to her in the kitchen, warning her she had only a few thousand heartbeats left. Two hundred and fifty-nine thousand, two hundred and one.

This message from the author:

The Outlaw Women can be downloaded free, a gift to my readers while you wait for the next full length book, which comes out in November. Blog followers who don’t read the series can enjoy it, too, since it takes place before the series starts. You can find the links here at on the home page http://amberfoxxmysteries.wordpress.com. I will update them as the book goes live in more stores. It’s also available on my Goodreads page, https://www.goodreads.com/author/show... .

This was the second book on transgender issues we read for my book club this month. Except for an intelligent discussion on feminist philosophy finding it's way in every now and then, I thought this was only a mildly interesting book on the topic. I did get some insight that I wouldn't have gotten without having read it, so it was worth that. The discussion of queer theatre bored me, but theatre of any kind always has.
More posts
Your Dashboard view:
All Reviews Text Photo Quote Video URL Activities
Liked posts Top Tags
Press About Terms of Services Privacy Policy Contact Us Blog FAQ Patronaty medialne BookLikes for Authors Partners panel more...
Team Themes Docs API Blogs
Copyright © 2020 BookLikes