Log in with Facebook
or
Wrong email address or username
Sign up
Already on BookLikes? Log in!
Incorrect verification code
Please, check your email, the code to access your BookLikes blog was sent to you already.
Enter code:
« Back Send
back to top
Search tags: The-Pickled-Piper-(Pickled-and-Preserved 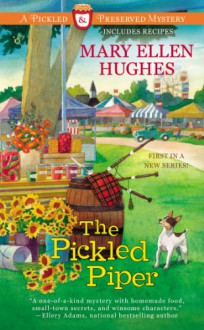 I'm not rating this one because I couldn't even get to page 60 before closing it with a "nope, can't do it".  By page 32 there were so many implausibilities my suspension of belief snapped from the tension of over-stretching.

The MC's (Piper's) ex-fiancee is a lawyer working in the district attorney's office that has decided to "find himself" by taking off for Tibet.  They break up, and she moves to Cloverdale to start up her picking business.  He calls her from Tibet just to tell her about the dinner he had the night before, and then feigns surprise that she's still in Cloverdale; he seems to not understand that they're broken up.  He's a lawyer.  Unless his degree came from a website I'm having a hard time believing he's that vague on the details.

The murder setup:  Piper's employee's boyfriend (got that?) tried to get a 'gig' as the MC of the local fair's talent show.  He lost out to someone who's done it every year for the last decade, but seems to be universally disliked by everyone in town.  That man ends up dead and the police immediately suspect it's the employee's boyfriend.  Really?  That's the best you can do?  He's the prime suspect because he didn't get to play MC for a two-bit talent show?

During a conversation with her employee, Amy, who is 21 (but already a trained chef), to Piper's 30, I found Piper to be incredibly condescending, saying how her age gave her a "more realistic view of life" - because Amy thought they'd sell a lot of pickles at the fair.  This was just about the point I was ready to give up.  But I kept on - it was only page 9 after all.

The breaking point for me was at the scene of the murder: Piper's fair booth and specifically her giant pickle barrel.  As the police are setting up barriers around the crime scene, a fellow booth owner comes storming over to Piper yelling at her for allowing someone to get killed in her booth, thereby affecting her neighbour's business.  The scene ends with the booth owner stomping off shouting this gem:

"Nothing like this ever happened around here before you showed up with your pickling shop!"

Piper's only been in town a few months and this is the first book in the series.

I've seen reviews for this book that have been positive (although not gushing) so I have to believe there's probably some quality later on in the story - but I just can't bring myself to slog through this to get to it.  It's a bit of a bummer because I'm very intrigued and curious about pickling and I thought this could be a fun read.  I'm not chucking the book - I might try reading it again later to see if perhaps it's just a mood thing.

Piper Lamb has moves back to the place she's called home after calling it quits in a dead-end relationship. Opening a pickling and preserves shop called Piper’s Picklings, things are looking good until a local man is found in her picking barrel and her assistant, Amy's boyfriend is being accused. In order to prove his innocent, Piper puts away her preserves and puts on her sleuth hat. She better be careful because the killer has her in their sight and she may get burned...

This had everything I enjoy in a cozy. Small town feel, good cast of characters and a great sleuth in Piper. Piper lead with her head and didn't go running into danger without second thought, something cozy sleuths can be guilty of from time to time. Piper slowly gather motives and clues, and does she have alot to swim through! The murder victim, Alan Rosemont, was a jerk and made many people of the town very angry. Piper has many suspects but the clues and motives can be a tad hazy.

There were plenty of motives but clues were few and far between. This is more of my own preference as I love putting the puzzle pieces to figure out whodunit and see if I was right *grins* Another trouble I had was the hint of a Love Triangle in the next book. Between Will the cutie Christmas tree framer and Piper's clueless ex is coming back on the scene. I'm hoping it's all smoke and no fire and this triangle is tossed out early and a positive growing relationship is able to bloom between Piper and Will.

A sweetly wonderful start to this new series and as a person who does some pickling herself, some great ideas and recipes to check out- looking forward to book two!

Mary Ellen Hughes has been a favorite of mine since I read the Craft Corner Mystery series she did from 2006 - 2008.   She's been on my Facebook for what seems like forever, and on a personal level is a kind and considerate friend.  I was extremely excited when I heard she had a new series coming out, because it had been way too long since I'd gotten to read a new story from her.

But what about the new book? Okay, okay, I'm getting there!   Coming from a background where my  mother and grandmother pickled, preserved, canned, and froze everything possible from large gardens, I was intrigued by the premise for this series before I ever got my hands on it.  I would never have considered a shop devoted to pickling as a setting, but Mary Ellen sure made it work.   Piper is a likable and engaging herione, and the small town setting is authentic and well done. Not that I expected anything less.

Now I'm not one who always tries to figure out "whodunnit" before the answer is revealed, usually preferring to remain surprised when the author gets there with the culprit in his or her own good time.  So as usual, I never saw the ending for this one coming.  The one thing I did manage to guess about one of the red herrings made me giggle, though.  It's always fun when a character behaves the same way I would, in the same situation!

The Pickled Piper begins a new cozy series and I think it's going to be a good one.  Piper, who moved to the small town of Cloverdale to start over after a romance goes bad is a smart, engaging sleuth and the other characters are just as interesting.

Piper has moved to Cloverdale to be near her aunt and uncle after her fiance, now ex-fiance, decided to travel to Tibet without her.  She decided to open Piper's Picklings, a shop devoted to everything in the pickling realm.  I personally hate pickles and can't image that a shop devoted to nothing else, especially in a small town, would survive but I'll suspend disbelief on that for this book because it's quite a solid story and mystery.

Piper had set up a stall at the fair to sell her pickles but when she comes back the second day, the most disliked man in town is dead in her pickle barrel.  One of her friends, who is also the boyfriend of her much-liked young employee, is suspected of the crime and Piper doesn't believe it for a minute.  She is determined, as all good amateur sleuths are, that the police are looking in the wrong place and she needs to find the killer.

The characters are likeable.  A big plus for me!  There is plenty of romance but it doesn't overwhelm the story and it's fun, not angsty.  And I honestly suspected the wrong character almost the whole way through. A smart, likeable heroine, interesting characters, good editing and a solid mystery.  This is a winner for me.

I received this book through the Goodreads FirstReads program and I appreciated the opportunity to read and review it.